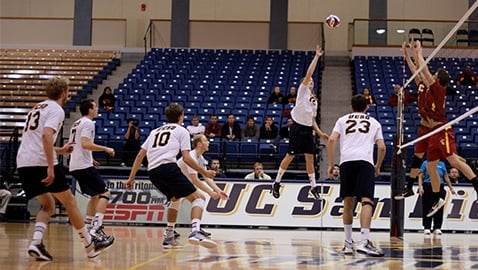 The UCSD men’s volleyball team suffered two tough losses in its season openers last week. On Friday, the Tritons fell to Mountain Pacific Sports Federation opponent USC in straight sets before losing on the road to Pepperdine the following day.

“We’ve opened the MPSF season with two very good teams in USC and Pepperdine,” UCSD head coach Kevin Ring said to the UCSD Athletics Department. “For us, it is a matter of getting comfortable competing night in and night out and the ability to play good, solid volleyball from start to finish. Each game we’ve played in has had bright spots. As we become more consistent, we’ll begin to win the close games.”

Facing off against sixth-ranked USC on the road, the Tritons struggled on their side of the net. UCSD tied the opening set at 5–5; a four-point run soon extended the Trojan lead to 15–9. The Tritons were unable to get closer than four points over the remainder of the frame.

In the second set, the Trojans took a 13–6 lead before solid Triton blocking gave UCSD its first lead at 23–22. But three straight points earned USC the set victory.

“USC got off to a great start in game one, and although we hit okay, we didn’t do enough to slow their offense,” Ring told the UCSD Athletics Department after the game. “Game two, we did a much better job of pressuring USC with our serve and better blocking.”

Saturday, UCSD headed to Malibu to take on sixth-ranked Pepperdine. A four-point run gave the Waves the early 6–2 lead in the first set.

The Tritons never threatened Pepperdine’s lead, losing the set 17–25. After falling behind 10–6 in the second set, the Tritons were tied the score at 19–19 on aggressive play and solid blocking. But the Waves answered by tallying the next six points and won the set 25–19.

From there, the Waves closed out their fifth straight victory over the Tritons dating back to the 2011 season.

“Pepperdine sided out very well tonight, so we needed to have better offensive production, especially on our first swing in serve receive, to keep us in the games,” Ring said to the UCSD Athletics Department. “Each game, we found a way to string together some good plays and close the gap in the score but never found the means to pull ahead.”

UCSD continues conference play next weekend to face California Baptist on the road Thursday, Jan. 16, before returning to RIMAC for their home opener on Saturday, Jan. 18, against BYU.