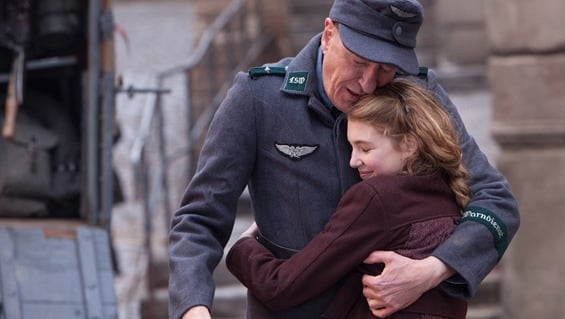 “The Book Thief” finds lightheartedness in a dark historical period

When thinking about the context in which to set a movie for the young, the Holocaust doesn’t come to mind. But director Brian Percival (television’s “Downton Abbey”) adapts Markus Zusak’s bestseller “The Book Thief” onto the big screen, bringing light to the tragic reality of the Holocaust. While the film takes away the seriousness of the Holocaust with a child’s more innocent perspective of Nazi Germany, “The Book Thief” remains highly engaging, thanks in no small part to the phenomenal cast behind the characters.

The storyline revolves around 12-year-old Liesel Meminger (Sophie Nelisse), whose life is ironically told by an offscreen narrator called “Death.” The film begins in 1938, where we see Liesel journeying on a train with her mother and brother; her brother quickly dies from malnourishment and sickness. She is soon taken in by a German couple, warm-hearted Hans (Geoffrey Rush) and his lippy wife Rosa (Emily Watson). When Liesel is made fun of by her schoolmates for being illiterate, she jumps at the chance for Hans to teach her how to read. After watching the infamous Nazi book burnings in her own backyard, and still desiring to read, she begins to “borrow” books from the burgermeister’s library.

The reality of the historical situation interplays with the introduction of the character Max (Ben Schetzer,) a young Jewish man whom Hans and Rosa secretly hide in their dark underground. He also awakens Liesel’s love for books: She begins to read to him while he is in his bed, struggling with possibly terminal illness.

The audience gets a sense of how Jews were treated by the Nazis: Max comes to the Hubermanns’ terrified of being caught by the Nazis, and after he arrives, he is not allowed leave the basement — but the film lacks the cruel reality that made the Holocaust what it was. In one scene, Nazi soldiers march sad-looking Jews down the street of Liesel’s community, but their fate is not revealed. Similarly, Liesel and her young neighbor, Rudy (Nico Liersch) are depicted as young innocents apart from the reality of the society they live in, although they still wear a school uniform covered in swastikas. While some might argue that these elements are necessary to fully capture the essence of the time, toning down the dark elements allows for a focus on the lovable, fairly optimistic main character.

What saves the movie and ultimately makes it successful is the outstanding performances of the cast, who make these characters loveable. Rush and Watson’s characters serve as a compelling, yet humorous duo. Rosa’s bitter personality clashes with Hans’, who is constantly rolling his eyes at her. Their interactions provide comic relief for tense situations, like when their attic is checked to ensure no they aren’t hiding any Jews. The sister-brother bond between Liesel and Max is precious: Their undeniable love for reading brings their relationship closer, and they both desire to protect one another at any cost. Rudy serves as Liesel’s partner in crime, and the friendship between them is charming. Each character’s personality is strong, and their interactions, whether with Liesel or among each other, are delightful.

Although the movie appears to be a “kid-friendly” version that glosses over the Holocaust, the film is captivating to watch. The decision to tell the story in a less violent way might make some angry; but overall, recounting the Holocaust is not the intention. Even though the horror of the Holocaust cannot be undone, the film does a successful adaptation of what the book tries to achieve through its characters: inspiring young individuals to read and write.