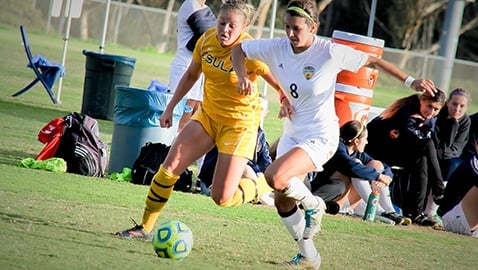 The UCSD women’s soccer team ended its season with a 1–0 loss Sunday, Nov. 3 when, 42 seconds away from a draw in a must-win game, it allowed the deciding goal against Cal State Los Angeles.

The loss came two days after a goal by redshirt sophomore defender Michelle Yasutake in the 81st minute allowed the Tritons to fight for their playoff lives, defeating Cal Poly Pomona 1–0.

“Michelle has been incredible all year,” UCSD head coach Brian McManus said. “She moved from left back into the sweeper position, and she’s done it tremendously. She’s been tremendous all year.”

Against Pomona on Friday, Nov. 1, UCSD’s second-half performance was a complete reversal from the first 45 minutes. UCSD had zero first-half shots, and while still being outshot 18–5 on the night, UCSD proved to be the stronger side after the break. Yasutake’s late goal was vindication for the team after a tough night’s work.

On Sunday, Cal State Los Angeles controlled the tempo for much of the match. But an exciting second-half Golden Eagle goal made for a dramatic overtime period. In extra time, CSU Los Angeles hit the post at the end of the first overtime before sealing the victory in the waning minutes of the second. Sophomore goalkeeper Kelcie Brodsky made eight saves overall, keeping the scoreboard level for 119 minutes.

“To be fair, I thought overall today, they were better than us,” McManus said. “I’ve got to give credit to L.A. They came out with a great game plan, executed it, and they edged us today.”

Sunday’s regular season finale marked the final home game for senior Laura Zellinger, who made her first career start for the Tritons, and captains Rachel Leslie and Izzy Pozurama.

“It’s sad, but it’s a learning lesson, hopefully,” McManus said. “Overall this year, I’ve got to admit, looking at it, we just weren’t good enough. We’re young, but at the same time, we’re just not good enough.”

UCSD has qualified for the California Collegiate Athletic Association Championship tournament every season since it joined 13 years ago. The loss to Cal State Los Angeles ends that run, and it means that UCSD will not win the CCAA South Division, won in 2011 and 2012.

“[Had we tied] today, we might have edged into the playoffs,” McManus said. “Now, it’s going to depend on a lot of results — who wins the conferences, and who does well.”

The top six teams in the West Region will qualify for the NCAA Championship tournament. Before last week’s results, the Tritons were ranked No. 4, two spots ahead of Cal State Los Angeles, but after failing to qualify for the CCAA tournament, UCSD will be left out of the national tournament, ending the season ranked eighth in the region.

Although this year marks the first time in recent memory that UCSD’s season has ended in the beginning of November, the young squad has hope for success next year. Next season, the Tritons will return its top two scorers — junior All-American Cassie Callahan, who scored six goals in 2013, and freshman Jamie Benedetto, who scored four.