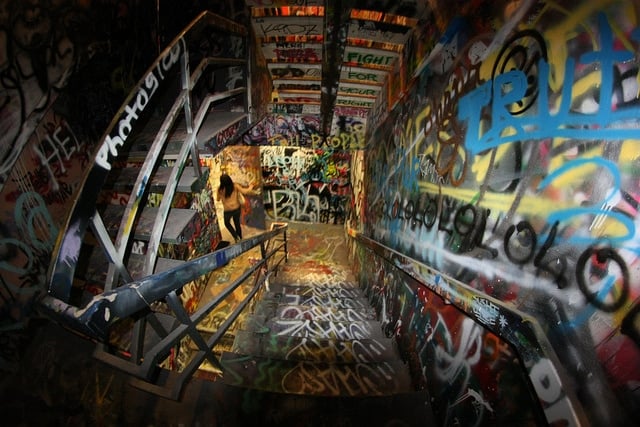 UCSD Vice Chancellor Gary C. Matthews’ yearly base salary is $275,000. His newly enacted policy on Graffiti Hall — which resulted in the arrest of Dean Burdeaux, a psychology major from the senior UCSD class, among other things — shows Matthews to be overpaid since no reasoning was involved beyond the “Intrusive, Safety Hazard” parameters.

In part, because of the dramatic expansion in the ranks of non-faculty campus administrators, colleges have enacted stringent codes. These codes are sometimes well intended, but, outside of the ivory tower, would violate the constitutional guarantee of freedom of speech. From protests and rallies to displays of graffiti, students have been severely constrained in their ability to demonstrate their ideas.

I used to read classical poetry in English on a weekly KCST radio show.  Back in 2012, I read the complete poems of English poet John Milton and American poet Walt Whitman.  Eventually we KCST disc jockeys were informed that surveillance cameras would be installed to catch malefactors in the studio (The stated purpose was to catch wine imbibers).

So I resigned. The speech codes are at times intended to enforce civility, but they often suppress free of expression.

Burdeaux’s transgression was documented by security cameras, and he was taken off to county jail on the cold evening of Sept. 27, 2013.

Were he still alive, Albert Einstein’s response to the painting over of Graffiti Hall would probably have been, “Vey iz mir” — “Woe is me.”

Einstein’s work in his “miracle year” (1905) eventually led to the discovery of X-ray crystallography, the photoelectric effect and transistors. On April 6, 1914, Einstein moved to Berlin, and it was there that he gave his inaugural speech to the Prussian Academy of Sciences. Less than six months later Germany declared war on Russia. The Einsteins’ street address throughout the Great War was No. 5, Haberlandstrasse, Berlin.

A court in Germany has ruled that Germans today are allowed to stick their tongues out for their passport photos. The plaintiff (after being emphatically told not to do what he did) gave his reasoning: “I brought it before the court as a tribute to my hero, Albert Einstein.”