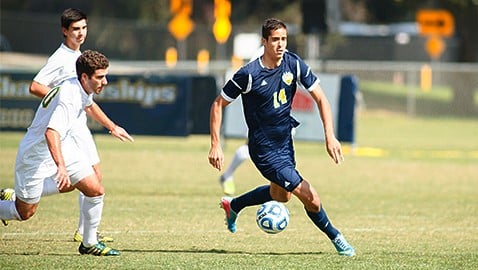 If the UCSD men’s soccer team can manage to win three out of its last four games, the Tritons will make their first postseason appearance since 2005.

The Tritons currently sit in third place in the 12-team conference, with 26 points, one point behind second place Cal State Los Angeles and two points behind first place Chico State. All three squads come from the California Collegiate Athletics Association South Division — barring any late-breaking developments from the North Division — will qualify for the tournament.

When asked if he has started to think about the CCAA Tournament, senior captain Alec Arsht says the team is still trying to focus on taking each game as they come.

“We’re not really worried about the postseason right now,” Arsht said. “We’re trying to take it one game at a time and think about the playoffs when they come, I guess.”

After snapping a seven-game win streak, the Tritons followed up with a 1–1 tie against South Division opponent Cal State Dominguez Hills on Friday, where both squads scored off penalty kicks.

In the 65th minute, center referee Gil Beanland issued Brett Sampiere a yellow card in the box. Beanland and company — whose officiating was called into question by UCSD head coach Jon Pascale — issued four yellow cards, two penalty kicks in a 110-minute bout, as well as a red card in the following women’s soccer game.

“I was in a dark place leading up to [our penalty kick] and certainly had a number of conversations with the referees,” Pascale said. “But it’s a great feeling to watch your team battle back.”

CSU Dominguez Hills’ Alejandro Covarrubias took the penalty, putting the Toros up 1–0. The Tritons earned the equalizer with five minutes left in regulation time on a penalty. UCSD’s Andisheh Bagheri scored low in the bottom-left corner against 6’4” goalkeeper Markus Dickerson.

Bagheri has taken and finished all four of UCSD’s penalty kicks this season.

When asked how Pascale picked his penalty takers, the five-year tenured head coach said there was no decision to make when sending Bagheri to the mark.

“There’s no decision making — it’s all Bagheri, all the time,” Pascale said. “He stepped up early on in the season, and he’s been good from the spot since.”

On Sunday, Oct. 20, the Tritons earned their ninth shutout of the season, winning on another Bagheri penalty granted in the 38th minute.

This Friday, UCSD will face San Francisco State at 7 p.m. and on Sunday will take on Cal State Monterey Bay.

“They’re two good teams,” Arsht said. “Every team in the conference is good, and there’s not one game that you can expect to have handed to you.”