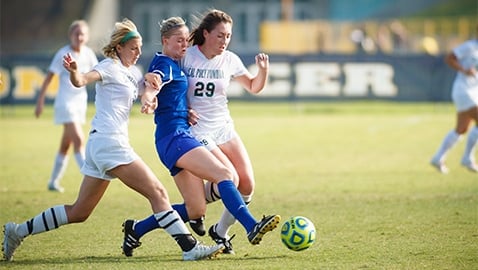 Every game is now a must-win for the UCSD women’s soccer team as it heads into the final two weeks of its season.

The result of a winless weekend, where UCSD was shutout by Cal State Dominguez Hills 2–0 on Friday night and drew with Cal Poly Pomona 2–2 on Sunday, the Tritons have been knocked out of playoff position.

Against the Cal State Dominguez Hills’ Toros on Friday night, UCSD had what was easily its worst performance of the season.

“That is probably the worst first half performance that I have ever seen from a UCSD team,” head coach Brian McManus said after the game. “The second half there was a little bit more but still nothing like the intensity needed. Dominguez Hills came in with all the intensity. They were willing to put their bodies on the line, and we weren’t able to do that.”

Not even the advantage of playing most of the second half a man up — after Dominguez Hills’ Gabrielle Pena was issued a red card — could shift the momentum to the Tritons.

“We’re looking for some composure and some leadership on the field, and unfortunately it just wasn’t there tonight,” McManus said. “Tonight, we didn’t look anything like we looked last weekend.”

The Tritons managed just four shots on goal from freshman Jamie Benedetto, to Dominguez Hills’ 18 shots on the night.

The draw on Sunday allowed UCSD to gain a much-needed point, and while no team emerged victorious, McManus was happy with the team’s improvement from the previous game.

“The first half was disappointing,” McManus said. “We scored a good goal, then we let in a soft goal, but credit to the kids. At halftime, we told them the desire to win has to come from within them. They have to want it. They have to grow up. They have to get that desire and want it, and it was epitomized in the second half. In the end, we’ll take it; it’s a great result.”

Benedetto and junior Cassie Callahan — who McManus raved about after the match — scored goals for the Tritons. .

“Give all credit to Pomona; their second goal was made by two players chasing down what was a bad pass and turning it into a goal,” McManus said. “Then to our credit, Cassie, the one person on the team who shows real desire and bravery to go in the box with the same desire as they had, matched it and got the equalizer for us.”

“It was obvious that Jamie was putting everything into the last bit of the game when everyone else was tired,” Pozurama said. “She did a great job of beating players on the outside and getting crosses into the box.”

With just four games left in the regular season, the Tritons are currently ranked third in the CCAA South Division. To qualify for the four-team CCAA Championships in the beginning of November, UCSD will need to jump second place Cal State Los Angeles, who the Tritons will face in their last conference game.

“The lucky thing is that we get to play those teams so our fate is in our own hands,” Pozurama said. “If we win our last four games, we will have a spot in the CCAA playoffs.”

UCSD now must prepare for another tough weekend at home. They play San Francisco State at 4:30 p.m. on Friday,, and Cal State Monterey Bay comes to Triton Stadium at 11:30 a.m. on Sunday. CSUMB is one point ahead of UCSD in the CCAA standings.

The Tritons — the former NCAA National runner-up — will have no shot at advancing into the national tournament without winning the conference tournament.