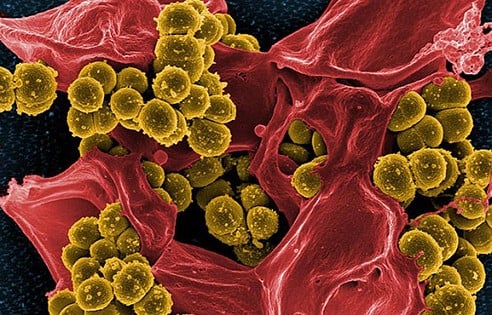 In an effort to combat drug-resistant bacteria, UCSD molecular biologists Joseph Pogliano and Kit Pogliano have developed a shortcut for discovering new antibiotics and understanding how they are killed. They call it Bacterial Cytological Profiling.

Bacterial Cytological Profiling works as an autopsy for bacteria cells. It’s a fast way for scientists to show the specific effect an antibacterial drug has on bacteria cells by identifying what internal process the antibiotic disrupts in a bacterial cell.

“A bacteria’s internal process is fairly simple — like an old computer — and how it crashes is how it crashes,” K. Pogliano said. “Consequently, in understanding the cause for bacterial death, we can better develop more effective drugs to help combat the increasingly drug-resistant bacteria.”

The BCP project began more than a decade ago when both professors were involved in early research on bacterial internal organization. Over time, they began to study antibiotic effects on cells and develop techniques to look at bacterial cells.

K. Pogliano said that she was compelled to pursue this project in order to move her research in a practical direction and help people with bacterial infections receive better treatments. According to K. Pogliano, her father once contracted a mixed-species infection that rendered him disabled. However, the development of BCP has brought her one step closer to helping people like her father.

“We have a small startup company that we have founded to make this technology available to the pharmaceutical industry, in addition to trying to make this a more robust method that is faster and more applicable for early stage drug discovery,” K. Pogliano said.

Despite the achievements that the research team has made, K. Pogliano believes that there remains many challenges to face and questions to answer. She stated that BCP is still a relatively new process and that it is still unclear, if at least mechanistically, why the technique is so effective. Furthermore, K. Pogliano says another challenge is discovering the right molecules for the antibiotic. The difficulty, she stated, is that many molecules are unusable due to their toxicity or simply their inability to pass through the liver’s filter.

However, in spite of these challenges, it appears that both the scientific and pharmaceutical communities have been receptive towards BCP. K. Pogliano explained that before BCP, companies often had difficulties discovering the mechanisms a drug uses to kill bacterial cells,  yet the FDA needed information on these mechanisms in order to issue an approval. The results BCP provides can tell companies what part of the bacterial process antibiotics inhibit and speed up new drug development.

K. Pogliano expressed that they are always looking for motivated and dedicated students from UCSD to assist in the lab.

“Professor Joe Pogliano and I like to make sure that students have a really high quality environment to interact with a keen mentor,” she said.

In the future, K. Pogliano envisions a deeper understanding of bacterial cells. She hopes to identify new targets for drugs to attack on bacterial cells and develop effective new drugs to meet the pressing clinical need.

“It’s really fun,” she said. “I’m excited to show that basic science can have an impact on improving human health.”