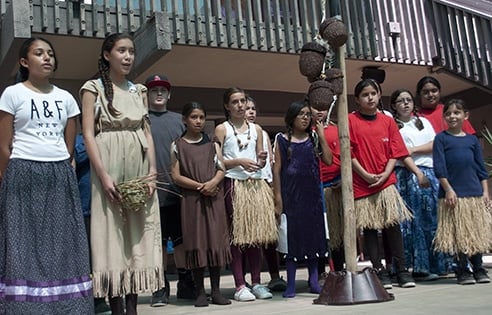 Keynote speaker Carol Padden, a UCSD communications professor, addressed the students on varying topics, from the importance of communication to commending the students for all that they have already achieved.

“A university education is not just about courses you will take and the friends you make here, but it’s about becoming a person,” Padden said during her speech. “Acquire flexibility in your point of view; see the world from the eyes of someone who lives in a world very different from this one.”

▶ Founder of UCSD Literature Department Dies: Carlos Blanco Aguinaga, one of the founders of the UCSD literature department, passed away in La Jolla on Sept. 11, 2013.

Since last year, the number of students who have accepted UCSD’s offer has increased by 22 percent.

The incoming freshmen have an overall GPA of 4.06 and SAT Reasoning scores of 612, 670 and 627 for Critical Reading, Math and Writing, respectively. The transfer students’ GPA was 3.52.

“UCSD continues to attract and enroll the best and the brightest students,” Interim Vice Chancellor of Student Affairs Alan Houston said to ucsdnews.com. “Our ability to do so is testament to UCSD’s prominence as a world-class university that offers students extraordinary opportunities to thrive and succeed.”

He beat thousands of competitors from 120 countries and was awarded a $50,000 scholarship, a ten-day trip to the Galapagos Island and the opportunity to visit the European Organization for Nuclear Research in Switzerland.

Eric began his project a year ago, aiming to develop drugs that can fight influenza in a more effective way.

“The current flu drugs we have are losing their effectiveness. More resistant flu strains are appearing. We urgently need new flu drugs, and that’s what I’m trying to do,” Eric said. “We need our future scientists.”

The events will honor the past, present and future cultures of the Native Americans in San Diego, California and throughout the United States.

Since its conception, the California Native American Day has been held on the fourth Friday of September, but recently, UCSD has expanded the holiday to a yearlong celebration of Native American history and culture.

“We are dedicated to strengthening the relationship between UCSD and local tribal communities and raising awareness on our campus about the legacy and contributions of the Native American community,” Chancellor Pradeep K. Khosla said.