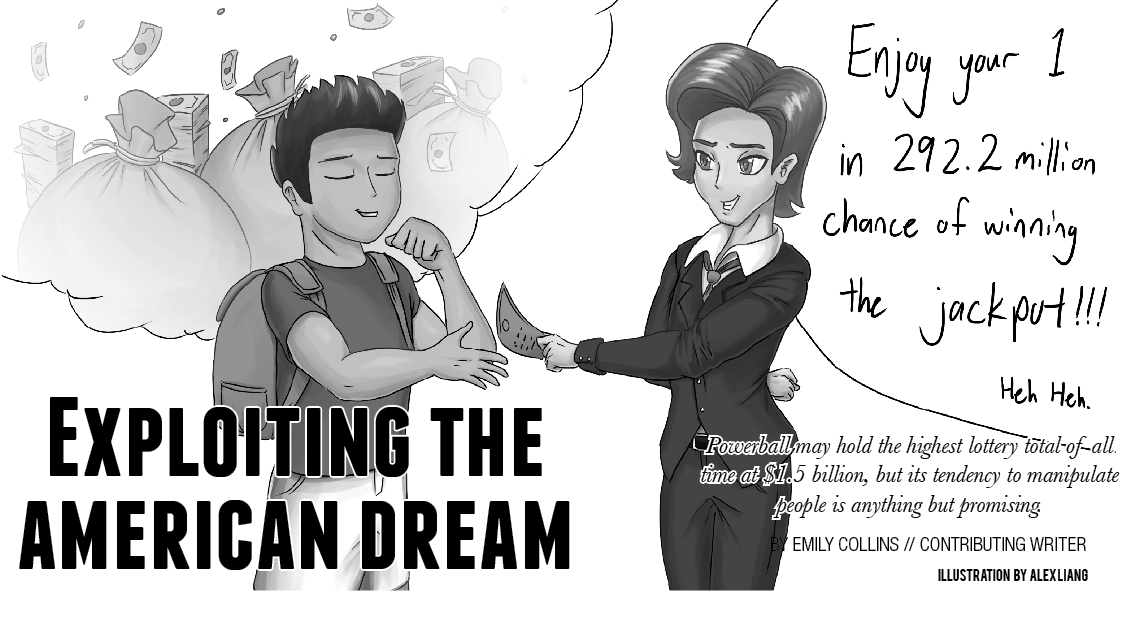 Imagine a quick stop for gas after a long, stressful day. This leads you to make a decision on a whim to buy a lottery ticket, and a few days later that whim wins you $1.5 billion. It sounds almost too good to be true. The Powerball is often depicted as a spectacular way to achieve the American dream, but it also has the potential to manipulate and deceive people. By enhancing images of people’s goals and idealizing their visions of success, the lottery convinces most people that they have a chance at winning, however unlikely. The unrealistic nature of winning the lottery and living a luxurious life thus exploits not only college students, but people from impoverished backgrounds as well.

The Powerball payout currently rests at an astonishing $1.5 billion, the largest jackpot lottery in history. According to The New York Times, the chance of winning the Powerball is currently one in 292.2 million. Nevertheless, advertisements for the Powerball have consistently relied on the concepts surrounding “the American dream,” which superficially involve the possibility of anyone, no matter his or her background, being able to obtain limitless riches, success and luxuries. In doing so, the advertisements depend upon exaggerated and rather unrealistic common dreams in order to guarantee that people will be inclined to purchase tickets, despite a low chance of winning.

By relying on common images of success, the Powerball takes advantage of people who are working toward becoming successful in future careers, such as college students like ourselves. Buying a lottery ticket upon turning age 18 isn’t simply an insignificant rite of passage. According to the Journal of Gambling Studies, there is “a significant increase of young people gambling, particularly in lotteries.” With the current generation’s get-rich-quick attitude, the vision of a future without student debt and with enough money to purchase countless luxuries lures college students into purchasing lottery tickets. In addition to this alarming attitude, The Review of Economics and Statistics published that a high proportion of lottery winners go bankrupt within five years. Combine the likelihood of lottery winners being unable to manage their winnings alongside the typical inexperience that college students have with managing large sums of money, and the result quickly becomes disastrous.

Other than leeching off of college students, the Powerball also relies on individuals from lower socioeconomic backgrounds to gamble in the system at its low-risk cost — $2, to be exact. According to the Journal of Community Psychology, individuals with the fifth lowest socioeconomic status have the “highest rate of lottery gambling” at an overwhelming 61 percent. The Association for Consumer Research also found the typical lottery player to be young, have little education and low family income. It is evident that the lottery encourages people with lower incomes to purchase lottery tickets. Not only does it promote a perception that all people (rich and poor) have an equal chance at winning, but the easy access to and cheap cost of lottery tickets, along with the image of limitless fortune, consistently taunts individuals from lower socioeconomic backgrounds.

Not even allowing prospective winners off the hook, the Powerball is also incredibly misleading. Promises of donating large portions of money to foundations for education have allowed the local and national governments to veil the fact that an expansive percentage of the jackpot is taxed as income. Lottery advertisements often depict the state receiving millions from lotteries, typically going toward education. However, according to The Washington Post, the state actually tends to use this money for the preset education budget, and the money that would have been typically used for education (before receiving extra lottery donations) is used elsewhere. Therefore, the schools do not actually receive extra money and still take hits from state budget cuts. Furthermore, CNBC explained how lottery winners do not receive the full payout they expect from winning. Taking the lump sum from the Powerball would mean receiving $930 million of the $1.5 billion. Adding on federal income tax of 39.6 percent and state tax, which can be nearly 10 percent, the net winnings would be hardly more than $400 million. Although it’s still a hefty payout, it’s a mere 30 percent of the promised $1.5 billion.

Ultimately, whether it wastes its advertisements appealing to college students or people from lower socioeconomic backgrounds, the Powerball remains a pathetic attempt for states to acquire more money from taxes while leeching off the American dream. Not only does it promote the development of future gambling addictions, but it also defines the generic image of success as being only based on money. This image plays off of America’s reliance on capitalism to function. While the Powerball may seem like a promising way to win the perfect life, its use of manipulative and deceptive tactics to lure in the average person does little to obscure the fact that the lottery is simply another gambling scam.