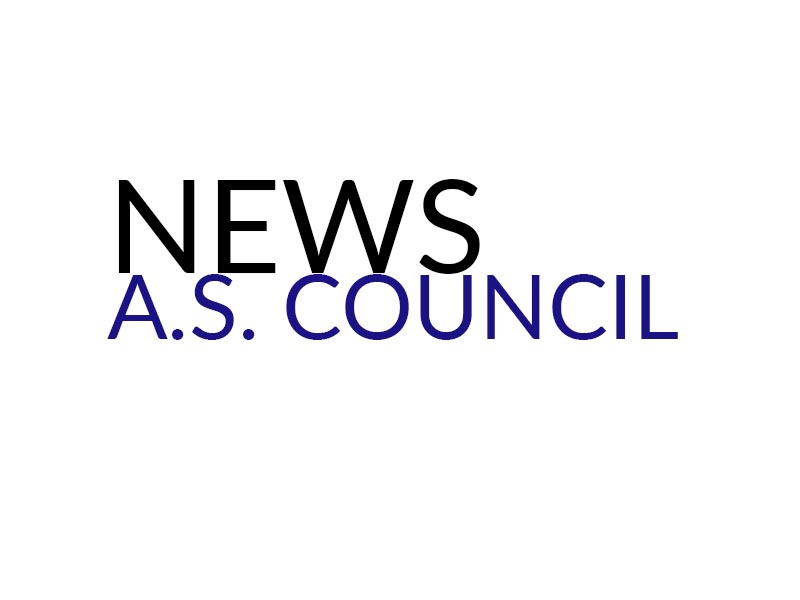 Naftali: There is no subtle way of putting this: A.S. Council defunded the Koala. Actually, A.S Council defunded all publications that receive A.S funding. In the immortal words of Paul Bremmer, “ladies and gentlemen…we got him!” This was the biggest news of the night and I wasn’t even around to hear it. I hate to tell you this, but I had to leave the A.S Council meeting early today because I had a big project to work on. Thankfully, this wasn’t before I got to speak to Senator O’Neill personally and received a complimentary planner from Senator Hosch. While I was busy working, my editor Kriti Sarin was busy paying attention at A.S Council and later, writing this column. Take it away Kriti.

Kriti: We were halfway up the stairs on my way to tonight’s Council meeting when Senator O’Neill sprinted past us, two stairs at a time. As we followed O’Neill into the conference room and watched him immediately grab two slices of pizza, I got a feeling that this week’s meeting would be interesting. And believe it or not, before the meeting even began, O’Neill approached us about a top-secret investigative mission.

Public input began with an introduction from Kiera Galloway, a representative from Congressman Scott Peters’ (CA-52). Galloway mainly works in topics related to the Department of Education and briefly mentioned last week’s Town Hall forum for student entrepreneurship. She also spoke of a new bill that would refinance student loans at 4 percent and another that would allow employers to match employee loans as a tax incentive.

Council then reordered to special presentations, starting with a speech from Vice Chancellor of Student Affairs Juan Gonzalez. Gonzalez first read a statement UCSD administration published online today condemning the satirical campus publication the Koala and then opened the floor up for questions. Senator Kamali began by asking about the continuous increases in enrollment. VCSA Gonzalez responded by referencing UCOP’s recent announcement of the 5,000 student increase in UC-wide enrollment and gave us some fun statistics: a record-breaking 97,000 students applied to UCSD this year and approximately 33,500 applicants were admitted. He added that the university also saw a spike in transfer student enrollment.

Senator Vahdani continued on the topic of enrollment by asking about the decline in admissions of underrepresented minority applicants, specifically Chicano students. According to Gonzalez, students who are accepted to either UC Berkeley or UCLA as well as UCSD choose one of the first two universities 93 percent of the time; therefore, he said it’s difficult to increase enrollment of those minorities.

Associate Vice President of Equity, Diversity and Inclusion Daniel Juarez slightly changed the subject by bringing up the possibility of a pilot program that did not take standardized testing into the admissions process. Apparently, UCLA is testing a program similar to this and Gonzalez said his office was extremely interested to see how it will turn out.

The questions went on for over an hour before Juarez suggested closing the speakers’ list, so I’m just going to summarize interesting things I learned in Gonzalez’s answers now. Housing, Dining and Hospitality is planning to build new undergraduate housing in Fall 2019 and the two-year housing guarantee might not be feasible much longer. As for increased availability of parking on campus, Gonzalez said quite frankly that “we all ought to just pray” until the light rail arrives in a couple of years. Senator Perez later mentioned that free parking at Torrey Pines GliderPort is coming to an end and offered to “glide” with Gonzalez if he ever went paragliding.

The average waiting time to get an appointment at CAPS is between four and five weeks, which Gonzalez deemed unacceptable. Apparently, there will soon be a $16 student fee that will allow CAPS to hire new clinicians and psychiatrists. In regards to mandating campuswide sexual assault training, Gonzalez is an advocate of the idea but his office does not have the authority to make it a reality. The Sun God Festival has not gotten any more funding from the Office of Student Affairs. (What a surprise.) The vice chancellor also claimed that the proportion of black undergraduate students is not 1.7 but 2.2 percent, which isn’t much better.

President Suvonnasupa concluded the Q-and-A by asking questions about administrative support for Black Student Union from community members. Gonzalez encouraged members of BSU to schedule a meeting with him to discuss ways his office can support their cause and explained that the university is focused on diversifying the population of faculty and staff, in addition to students. Gonzalez acknowledged the existence of anti-blackness on campus and expressed hope that it could be eliminated through university-mandated curricula.

Council then reordered back into public input. Dellanira Alcauter from the Office of Diversity, Equity and Inclusion also voiced concerns about the Koala and asked where Council stood on the issue. The conversation shifted when Black Student Union representative Andre Thompson took the stand and urged Council to understand the Black Lives Matter movement and form a collective stance on the issue. Thurgood Marshall College sophomore Charlotte Lu changed the topic of conversation back to the Koala, urging Council to defund the publication on the grounds that student funds should not support a cause that makes community members feel unsafe. Next, Black Resource Center intern Cambria Anderson mentioned the possibility of a reallocation of Sun God funds in the case that the festival is canceled. Another Black Student Union member, Denasia Gaines, asked about plans to improve the freshman experience for students of color.

Naftali: Your usual columnist is back. Looks like Kriti wrote quite a lot. Unfortunately, I am not that detail-oriented. The special presentation came from Guillermo Miguel, Chairman of the University of California Student Association (UCSA) regarding the Student Advocacy Governance and Engagement (SAGE) plan. The plan involves a standardization of the fees that UC students pay into the UCSA and the move to increase representation for all UC students. Additional funds could be used to improve representation in statewide and federal affairs, expand the conference schedule and improve staffing.

If you were one of the over 6,000 students who attended Hullabaloo this year, Director of A.S. Concerts and Events Walker would like to thank you for both the attendance and the huge decline in health and safety incidents. Unless you were the person who drank too much, in which case I hope everything turned out okay. In other reports of members, VP Campus Affairs Valdivia talked about a meeting she had to discuss creation of gender neutral bathrooms and other transgender issues. She also mentioned that CAPS is increasing its staff by hiring two psychologists, a psychiatrist and a caseworker.

The best news of the night, besides the defunding of The Koala, came during question time. Congratulations I-House, you might be getting a hydration station. And perhaps several other locations suggested by Council will as well, including outside of Price Center, Center Hall and many others. HDH had asked Council to come up with potential locations to instal new hydration stations. We will all be looking forward to more news regarding hydration stations. After the Council made their suggestions, I had to leave Kriti at the Council meeting by herself for three hours. Kriti, take us out. Keep it short though, you’re too busy for this.

Kriti: Council then moved into reports of committees, most of which I won’t bore you with. Nobody really objected to anything proposed during Finance Committee, but shit definitely went down in Legislative Committee. Members of Council debated how many senator positions there should be for out-of-state and international students for a while, but what really changed the tone of the night was AVP Juarez’s proposal to delete three sections from the Associated Students constitution, all in relation to A.S. funding campus media publications. They explained that since Council cannot selectively discriminate against one publication (the Koala) without infringing upon First Amendment rights, Council should defund all publications currently receiving money from student fees.

Several members of Council objected to this motion since it would affect publications that benefit students as well, but ultimately voted in favor of eliminating the three sections from the constitution (with a 22-3-0 roll call vote). VP External Fabella urged Council to think of ways to legally ban the Koala from publishing inexcusably offensive content and gave an example of an issue in which the publication listed places on campus where it would be acceptable to rape someone. All councilmembers agreed to try to assist other organizations in finding alternate sources of funding and then continued to discuss less intense changes to the Constitution. Wait, what? President Suvonnasupa just proposed a straw poll to ask if his pants were appropriate for the weather. So many polls. So many speakers on the speakers’ list. I honestly don’t know what’s happening at this point so I’m just going to leave…especially since I have an eight-page paper due in about 12 hours.

An earlier version of this article incorrectly referred to Christian Walker as a campuswide senator instead of an Associate Vice President.