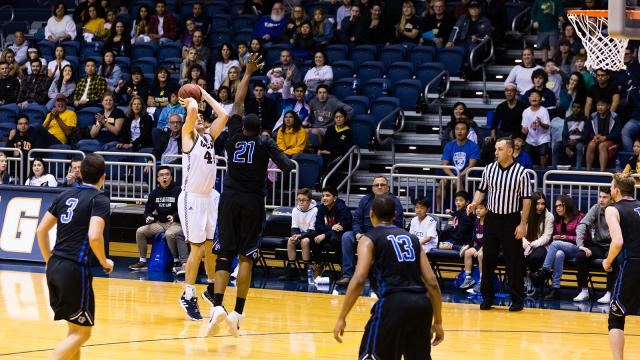 In what would prove a decisive victory, the UC San Diego Tritons crushed the California State University, San Marcos Cougars in a 92–69 win over their neighbors to the north. Perhaps more notable than the final score, however, was redshirt junior center Chris Hansen’s performance, whose five 3-pointers and 19 overall points helped him eclipse the 1,000-point milestone for his career at UCSD. The game directly followed an overtime thriller in which the UCSD women’s basketball team took down San Marcos 68–67 in overtime, with junior forward Mikayla Williams reaching the 1,000-point mark as well.

All of the Tritons’ usual 3-point shooters continued to stay hot from behind the arc in what would become a barrage that the Cougars simply could not stop. The team knocked down 19 3-pointers on the night, shooting 47.5 percent from deep; redshirt freshman guard Tyrell Roberts, sophomore guard Gabe Hadley, and Hansen led the way as they went 4–10, 4–5, and 5–5 respectively. The home crowd was loud and remained in the game for almost the entirety of the first half. The cheering grew louder every time a Triton hit a 3-pointer as giveaway “Tees for Threes” flew through the air into the hands of eager fans.

Early on, CSUSM kept things close, forcing the Tritons to hit their shots under heavy defensive pressure, a difficulty that waned over the course of the game. The Cougars were led on both ends of the floor by freshman guard Bryce Sloan (18 points, 3 assists, 1 steal) and junior forward Darae Elliott (17 points, 3 blocks).

But even with the strong defense of Sloan and Elliott, the Tritons flashed their 3-point prowess early on, with the first points of the game coming on junior forward Scott Everman’s contested 3-pointer from the corner. Everman, along with redshirt sophomore guard Mikey Howell, went to San Marcos High School, making the game even more personal for the pair.

The closest the Cougars got to controlling the game was in the first few minutes of the first half, going up 10–9. But the Tritons would have none of it, as senior guard Christian Bayne hit a big 3-pointer to get the crowd back into the game and to get the T-shirts flying. And once the 3-pointers started coming, the Cougars had a tough time staying in the game. The Tritons made three 3-pointers in the span of just a few minutes to push the lead up to 18–10.

And the 3-pointers didn’t stop coming. After a turnover that led to a basket for the Cougars, Hadley hit a 3-pointer to raise the score up to 23–14 to begin a run for UCSD. A few minutes later, a 3-pointer by Everman was quickly followed by back-to-back 3-pointers from Hansen, prompting a Cougar timeout and an outburst from the Triton crowd.

CSUSM couldn’t catch a break, as coming out of the timeout Roberts hit a 3-pointer to push the score up to 40–22. The run was made possible largely due to the interior presence of Hansen, whose ability to make shots inside and out kept the Cougars’ defense from running the Tritons off the line. The domination of the first half was fittingly capped off with a Roberts floater as time expired, pushing the score up to 46–28, a margin the Tritons would continue to increase even once the reserves came onto the floor. In the second half, the crowd quieted down as the lead grew, especially once the gameday staff ran out of t-shirts to give away after 3-pointers.

The strongest performance off the bench in the second half came from backup redshirt junior guard Connor Peterson, who finished up with 11 points on 4-4 shooting from the field. Peterson was able to get inside and, when he wasn’t dunking or laying it in, consistently found a way to draw fouls. Sophomore forward Martin Tombe also had a strong showing off the bench late in the game, hitting a heavily contested 3-pointer despite a foul and converting the 4-point play much to the delight of the bench, even if the crowd was already quieting down at that point in the game.

With the victory, the Tritons move to 15–3 overall and to 10–1 in the California Collegiate Athletic Association, staving off California State University, East Bay for the top spot in the CCAA. Both teams have 10 conference wins and three-game winning streaks. The two teams have a long way to go before the season’s end, but they may now be beginning to eye their head-to-head matchup on March 2, a game that could decide the CCAA, as it will conclude the regular season.