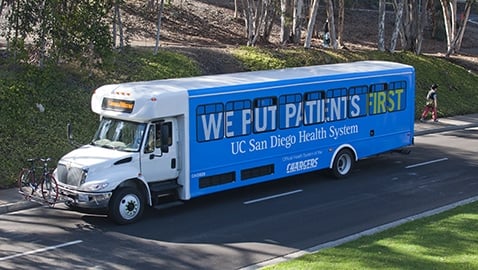 UC San Diego Transportation Services has made several changes to the campus shuttle routes that were effective as of Jan. 8, 2018. These include two replacement routes — North Campus and Western Campus Connector — for Campus Loop and Regents and adjustments to the North Mesa route, now renamed as Mesa Nueva. There is also an updated schedule for Hillcrest/Medical Center shuttles.

The Mesa Nueva route, symbolized by a purple “M” symbol, now transports commuters from Mesa Housing to Rupertus Lane through Regents and Voigt Drive instead of La Jolla Village Drive. It also stops by the Regents Parking Lots (P703/704).

According to a UCSD Shuttles Facebook post on Jan. 3, these changes were a response to “the anticipation of on-campus construction, parking, and issues regarding accessibility” to shuttles. The Mesa Nueva route, in particular, has been rerouted off La Jolla Village Drive to “augment service from Regents Parking Lots.”

Raymond Wampler, the day supervisor at UCSD shuttles, spoke to the UCSD Guardian about the recent changes, stating that “cut[ting] the Campus Loop in half” into the two new shuttle routes helps accommodate intra-campus commuting that “align[s] with future construction projects on campus.” Construction of the North Torrey Pines Living and Learning Neighborhood, for example, will affect the area between Muir and Marshall Colleges and has an expected completion date of Fall 2020.

He further explained that the new routes will be “financially and environmentally efficient” for their shuttle operations and will not compromise any pre-existing commuter benefits from the original Campus Loop.

“Our ultimate goal is to serve the most people with the most resources,” he said.

He also addressed the role of sustainability in the new Mesa Nueva route, emphasizing that UCSD commuter traffic can be “good neighbors to outlying layers” with shuttles running on a more “internal basis” because it minimizes not only public road congestion but also greenhouse gas emissions.

In late 2017, the San Diego Association of Governments again rewarded UCSD with a Diamond Award to celebrate continued campus support of environmentally-sustainable transportation methods such as campus shuttles, public transit, and cycling.

These new routes are operational on weekdays of academic quarters, and their maps are available on the Shuttle Tracking website and the UCSD Shuttles Facebook page.