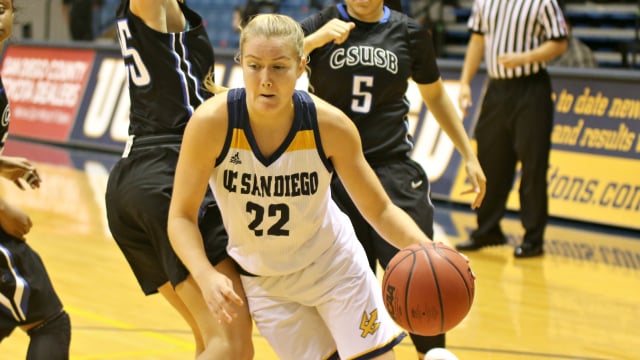 The UC San Diego women’s basketball team began its regular season last Friday, facing off against Simon Fraser University at Riverside, CA. After having their NCAA title hopes were dashed by the Clan last season, the Triton came into their season opener with a vengeance, soundly defeating them 69–52.

Through the first half, the game remained close. UCSD struggled to generate points from behind the arc, with a game-low 0 percent from the three-point line. Despite this, the Tritons were highly accurate inside the arc, making 54.8 percent of their shots. Sophomore forward Mikalya Williams hit three consecutive layups to give UCSD its largest lead of the half (24–17). However, SFU was able to respond, cutting UCSD’s lead to four going into halftime (36–32).

After halftime, the Tritons came out energized and determined, extending their lead from four to nine points by the end of the third quarter. Another layup by Williams, followed up by two buckets by senior Dalayna Sampton galvanized the UCSD offense. Senior Paige Song hit UCSD’s first three-pointer of the game to extend the Triton lead to 49–40.

UCSD carried the momentum from its third quarter success to close out the game strong. The Triton’s were able to capitalize off many SFU fouls, exhibiting an excellent 84.6 percent at the free throw line. The defense limited the Clan to eight points while the offense continued to produce, dominantly ending the game 69–52.

The Tritons’ efficiency in the paint (40 points) fueled their offense to victory. Their success close to the net was able to cover up a disappointing 2–14 from behind the three-point line. Williams, in her first year with UCSD, made a fantastic regular-season debut: 12 rebounds, two blocks, and a game-high 22 points.

Coming off the victory over SFU, UCSD delivered another dominant performance in their Saturday game against California Baptist, defeating them 78–64.

Much like Friday’s game, the score remained close in the beginning. Steals and scores on fastbreaks by Song and Williams early in the first quarter seemed to point momentum in favor of the Tritons, but the Lancers were able to profit from Triton mistakes and turnovers. CBU scored in the final seconds of the quarter, leading 17–21.

UCSD came into the second quarter with a new energy. A three-pointer by Song gave the Tritons a 28–36 lead and they never looked back. The UCSD offense went on a tear, scoring 26 points, while the defense held CBU to just 14 points. The Tritons closed the first half confidently ahead 43–35.

With a comfortable lead coming into the second half, the Tritons cruised to victory, winning 78–64.

UCSD continued to be successful in the paint (34 points) and its shooting form outside began to improve. Williams, once again, lead the team in scoring with 17 points. Senior Taylor Tanita and junior Kayla Sato also played superb team basketball, combining for 15 assists.

Next week, UCSD looks to extend its two-game win streak, heading to Azusa for the SoCal/GNAC Classic for another weekend of basketball. They will be playing against Western Washington and Seattle Pacific.