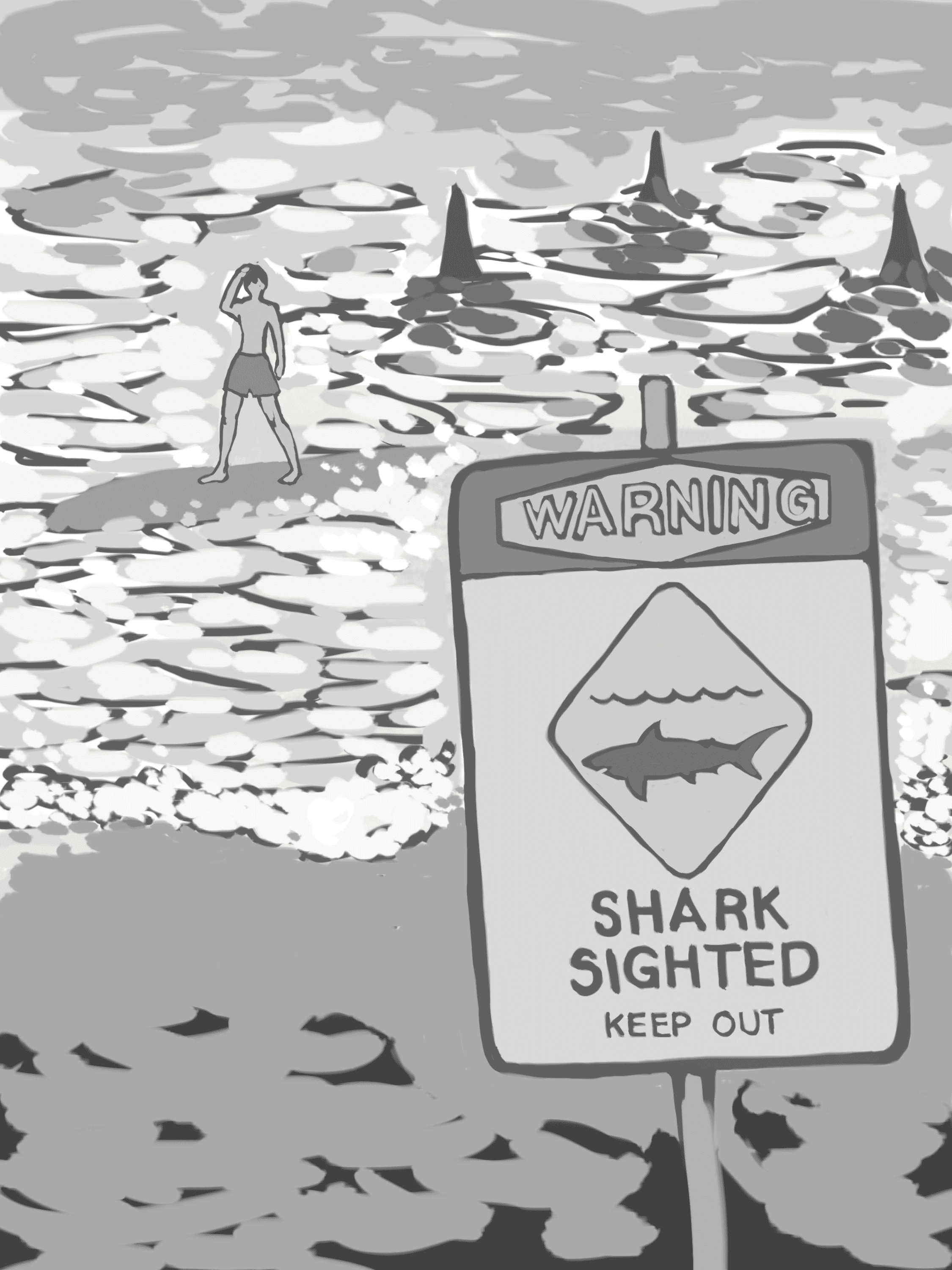 As I paddled out at the popular and, as expected, crowded surf break of Lowers in San Clemente, California, I couldn’t help but feel uneasy at every splash of water or shadow passing near me. After a week of countless shark sightings and a number of shark attacks along California’s coasts — including a great white shark breaching at Lowers a week ago — sharks seemed to be on everyone’s mind. But, as I noticed the calm atmosphere of the surfers around me, I wasn’t surprised to see that the sightings weren’t deterring too many people from their favorite ocean pastime.

According to reports, nine eight-to-10 foot sharks had been spotted in Dana Point, one 11-foot shark in San Clemente at the pier and three more reported with aggressive behavior at surf spots in Trestles in San Clemente. And, on top of all the sightings, Leeanne Ericson, a mother of three, was attacked on April 29 off of San Onofre State Beach, causing serious injury to her leg and leading to temporary beach closures in the area. Yet many surfers and swimmers have refused to abide by these closures, bringing to question the effectiveness of these mandates and whether or not city officials and lifeguards have the right to decide if people can be allowed to enter the ocean at their own free will.

Although shark sightings are common in this area of California, the amount of activity as of late has certainly been more than usual. After the attack on Ericson, California State Lifeguards responded by issuing beach closures from Trail 6 at San Onofre all the way through San Clemente’s public beaches. Lifeguards and officials from helicopters actively called people out of the water, and they also had the power to issue citations to those who did not exit city beaches. Nevertheless, the surf spots have remained crowded and the closures have done little to ward off ocean-goers.

San Clemente lifeguard chief Bill Humphreys has stated the importance of these closures in protecting people from the risks of shark attacks. “The seriousness has escalated. And we do have the manpower to enforce,” he said. “It’s a real slippery slope if you allow people to go in the water when it’s closed … we have a variety of people to look out for.”

And while closures may protect innocent, unknowing families from potential shark encounters, they become a mere hindrance to surfers and other common beachgoers who know the risks of sharks every time they paddle out into the wild that is the ocean. In 2015, when San Clemente and the surf spots in Trestles had a large number of shark sightings, city officials again closed the beaches and cleared the waters. In 2016, Sunset Beach in Huntington was closed on and off due to sightings, as the beach is closed anytime a shark over ten feet is spotted. Yet in all of these instances, the closures and reopenings acted more as a warning than an actual form of protection against people who refuse to abide by the reports and signs.

Closures may very well help protect people in the sense that they serve as a warning and may give sharks more time to migrate away from the beaches. But if the sharks are congregating rather than migrating — due either to fish, seal assemblages or higher water temperatures near the beaches — then waiting to enter the water because of a closure will do little in the long term to protect people from these animals.

Certainly, lifeguards and city officials should continue monitoring waters and warning people if there is a high shark presence or a large number of shark sightings in the area. It should be up to those who are informed and in the water, however, to decide whether or not they should return to land. Forcing people to exit the water or fining those who refuse to do so will never succeed in fully preventing people from entering sharky oceans. The recent incident has shown this much. The ocean is ultimately the wilderness, and no beach closure will stop sharks from existing in their natural territory.