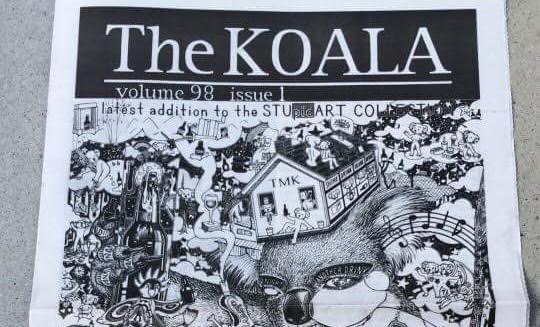 Federal Judge Jeffrey Miller dismissed a lawsuit filed by satirical student newspaper The Koala against Chancellor Pradeep Khosla, A.S. Council President Daniel Juarez and A.S. Council Financial Controller Justin Pennish last week. The lawsuit, filed in June 2016 and carried out by the American Civil Liberties Union on behalf of The Koala, claimed that A.S. Council’s decision to defund printed media on campus violated the First Amendment and singled out The Koala because of its viewpoint.

Miller dismissed the lawsuit, which sought compensation for the time when The Koala didn’t receive funding and to restore funding for print publications, on the grounds that the 11th Amendment protects states from being sued by private individuals in federal court.

As for claims of First Amendment violations, Miller said the government may restrict speech in a limited public forum as long as the restrictions are reasonable and not based on viewpoint.

“Here, there is no doubt that the elimination of funding for all print publications is viewpoint neutral,” Miller wrote.

A.S. Council’s decision to defund printed media came after The Koala released a Nov. 2015 story mocking “safe spaces” on campus, where the author used the “n” word five times and stereotyped Asians, who make up 46 percent of the student body at UC San Diego, according to a 2016 enrollment report.

In response to the article, campus administrators released a public denouncement of The Koala, calling the publication “profoundly repugnant, repulsive, attacking and cruel.” Hours later, A.S. Council made the decision to defund printed media on campus, with then A.S. President Dominick Suvonnasuna telling the UCSD Guardian that administrators’ denouncement of The Koala played no part in the vote.

Later that month, The Koala created a GoFundMe page that was shared on its Facebook page with the caption:

“We’re getting another issue out in the next couple of weeks, but we need your help! Support The Motherfucking Koala, and help us send a big middle finger to the UCSD Administration and A.S. [Council].”

The university said in a recent statement that UCSD is “pleased that the federal district court has dismissed all of The Koala’s claims.”

“The court found that the [A.S. Council] did not violate the First Amendment or any other student rights,” the statement reads. “We believe that this is the right decision and hope that the court’s decision brings this case to a close.”

David Loy, Legal Director of the ACLU Foundation of San Diego and Imperial Counties and one of the attorneys representing The Koala in court, told the Guardian that they “strongly disagree” with Miller’s decision to dismiss the complaint without leave to amend.

“This case presents fundamental issues for freedom of speech and press at public universities, and we are considering an appeal to the U.S. Court of Appeals for the Ninth Circuit.”

The Koala’s latest issue was passed out on Library Walk during the week of Feb. 20 and contained an article criticizing liberals’ purported desire to outdo each other when it comes to political correctness. Specifically, the publication mocked an op-ed written by Chair of the Black Student Union Refilwe Gqajela that calls for the Lumumba-Zapata Collective, a group of university activists, to change its name because of historical implications. The article also mocked the author’s name.