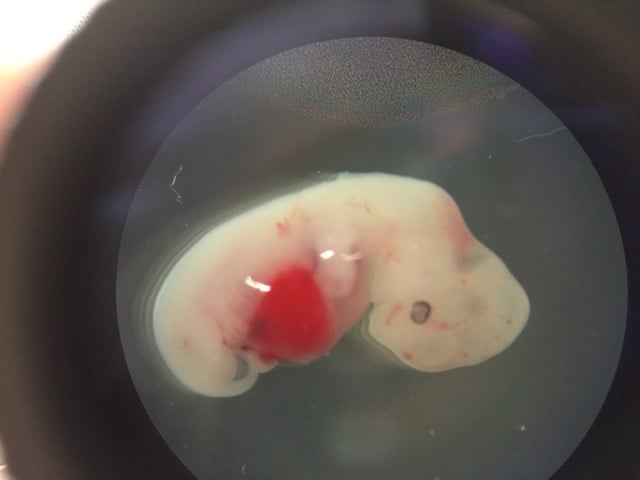 Researchers at the Salk Institute of Biological Sciences published a new study reporting their integration of human stem cells into developing pig embryos in the scientific journal, “Cell,” on Jan. 26. The results could lead to solutions addressing the 22 people who die every day waiting for an organ transplant, a statistic from the U.S. Department of Health and Human Services.

To create the human-pig hybrid embryos called “chimeras,” scientists used CRISPR/Cas9 gene editing to delete the DNA sequence of a pig embryo that codes for the creation of a specific organ. The enzyme, Cas9, acts as a pair of molecular scissors that can cut the two strands of DNA at specific locations, allowing scientists to insert the desired sequence. In this study, human stem cells were injected, creating the chimera and replacing the missing DNA to theoretically grow a human organ for patient transplantation.

“This is a dream, really, and it may take years to achieve this goal,” Wu told the UCSD Guardian. “Many challenges [lie] ahead, including technological, scientific, ethical and societal.”

“I need to emphasize that our goal is definitely not to create any ‘fearful’ creatures that the public may have imagined,” Wu told the Guardian. “We stop the pig development before four weeks, which roughly corresponds to eight to 10 weeks in humans, and during this time we can study how the human cells interact with the pig host and how to avoid human cells [contributing] to the central nervous system and the germline, which are the main source of ethical concerns.”

“I think both killing for meat and killing for harvesting organs are similar because they both entail sacrificing the pig and using its body parts for human consumption,” Ambulkar told the Guardian. “[But] the final goals of growing human-pig embryos and using these organisms for harvesting organs may deal with very similar ethical concerns to abortion and even slavery.”

To fund this study, Salk researchers who collaborated with Spain and UC Davis relied on donations from private foundations. The National Institutes of Health awarded a pioneer grant but does not allow the team to work on human stem cells.

The team chose to use pig surrogates because the size of their organs and their physiology are similar to humans. In fact, other labs around the world are working to develop methods for directly transplanting pig organs into humans, a field of study called xenotransplantation. Additionally, 30 to 50 embryos can be transferred into a single surrogate sow, which helps the researchers test for different parameters, according to Wu. The disadvantages are that pigs have a gestation period about half the time of humans, which entails significantly different speeds of development, and pigs and humans are notably separated on an evolutionary scale.

While chimeric embryos were successfully implanted and human cells in some embryos turned into the early stages of human organ tissue, previous experiments growing rat organs in mice were more promising, according to KPBS. Those mice lived normal lifespans with rat organs such as the pancreas, heart and eyes, setting a precedent for future research to be used in healthcare.

“Our next steps include applying the CRISPR/Cas9 mediated interspecies blastocyst complementation system that is developed in rat and mouse to human and pig,” Wu said. “Realistically speaking, there are several applications that are possible in the next few years, which include in vivo disease modeling, in vivo drug testing [and] an in vivo platform to study human development and evolution.”