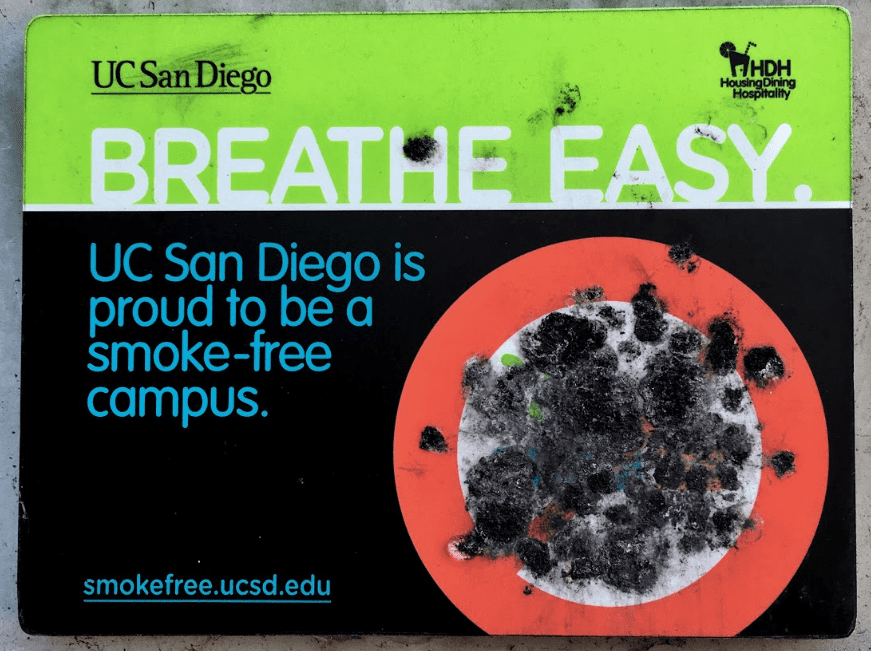 At many universities, including the UC system, smoking on campus has remained strictly prohibited. Although not everyone may feel satisfied with this decision, a much larger portion of students and staff agree to the effectiveness of these terms. This is mainly due to the fact that smoking not only affects the individual, but those nearby them as well. Inhaling clouds of smoke while trying to study or eat may seem overwhelming to non smokers, not to mention the increased risks associated with secondhand smoking such as lung cancer, asthma, respiratory infections, and other respiratory diseases. Alongside these long-term problems come the side effects of addiction, which cause individuals unnecessary stress when they cannot obtain the product. Having to constantly feed this addiction eventually also impacts one’s wallet, considering that the average pack of cigarettes costs about $5.50, equating to over $2000 annually if a single pack is smoked a day.

Aside from the numerous health concerns, smoking also makes a large contribution to air pollution and waste. Cigarette butts may seem small and insignificant, but they are actually the most common form of litter found on beach shores. Yet the problem does not stop there—cigarette butts continually release toxic chemicals which harm living organisms. Thus permitting such actions on university campuses would be exposing ourselves to long-term effects without even recognizing it.

While many argue that instilling strict regulations is futile, evidence has shown a decrease in student smokers at universities that banned smoking. According to USA Today, students surveyed at these universities noticed dramatic  improvements within a year after prohibition. Though it may not make a difference overnight, it has the potential of reducing the number of regular student smokers over time. Rather than charging fines on students caught, colleges should opt to provide programs for students struggling with addiction since it makes them feel less judged for their decisions while also helping them transition to a smoke-free life. The prevention of on-campus smoking is far better than ignoring an issue that could result in a hazardous campus. Colleges that have not yet implemented or enforced these regulations should do so for the wellbeing of everyone.

Since 2013, UC San Diego has been advertised as a tobacco-free institution, but the quiet huddles of smokers who gather in the eucalyptus forest clearing and on the terrace behind Geisel prove otherwise. Although these sites are located far enough away from major thoroughfares that secondhand smoke is not a threat to the general student body, they do present the university with an environmental and ethical hazard.

Proponents of smoking bans often cite a 2001 study in the American Journal of Preventive Medicine that found such measures reduce the number of students who start smoking in college by as much as 40 percent but fail to report the study’s other finding that bans have no effect on those who are already smokers. UCSD’s ban forces habitual users to either wander to a secluded spot or the edge of campus to get their fix, spots at which mounds of cigarette butts rapidly proliferate. Cigarette butts last for up to 10 years, so even once smokers graduate and move on from UCSD, their legacy remains. Furthermore, by pushing smokers to these sequestered corners, a substantial opportunity to treat their addiction, or at the very least expose them to treatment options, is lost.

Along Torrey Pines Road, just beyond the UCSD Extension, lies one such area. Though not officially sanctioned by the school, someone has taken the time to set up buckets for the safe disposal of cigarette butts and populate a kiosk with anti-smoking literature. Instead of ignoring on-campus smokers, UCSD would be well advised to institute these practices at other known smoking locations. Doing so would give smokers the opportunity to keep their campus clean and give healthcare providers the chance to get more smokers to quit. Smoking is an individual’s choice, and creating spaces for tobacco’s responsible use and possible treatment would better bridge the differences between one’s right to one’s own body and the university’s obligations to educate its students on personal health matters and to provide a clean, safe environment for all.