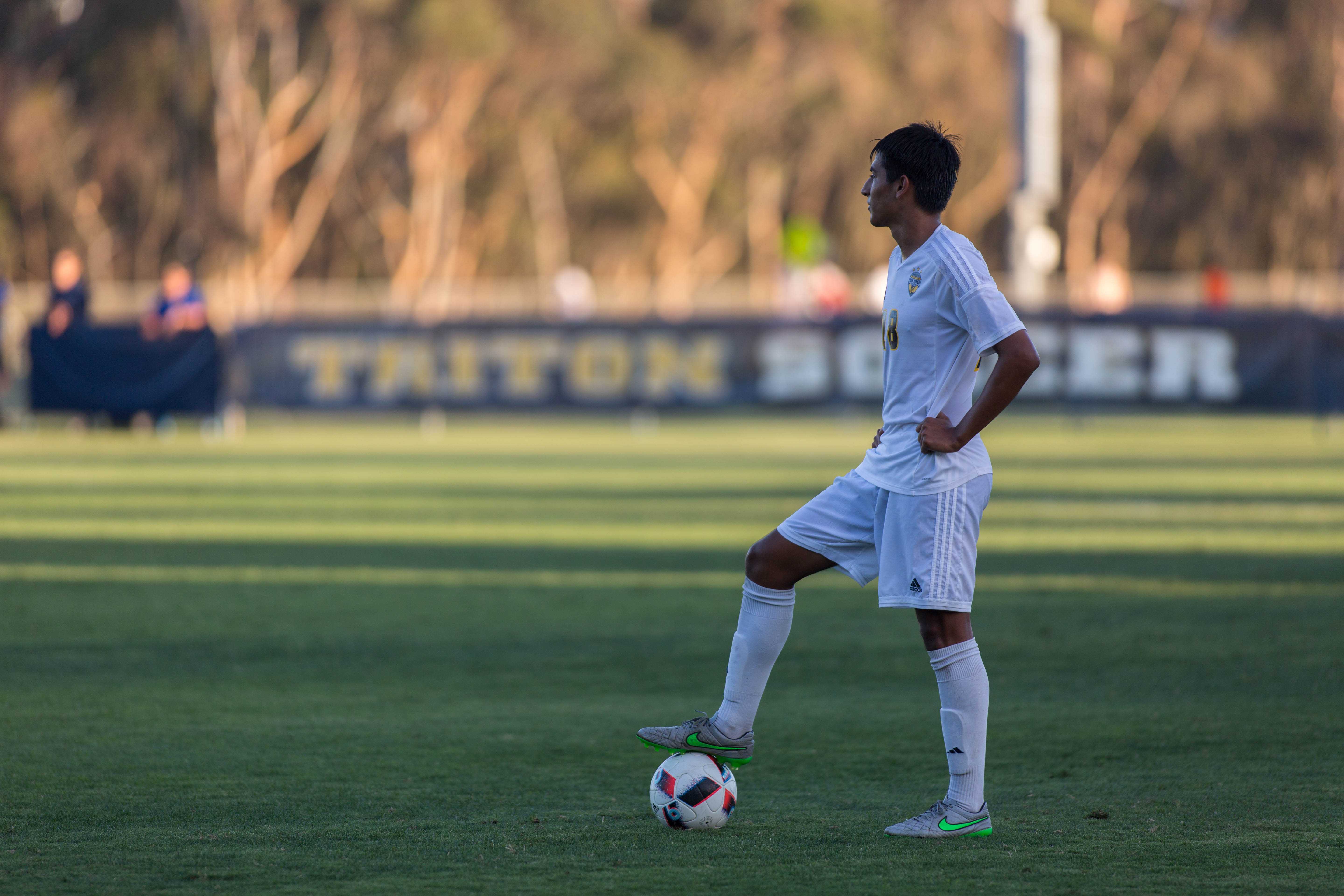 What a weekend it turned out to be for the UCSD men’s soccer team, as it won its first-ever California Collegiate Athletic Association championship — but, of course, not without some drama. Going into the last two matches of the regular season, the Tritons did not have much room for error if they wanted to clinch the conference title. Thursday, UCSD blew a 1–0 second-half lead versus Cal State San Bernardino and lost 1–3. The result leveled the team in the standings with preseason favorite Cal Poly Pomona, which the Tritons would play on Saturday. The winner of that game would clinch the title. UCSD dug deep in the last five minutes that remained, down 1–0 against Cal Poly Pomona, and grabbed two late goals to stun the Broncos 1–2 and win the title.

At Cal State San Bernardino, the Tritons came into the match rolling on an eight-game win streak, and extending the streak to nine looked probable. However, their 1–0 lead turned into a 1–3 second-half deficit for the Tritons in the span of eight minutes. Consequently, the streak halted and gave UCSD its second loss of the season. For Cal State San Bernardino, the crucial win kept the team’s playoff hopes alive.

Perhaps not the most entertaining match in the first half, the first shot of the game took nearly 24 minutes. However, the 0–0 match at halftime would not let down in the second half as a fury of goals made for an outstanding finish.

Redshirt junior forward Malek Bashti put the Tritons on the board, scoring his third goal of the season in the 55th minute after senior forward Sam Palano assisted the play for an easy finish into the right corner of the net.  All looked to be comfortable up to that point, but then a penalty decision shifted the momentum to the home side.

Cal State San Bernardino converted the spot kick and leveled the match at one apiece in the 75th minute. Seven minutes later, the Coyotes gained the lead through a deflected pass that ended past the keeper. A mere 23 seconds had passed when Cal State San Bernardino put the game to bed with a third goal to earn a 3–1 victory to upset the Tritons.

With the loss, UCSD found itself in a must-win scenario against Cal Poly Pomona in Saturday’s match to claim the conference title. A loss would drop the Tritons to third in the conference. The ultimate road test was upon the Tritons.

UCSD and Cal Poly Pomona entered the match with an identical 8–2–1 conference record, meaning the winner of this match determined the CCAA conference champion. The drama-filled match would be historic at the end as the Tritons fought themselves back from a 1–0 deficit with 15 minutes remaining in the match to seal their first-ever conference title in their 17-year history in the CCAA.

There were plenty of shots in the first half; however, neither team could break the deadlock with their efforts on goal. UCSD held an 8–5 shot advantage in the half, including four shots on target.

The Broncos put themselves on the board first in the 75th minute as they were gifted a penalty decision, due to a supposed handball on the Tritons off a cross. Junior forward Luis Najera Jr. stepped up for Pomona and calmly put the ball in the left corner for a crucial 1–0 lead.

At this point, anyone watching knew it would be an uphill battle for the Tritons to send the match to extra time, let alone win.

Yet, the drama continued in the 85th minute when senior midfielder Justice Duerksen took on a defender toward the left side of the 18-yard box and, consequently, was brought down. Just as he did 10 minutes prior, the referee pointed to the spot. With all the pressure on Duerksen’s shoulders, he stepped up to take the penalty. He shot to his right, but Pomona junior goalkeeper Jason Trejos, read the shot and saved the goal, though the ball bounced nicely to the middle where Duerksen assured a 1–1 score.

Five minutes remained, but surely the Tritons would not be able to snatch the title in the dying minutes of the match. Or would they?

As if it was written in the stars, in the 89th minute the Tritons earned a corner, and Duerksen sent the ball into the six-yard box. Trejos came off his line to punch the ball out; however, the ball fell to sophomore midfielder Christian Cordell who incredibly gave UCSD a 2–1 lead with his fifth goal of the season.

Even then, the drama did not end. Pomona found the back of the net off a rebound, but the goal did not stand as the linesman ruled the goal effort offside. It was the Broncos’ last effort to send the match to extra time.

Meanwhile, Cordell and the rest of the Tritons celebrated the final whistle in an incredible match. Most importantly, they celebrated the first CCAA conference championship in the history of the school.

UCSD’s season does not end here, however. With the win, the team earned the number-one seed in the CCAA conference tournament this upcoming week, meaning a first-round bye and automatic bid in the semifinals. The Tritons will face the winner of the Cal State San Bernardino and Chico State matchup on Friday, Nov. 4 at 1:30 p.m. Semifinal and championship matches are all played at Warrior Stadium in Turlock, CA.