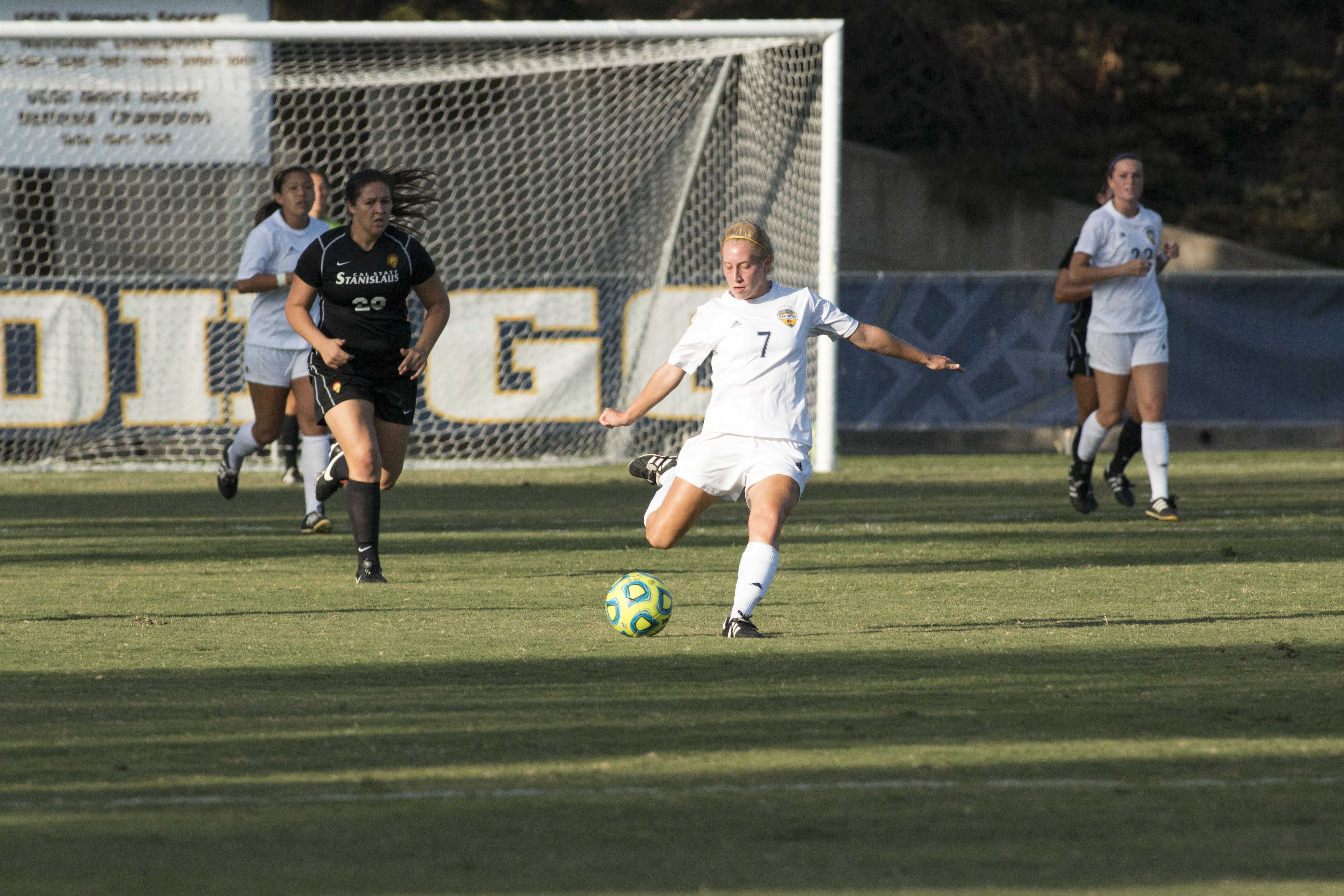 After kicking off the season with a 3–1 record, the UCSD women’s soccer team  managed to move up to No. 6 in the nation while remaining No. 1 in the West Region.

The Tritons continued their 2016 campaign this past week by traveling north to No. 17 Western Washington University and the undefeated Central Washington University. Wednesday’s game against the 17th-ranked Vikings led to an upset as UCSD lost 3–2. However, the Tritons were able to bounce back Friday and hand CWU its first loss of the season.

The return to Harrington Field was an emotional one for UCSD. The Tritons last played there during the first round of the 2015 NCAA Division II Championship, where they ended the season with a loss to Seattle Pacific.

UCSD’s loss to the Vikings was in similar fashion to its last visit. Like in the championship, the Tritons trailed going into the half with a two-score deficit. Again, their late rally was not enough as the opposing team managed to stay one score ahead to seal the win.

Vikings sophomore forward Gabriela Pelogi scored the first goal in the 23rd minute of play. She managed to pass two Tritons and kick a well-placed ball to the far post, beating senior goalkeeper Itzel Gonzalez. Within the next seven minutes, senior defender Erin Russell complemented her teammate with a 20-yard blast, making the score 2–0.

UCSD was quick to respond with sophomore forward Mary Reilly hitting a perfect floater past several WWU defenders. Junior midfielder Jordyn McNutt was able to seal the play with a shot to the far post, making it 2–1 with her first goal of the season.

By the end of the first period, the Vikings were able to take back a two-goal lead over the Tritons after a couple one-touch passes and a shot by freshman forward Jordyn Bartelson.

UCSD scored the lone goal in the second period around the 58th minute. Following a failed clearance, Reilly lobbed the ball over junior goalkeeper Ashley Homer to make it a one-score differential.

The Tritons suffered a 3–2 loss, though they managed to score two goals on a team that had, thus far, not been scored on. Homer’s shutout streak came to an end 413:55 into the season. UCSD was heavily outplayed during the first period; WWU had twelve shots compared to the Tritons’ four. However, WWU was held in check after UCSD freshman midfielder Natalie Saddic subbed in at the 33rd minute.

Friday’s game was UCSD’s first overtime win and CWU’s first loss of the 2016 season. The match exhibited stellar defense from Gonzalez, who made a crucial save in overtime and junior midfielder Taylor Ramos, who went down to save a goal.

For the third game in a row, the Tritons let the opposing team score first. This time, it came within the first six minutes of the match. The Wellingtons jumped to the lead after senior midfielder Keilin Farrand’s corner kick. Although the athletes continued to play after the kick, it was later ruled by the assistant referee that the ball had crossed the line.

The Tritons scored and tied the game up several minutes before the half after CWU freshman goalkeeper Emily Holt fouled UCSD freshman forward Roni Merrill. Senior center defender and co-captain Meghan Berry took the reins and drilled the penalty kick for the tie, making it a 1–1 match.

Still tied 1–1 at the end of the second half, the match went into overtime. Gonzalez saved a CWU shot from the right diagonal inside the box by junior midfielder Mackenzie Nolte.

Seconds after blocking the ball, UCSD countered and brought the ball to the right flank into Wellington territory. Junior winger Jordyn McNutt delivered a cross to junior forward Katie O’Laughlin, who headed it in for her league-leading sixth goal and a Triton victory.

UCSD heavily outshot CWU 22–6 for the entire match, which led to Holt’s record eight saves. The victory was also UCSD’s seventh win against CWU in the all-time series. The Tritons improved to a 4–2 record and will look to play Cal State San Marcos on Wednesday at 12:30 p.m. to begin their California Collegiate Athletic Association schedule.