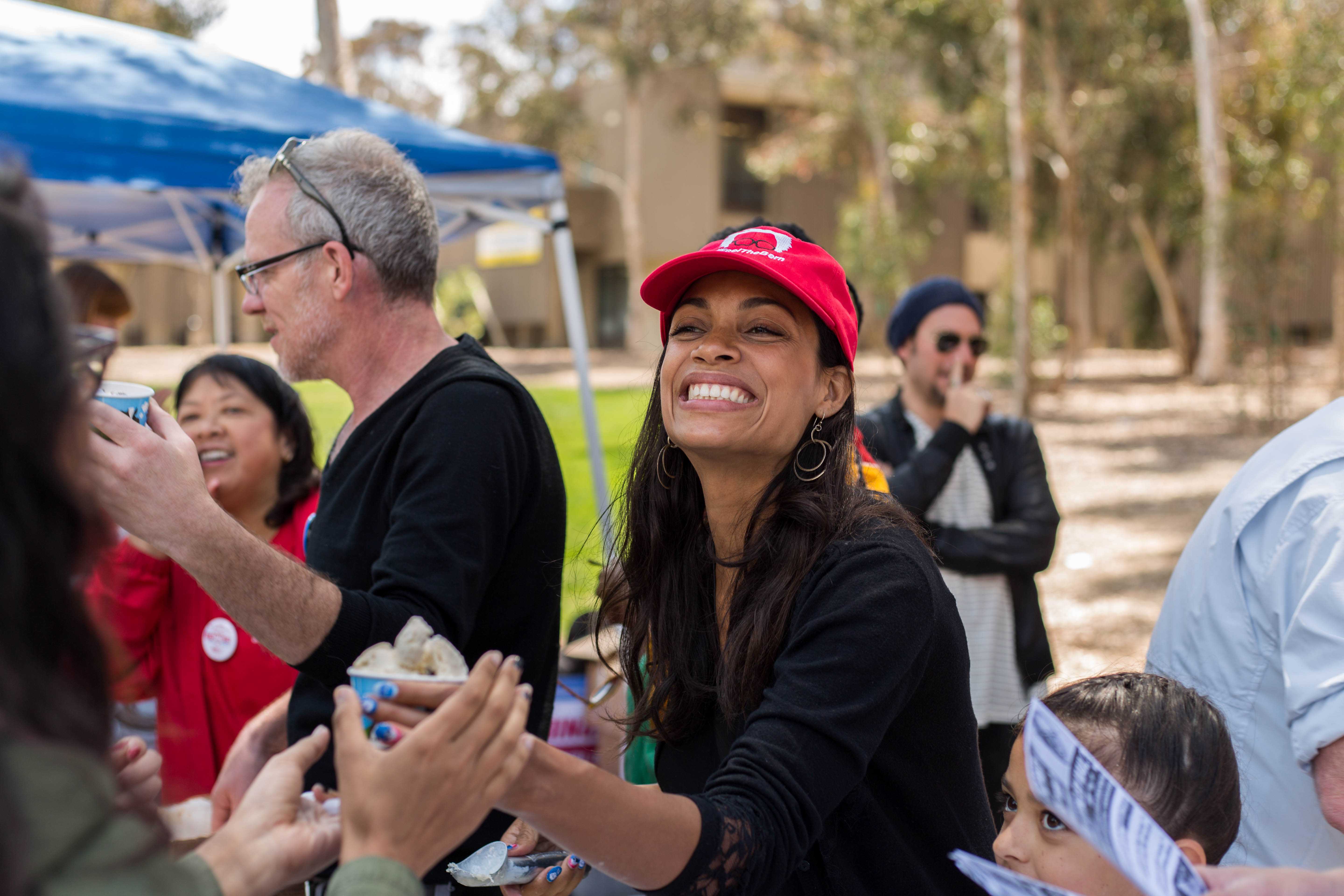 Both Cohen and Dawson have advocated for the Bernie Sanders campaign over the past several months. Cohen and Ben & Jerry’s co-founder Jerry Greenfield have been treating people to free ice cream across the country to rally support for the campaign.

With the California primary approaching on June 7, Cohen described the significant role UCSD students can play in electing Sanders as the Democratic Party’s presidential nomination.

“California is the big state that comes last,” Cohen told the UCSD Guardian. “California and the students at UCSD can make it so that Bernie wins the nomination. It’s rare where a bunch of students have that opportunity to make a difference.”

“Thank you for keeping activism alive on your campus,” Dawson told the UCSD community. “There are a lot of injustices happening right at home, and we need your attention on it.”

Cohen explained that in order for Sanders to win the Democratic nomination, there would need to be an overwhelming majority of the California vote in his favor. He aims to galvanize the UCSD student body to participate in the upcoming primary.

“What Bernie needs to do in California is win in a landslide,” Cohen said. “The reality is that we’re all little grains of sand, and if we all work together, we can create [that] landslide.”

According to Melinda Markowitz, registered nurse and President of the California Nurses Association, Sanders’ goal of making tuition free at public colleges and universities is a major reason why NNU and Ben & Jerry’s are campaigning at schools throughout the United States.

“[College students] have a special concern because they’re going to school and they’re going to have huge debts at the end of their education,” Markowitz told the Guardian. “Bernie feels that nobody should have to [go into debt for that reason].”

Student organization Tritons for Bernie coordinated with NNU to host the event. Revelle College senior and event organizer Pooja Ekbote explained that NNU took the initiative to bring the campaign to campus.

“National Nurses United reached out to us because they were going around all the UC campuses holding the free ice cream event to build hype around getting out to vote,” Ekbote said.

Ekbote shared that the student organization received approval for the event from administration this past weekend. As the primary election draws near, Cohen and NNU are traveling around California as quickly as possible. Tritons for Bernie worked on a compressed schedule to ensure that the logistics for the event were properly handled.

“It was short notice,” Ekbote told the Guardian. “We learned they were coming this weekend. We got the tables reserved, and parking done yesterday. They’re on a tight schedule because the primaries are only in two weeks, so things are happening kind of fast.”

Revelle senior Karla Garibay explained that the free ice cream and Sanders affiliation caught her attention and prompted her to take part in the event.
“I was just walking down Library Walk, and I saw somebody with a Ben & Jerry’s cup and Bernie sticker, so I wanted to see what was going on,” Garibay said.

Garibay praised the event and expressed that Cohen’s endorsement works in Sanders’ favor.

“I think it’s great that they’re doing this,” Garibay told the Guardian. “[Ben & Jerry’s is] something college students really love, so if Ben is advocating for Bernie, then that looks really good for [Sanders].”