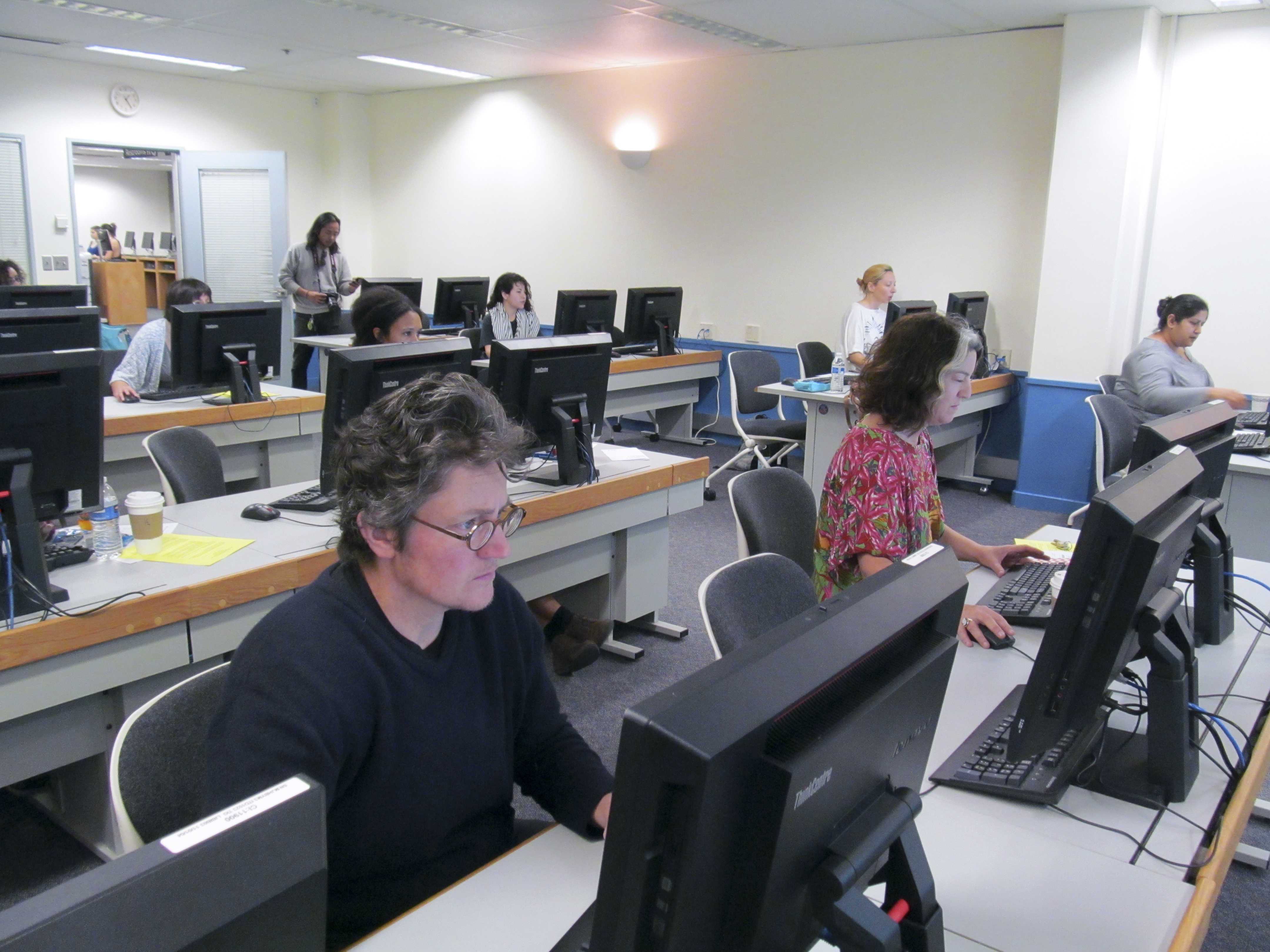 College students know that referencing a Wikipedia article in a paper is a universal taboo  — a lazy research tactic guaranteed to diminish the legitimacy of any academic argument.

But that doesn’t mean they avoid Wikipedia. No, students regularly turn to “the free encyclopedia” because it offers quick, logical-sounding answers to their desperate, mid-paper uncertainties. But why should a website habitually accessed by so many people remain a source of bias when it is open to editing by such a diverse population?

Looking to narrow a gender gap just as prominent online as in real life, the founders behind the Art+Feminism Wikipedia Edit-A-Thon are starting with one of the world’s most visited sites.

In a sense, the online presence of Wikipedia is inescapable. Even Google — the most used website in the world — offers a conveniently short, bolded answer to searches at the top of its results that is plucked straight from the pages of Wikipedia. Hence, it makes sense that a campaign looking to tackle a modern issue of inequality would start with a site whose biases and inaccuracies — though ignored in the name of convenience — can be easily fixed.

The Art+Wikipedia Edit-a-Thon started in New York as an event meant to bring together artists, feminists and eager Wikipedia contributors in a common effort to lessen the site’s blatant gender gap. A 2011 survey determined that women make up less than 15 percent of Wikipedia’s active contributors and less than 8 percent of its editors. This drastic difference between male and female involvement doesn’t seem to be improving, and the result is an ongoing bias — an underrepresentation of women and the documentation of their achievements.

Since its debut last year, the event has expanded, with satellite events put on by willing volunteers popping up all over the nation. Graduate students within the UCSD department of visual arts have brought the event to San Diego in the hopes that it will encourage students to recognize the site’s unequal coverage of male and female artists and, as host Angela Washko puts it, decrease Wikipedia’s bias.

Washko, responsible for helping to bring the campaign to San Diego, saw the Edit-A-Thon as a good fit for UCSD.

“I had been familiar with the umbrella event in [New York] that started it all last year,” she told the UCSD Guardian. “As an artist [myself], through a community of internet artists, I became more and more aware of how quickly it changed from one event to more and more events. And the effectiveness of it was well-documented.”

The aim of the campaign is fairly specific: tackling the Wikipedia biases by focusing primarily on women and the arts. This focus derives from the controversy spurred by the site’s misrepresentation of female artists — the most notable case of which involving artist-philosopher Adrian Piper. Unsatisfied with the inaccuracies in her Wikipedia page, Piper requested that it be deleted. While her request was eventually acknowledged, the page reconstructed in its place offered only a new set of false claims. Following Piper’s struggle with the site, art activists quickly directed their attention toward Wikipedia, setting out to balance the coverage of male and female artists and diminish the misrepresentation of women.

Washko emphasizes that, to avoid similar misrepresentations in the future and to correct current errors, the participants of the Edit-A-Thon should add to Wikipedia female artists whose notable achievements have been overlooked.

But exactly how will these blossoming editors address who should and should not be added to the free encyclopedia?

“We’re looking at historical notoriety in terms of whether their work has been considered by critics of their field to be important,” Washko said. “Things that have not made their way onto Wikipedia: historically important artists, theorists, critics and writers — either those who have not made it or those who have and what is [on their page] is not representative of their work.”

Washko said that the process has involved a lot of research. Indeed, with a long list of female artists Wikipedia either misrepresents or briefly mentions, the participants in the campaign have a lot of editing ahead of them.

Yet contributing to the Art+Feminism Wikipedia Edit-A-Thon does not require any prior editing knowledge. The hosts of the event, Washko and her fellow graduate students, offer tutorials and reference materials for beginners eager to contribute. At the very least, the campaign aims to encourage people to take interest in editing and correcting a site they probably rely on regularly.

“It is open and accessible to people who have never edited Wikipedia before,” Washko said. “There are training sessions every hour. We hope everyone will leave learning how to publish a stub article.”

Washko said that she hopes the San Diego satellite event, which took place at 1 p.m. this past Sunday, will also attract more Southern California-based artists and art to Wikipedia. In bringing the New York-based event to San Diego, Washko and her fellow graduate students will help make the Art+Feminism Wikipedia Edit-A-Thon a national movement.

Certainly, with the support of determined volunteers and motivated participants, the campaign will succeed in narrowing Wikipedia’s gender gap and contributing missing pages to an incomplete collection.

One thought on “Wiki-ty Whack”