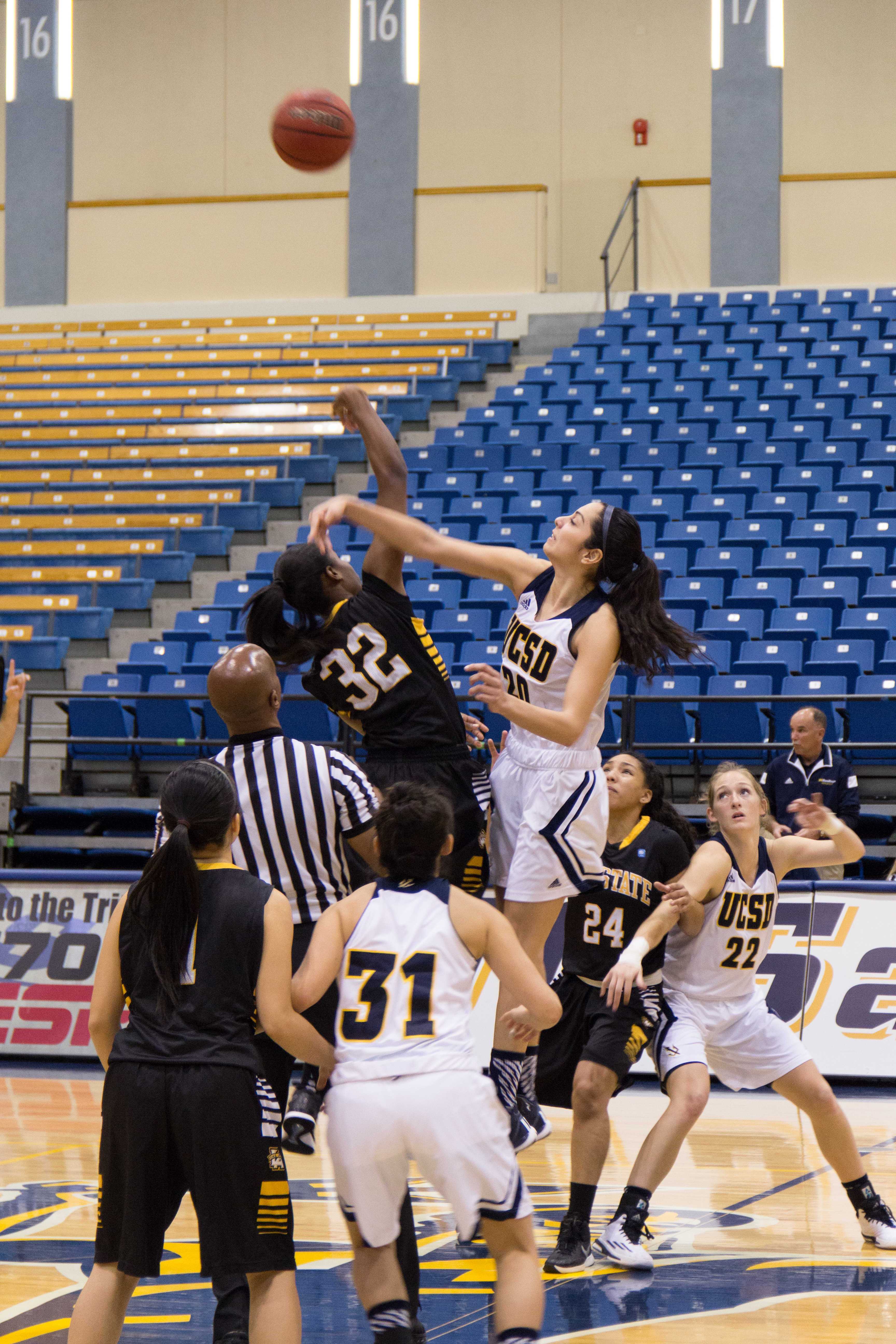 UCSD stuns Humboldt State on the road and wins at CSU San Bernardino to secure the fourth seed in next week’s CCAA tournament.

UCSD is on a roll. As the Triton women ended the regular season, they extended their winning streak to seven games with a pair of impressive wins over the past week. The Tritons decisively handed No.15 nationally ranked Humboldt State (23–4, 19–4 in California Collegiate Athletic Association) their first home loss of the season on Thursday with a 78–63 win before edging out Cal State San Bernardino (18–8, 14–8) 64–61 on Saturday night.

UCSD ends the regular season 18–9 overall and 16–6 in league play, and will enter the postseason with confidence as the fourth seed in the CCAA tournament.

On Thursday night, the Tritons jumped to an early 7–2 lead, before Humboldt State tied the game up at 15. After the Lumberjacks went up 25–18, UCSD charged for a 16–7 run to close the half. Two baskets by junior forward Farrah Shokoor and two jumpers from senior center Dana Webster and senior guard Miranda Seto helped the Tritons take a 34–32 lead going into halftime.

With four minutes gone in the second half, Humboldt State tied the score up at 40. However, UCSD put up another big 17–7 run to go up by 10. With four minutes remaining, Humboldt State closed in on the Tritons and only trailed by five points. The Lumberjacks decided to start fouling the Tritons and stop the clock, but UCSD came up clutch and made 14 consecutive free throws to close out a 78–63 victory over the top team in the conference.

“We came out and had a very good game,” UCSD head coach Heidi VanDerveer said. “Playing teams for the second time, we can prepare and figure out offensive and defensive schemes so I think we were really well-prepared. We especially played great defense and that helped us get this big win.”

Shokoor had her way and recorded her 14th double-double of the season with an impressive stat line of 20 points, 16 rebounds and four blocks. Webster and sophomore guard Beth Mounier each had 12 points off the bench.

After halftime, Cal State San Bernardino put the pressure on the Tritons to grab a 51–46 lead. Seto and Webster would get the lead back on a 6–0 run with 8:43 left to play.

The contest remained tight until the end, when Cal State San Bernardino cut the UCSD 62–61 lead to one with 1:29 left. Webster came up big on the next possession and hit a jumper that put the game away for UCSD.

“Again, we have a very deep bench and we got great contribution by [redshirt freshman guard] Taylor [Tanita] and Dana, as well as [junior center] Emily Morris,” VanDerveer said. “We are not a one-player’s team, although Farrah is having a fantastic season. Dana Webster gives us a very good low-post solution and had a great game today.”

Webster had 17 points, while Taylor Tanita had 13 points and made three of her four attempts from downtown. Mounier again scored in double figures and had 12 points. Shokoor had another dominant game as she grabbed a game-high 15 rebounds.

With the two wins over the weekend, UCSD finishes the regular season as the fourth-best team in the conference and will play Cal State San Bernardino again in the first round of the CCAA Championship Tournament. If the Tritons are to win, they will face first-seed Cal State Dominguez Hills in the semifinal round.

UCSD looks to be a team to reckon with in this year’s tournament and clearly has the ability to defeat any team that stands in its way. Tip-off for game one will be Thursday, March 5 at noon at Stockton Arena in Stockton.