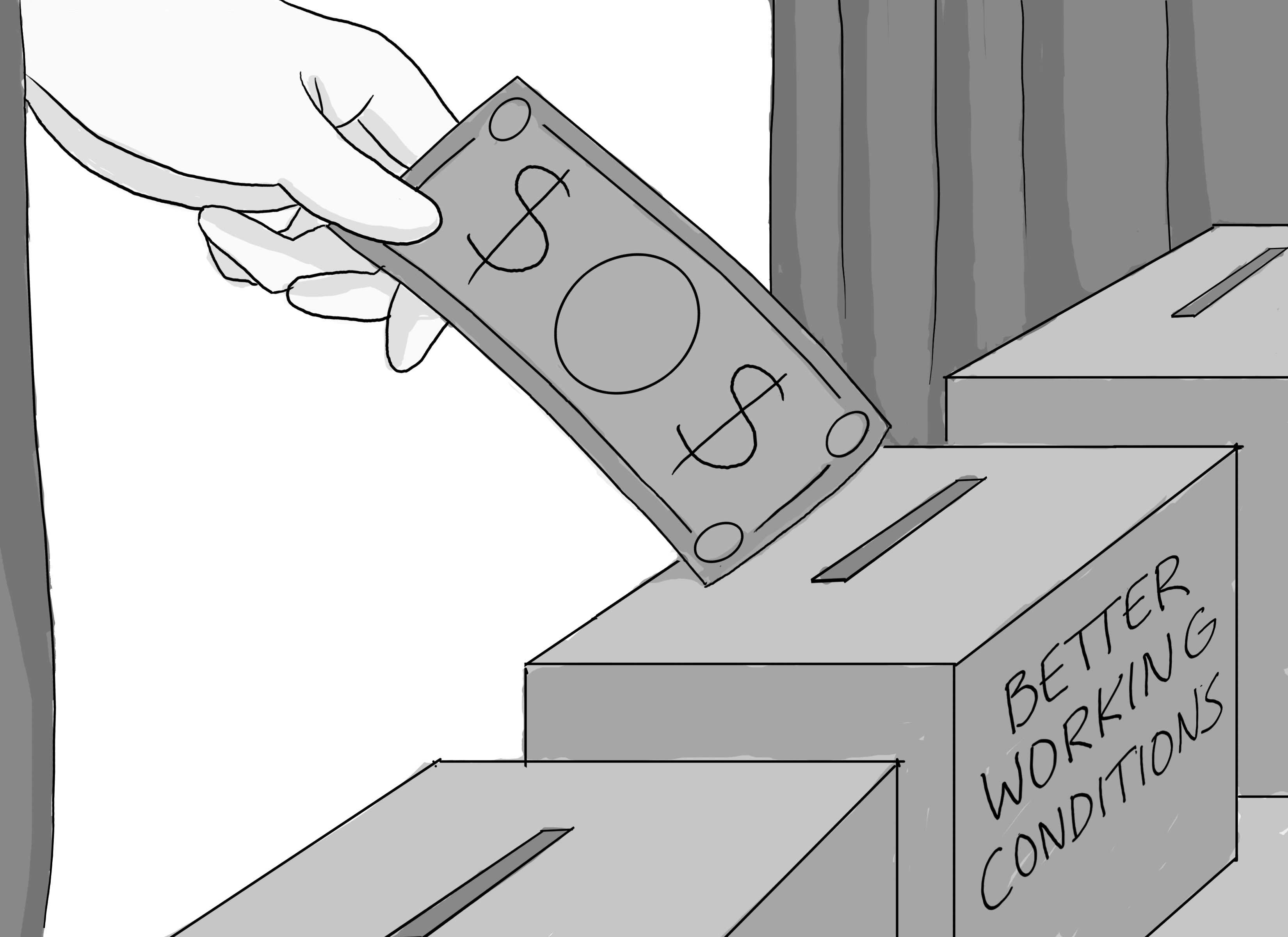 This holiday season, college students should be mindful of where they choose to spend their money.

Globalization has changed the way the international economy works. These days, how money is spent in the first world influences politics in countries abroad more than is known. In many cases, if the goods are imported and cheap, it’s bad news for the exporting country.

The garment industry is notorious for the exploitation and mistreatment of workers. Corporate chains deliberately outsource their factories to countries with lax labor laws. A good example is Bangladesh, where brands such as Wal-Mart, JC Penny, H&M and Gap have factories set up, according to progressive news site CommonDreams. The working conditions in the factories are brutal, and Bangladesh’s factories are infamous for lethal fires. According to Clean Clothes Campaign, more than 500 Bangladeshi workers have died in garment factory fires since 2006.

Something students don’t realize is that college-logo apparel is mostly made in sweatshops like Bangladesh’s. It may be hard to believe that a group of students can completely alter the practices of these established industries, but the best way for young adults to positively and significantly influence countries abroad is through paying attention to what they buy. This is the idea of voting with your money, and it should be taken more seriously. Like Bangladesh, there’s college apparel being made in the sweat-shops in the Dominican Republic, according to the United Students Against Sweatshops. However, in early 2013, students collectively joined with workers in Dominican Republic to pressure brands in the region to create better working conditions. The result is a living wage factory known as Alta Gracia. A living wage means factory workers have decent hours, safe working conditions and better pay. Because of the improved wages, many workers can now afford to take out loans for new businesses or start a college savings account for their kids, thus contributing to their local economy. Best of all, this Alta Gracia gear is already available at the UCSD bookstore for relatively cheap prices.

Then there is the food industry. Take the Chiquita company, which is one of four companies selling bananas globally. While supplying Americans their bananas, they’ve also supplied $1.7 million in payments to the United Auto-Defense Forces of Colombia between the years of 1997 and 2004, according to their own records. The AUC is the umbrella rebel group responsible for countless human rights violations committed during Colombia’s 50-year armed conflict. The fight between the AUC and the Colombian government is not only destabilizing overall, but it is also specifically hurtful to the banana workers in the fields. According to the National Union School, between 1991 and 2006, the conflict resulted in 668 unionist deaths from one main banana union alone. Those unions benefit workers by giving them more rights that keep them from being exploited. As farfetched as it may sound, buying a Chiquita banana in America indirectly funds the fight against the Colombian government and exploits the very workers that picked those bananas.

In the case of the bananas, buying locally provides a way for students to not invest their money in the Colombian conflict while still getting their fruit. For one, students are keeping capital away from Chiquita and the AUC. Secondly, buying local means money stays in the community. The New Economics Foundation, an independent British economic think tank, found that twice as much money stays in the community when residents buy locally.

The broad impact of a single purchase is a direct result of globalization. Although sometimes harmful, there is a positive side to this. It’s a hierarchical system with consumers at the top, followed by corporations with workers underneath. The money starts with the consumers and flows down to the workers, meaning that ultimately, the consumers have the power.

The fact of the matter is that consumer dollars already vote. Whenever something is purchased, the money goes towards influencing some system somewhere. Students should start thinking about the economies they are funding through the items they buy. Ten dollars spent on clothes can either go towards funding a sweatshop or funding a living wage factory. Either way, the consumer gets their goods, but where their money went makes a huge difference. Every time someone buys something, they are supporting and voting for a system, and it’s about time students become informed voters.