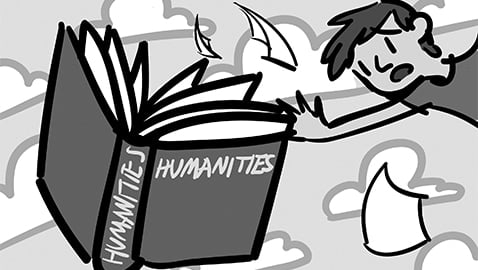 Students have lost sight of the value in arts and humanities education, despite the foundational knowledge and versatile skills that these fields provide.

Five hundred years ago, scholars strove toward the ideal of the fabled “Renaissance man,” best exemplified by figures such as Leonardo da Vinci, Michelangelo, Galileo, Copernicus and Ibn Sina, well-rounded individuals educated in a variety of disciplines. Five centuries later, society seems to have forgotten that these men, the founding fathers of modern science, represented the fruits of an education in all disciplines, with equal attention given to arts, humanities, math and the natural sciences. It is easy to discount the current value of an education in the arts and in traditional humanities such as philosophy. However, it is important, now more than ever, to appreciate the integral role played by these often-overlooked fields in our society and culture.

Aside from the obvious reasoning that the arts make up the core of our cultural activities outside the workplace, more liberal fields of study are actually extremely valuable in the workplace, especially for those who want to move into positions of leadership. In a 2007 study, researchers from the Federal Office of Occupational Statistics and Employment Projection found that employers search for general traits like good communication skills, critical thinking abilities and creativity in their potential hires. Humanities provide these foundational skills. Qualities like a strong analytical mindset or eloquent verbal and written skills are essential for most careers and are not going to become obsolete any time soon. It is fairly easy to disprove the stereotype that liberal arts majors are all going to be unemployed or left without career options. In fact, according to the Association of American Medical Colleges, “medical schools accepted 43 percent of the biological sciences majors, 47 percent of physical sciences majors, 51 percent of humanities majors, and 45 percent of social sciences majors who applied in 2010.” The numbers speak for themselves: Clearly, humanities majors are equally respected when applying to elite institutions, even for studies in the natural sciences. The testimonials of medical school admissions committee members back up this reasoning as well, stating that the “essential skills of acquiring, synthesizing, applying and communicating information” can be achieved through “a wide variety of academic disciplines,” humanities included.

Trendy majors such as computer science and biotechnology may make the most money at the moment, but given 30 years, the economy and the world in general may completely change the definition of what is or isn’t a practical degree or educational background. For example, in an article for the Wall Street Journal, college administrator Philip Dean mentions the example of studying during the 1980s. During the Cold War, many students believed that studying anything Russia-related would be practical. Yet, once the war was over, these students were forced to find work in other fields. 20 years later, Russia is again at the forefront of political news and the these people’s skillsets are desired once more. Despite the lack of a clear market for their expertise, these people stayed well-employed in the meantime, which speaks volumes about the versatility of the skills that they acquired in their education. Clearly, the value of a liberal arts education does not dissipate over time.

International students seem to have a better understanding of the cognitive benefits of a humanities education and all of the different ways in which it can be applied. The sheer popularity of the science, technology, engineering and mathematics fields in the U.S. is not echoed as loudly by the rest of the world. While there is no lack of students majoring in those disciplines, the majority of international students who come to the U.S. to pursue an education do not major in STEM fields, according to the National Science Foundation. The rest of the world still seems to see the importance of education for education’s sake, as opposed to only pursuing things that will make the most money. But, this is an issue that can be easily fixed with time.

While it is unreasonable to expect that every student will major in something arts and humanities related, it is time we started bringing back some of the lost respect for these fields. They provide important foundational knowledge, valuable skills and a wider world view. Georgetown computer science professor Cal Newport argues that for those interested in the humanities, a major in those fields will not steer them in the wrong direction, but could be a useful complement to a current practicality of a STEM minor. And, for those who are legitimately interested in STEM fields, a humanities minor can provide all of the aforementioned liberal arts skills without limiting major choices.

Going forward, it is imperative that we do not forget just how crucial the humanities are to society and our culture. These fields represent knowledge that runs deep and relates to just about everything, and it is time to give the humanities and arts the credence that they deserve.