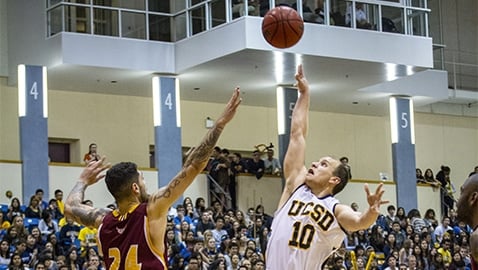 The UCSD men’s basketball team took one step closer to solidifying its position in the California Collegiate Athletic Association tournament after blowing out San Francisco State (10–10), scoring 76–51 on Friday before taking one step back, losing the following day to Sonoma State (5–15) by 76–58 in its final home game of the season.

UCSD is now tied with San Francisco State for the sixth and final CCAA tournament berth.

The Tritons’ first basket against San Francisco State — a corner three sunk by freshman redshirt guard Aleks Lipovic — opened the floodgates for UCSD’s perimeter shooters. The Tritons hit 17 three-pointers on 52 percent shooting from beyond the arc, seven of which came from Lipovic.

“It’s a big part of our offense,” UCSD head coach Eric Olen said when asked about their perimeter offense. “We have some guys that can shoot the ball and we have a point guard that can find them. We really got it going tonight and sometimes that stuff is contagious.”

The first half was close, as the Tritons struggled to stop the Gators, who shot 57 percent from the field. However, the Tritons’ seven threes in the first half kept the game tight with the score 34–33 at intermission.

“He’s been huge for us and he was obviously huge for us tonight,” Olen said. “When he’s aggressive, and that’s the kind of way he’s developed throughout the year, you can see him getting more and more comfortable. You can see him starting to be more aggressive and attacking the basket.”

Sophomore center Zach McMillan made his return from injury after missing six games, playing five minutes and grabbing a rebound. McMillan leads the team in rebounding at 6.1 per game.“He brings depth to us, especially inside,” Olen said. “We’re playing some guards inside right now because we’ve been limited with injuries. Zach brings a toughness, a physicality, a defensive presence.”

The following night, UCSD failed to repeat its impressive shooting performance, as Sonoma State bested the Tritons in UCSD’s last home game of the season. Senior guards James McCann, Matt Bailey and MacKenzie McCullough were honored before the game.With McCullough out for the season due to an ACL injury and McMillan still returning to form, the Tritons’ biggest weakness against the Seawolves was their lack of size. Sonoma State’s senior forwards Steve Lackey, 6 feet 7 inches, and Justin Herold, 6 feet 8 inches, took advantage of the gap down low, allowing the Seawolves to out-rebound the Tritons 37–26 while also outscoring 26–16 in the paint.A barrage of Sonoma State three-pointers in the first half gave the Seawolves a 10-point lead.

The Tritons never led after the 13-minute mark in the first half. McCann and sophomore forward Drew Dyer were the only two Tritons to finish the game in double digits, scoring 20 points and 19 points, respectively. With only two games remaining in the season, the Tritons sit with a 10–10 record, still struggling for that sixth and final spot for the postseason tournament.The Tritons will play at Cal State Los Angeles (11–9) next Friday and at Cal State Dominguez Hills (4–16) next Saturday, games that will determine the teams that will contend for the CCAA Championship. UCSD won both matchups earlier in the season.

“Anything can happen once we get into March and that’s just the way basketball is,” Klie said when asked about the remaining stretch of the season. “We’re trying to put ourselves in that position right now and we’ll see what happens when we get there. I think this team can go a long way. We’re a special team and we know if we bring it every night we can beat anybody, anytime.”