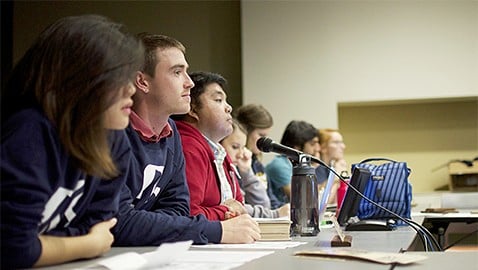 Drastic reforms to A.S. Council bylaws have stalled, and will possibly be discharged, after three of the six college councils chose through a vote not to ratify changes to the A.S. constitution. The changes, which were drafted by the Bylaws Committee and passed by A.S. Council in Fall Quarter 2013, needed to be ratified by four out of six colleges needed to pass and become part of the constitution. Instead, the standing rules, which A.S. Council passed in Week 3 of Winter Quarter 2014, have been amended to match the current constitution.

One highly contested change was replacing the elected position of VP Finance and Resources with an appointed Financial Controller position. Another change would make Academic Division Senators non-voting members of A.S. Council but voting members on their own Academic Representatives Council, add two International Senators, add one more Transfer Senator and cut one First Year Senator position. Both of these amendments failed.

“I can’t help but feeling a little bit disappointed, especially with the colleges that voted everything down,” Social Sciences Senator and Bylaws Committee member Colin King said. “I don’t see a valid reason for that, because some of these things were almost necessary. It makes me feel at least personally attacked, and like there was some different motive than just to put A.S. in check.”

Some of the suspicion of college councils’ possible ulterior motives come from secrecy surrounding SCERC’s voting on the constitution. Klein said that SCERC members initially asked lots of questions when he presented the constitution amendments at SCERC’s weekly meeting during Week 4. The next week, however, when he brought Bylaws Committee members A.S. President Andy Buselt and AVP Academic Affairs Robby Boparai to answer questions, SCERC asked no questions and tabled voting to the next week. The following week, Buselt and VP Finance and Resources Sean O’Neal returned to the weekly meeting to answer questions, but SCERC Vice President Aman Joea motioned to move into an executive session, imposing that only of SCERC members could be allowed in the meeting.

“I think people would be surprised by the open hostility and lack of trust between SCERC and A.S.,” Klein said. “They had already set their minds on saying no.”
SCERC is apparently equally suspicious of A.S. Council. A SCERC member who spoke to the Guardian on condition of anonymity said that SCERC distrusted A.S. Council because of a perceived lack of transparency; however, they were not willing to let A.S. Council answer questions because of a lack of trust. Because much of the Bylaws Committee was comprised of the Keep it Real slate members, the source said, some SCERC members suspected that the constitution changes were an attempt to keep that slate in power. However, the constitution amendments actually mandated that college and academic senators run independent of slates, meaning that a maximum of 11 candidates could run on one slate. The source was unaware of this component of the amendments and suspected that much of SCERC was also unaware.
According to the SCERC member, the biggest opposition to the amendments was the change from VP Student Life to VP Campus Affairs, but SCERC believed that the changes to the position would make it too much responsibility for one person to hold. However, because SCSC passed this amendment along with Muir College Council, Revelle College Council and Warren College Student Council, it will be in effect for this upcoming election.

Sixth College Senator Allison Bagnol believes that SCSC voted based on the content of the constitution, and thus failed and passed some of the amendments. However, due to SCSC members’ reasoning for failing those amendments, she wonders if some members’ voting decisions were influenced in part by the less-than-friendly relationship between SCSC and A.S. Council..

“A.S. is oftentimes seen as purely issue-based, purely political, and purely bullshit,” Bagnol said. “College councils are seen as purely programming- and event-based. It seems like anything from A.S., from the college councils’ perspective, has negative connotations.”

The Bylaws Committee had hoped to put the constitutional changes to a student vote as a referendum on the spring ballot in order to bypass ratification by more than three councils. However, while potential referendum language received a majority vote in A.S. Council, it did not cross the three-fourths vote threshold it needed to be put to a student vote during this year’s election cycle.

“We felt that [the change] was very reactionary, because this proposed change to the ratification process came a week or two after we had failed their proposed changes,” Marshall Senator Kathleen Maguire said. “It didn’t feel like they had been looking at a historical problem and then seeking to alleviate it.”

Although many of the biggest changes will not be implemented for this year’s elections, the Bylaws Committee is hopeful that those amendments can be amended and passed in the future in order to best represent and serve the student body.

“We really looked shameful yesterday from the outside,” Bagnol said. “If I was a regular student looking at A.S. talking about bylaws for hours on end, I would feel really unrepresented and undervalued, and that’s just a big problem. I think it really stunted a lot of the productivity and projects and issues that I think are far more important than what we’re talking about now.”