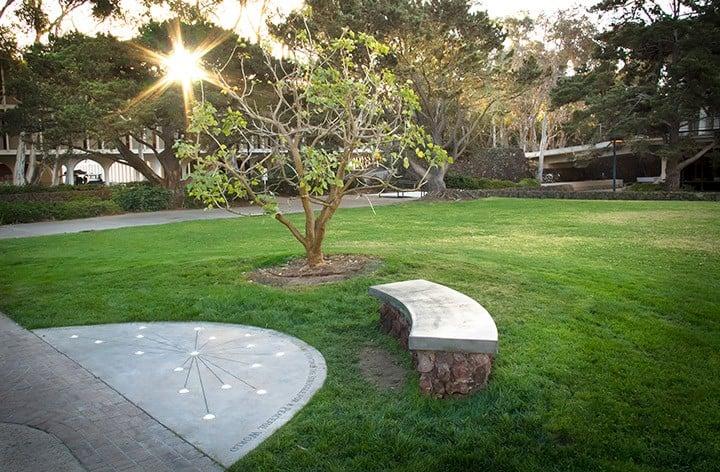 Revelle College recently unveiled a memorial next to the Revelle Plaza fountain that honors student activism for peace. The May 1970 Peace Memorial features a semicircle plaque with a constellation of lights, a coral tree and a bench — to provide a site of remembrance for the campus protests for peace. The inscription on the plaque reads, “For George Winne Jr., the student activists of May 1970 and all those who continue the struggle for a peaceful world.”

Ph.D. literature student Niall Twohig, along with a group of students in Thurgood Marshall College’s Dimensions of Culture program wanted to commemorate an important part of history that is often forgotten. Spurred by conversations with DOC students in discussions five years earlier, Twohig and a few others wanted to have a memorial in the former free speech area in Revelle to remember the histories of activism from the 1960–70s. The plaque memorializes the events of May 1970 and the unrest among the UCSD student population and the rest of the nation due to the Vietnam War.

One voice among the protests during the time was George Winne Jr., a UCSD graduating senior in History. He chose to self-immolate in Revelle Plaza on May 10, 1970 as an antiwar message. Although faculty and students have held vigils in Revelle Plaza to remember the students who protested, Twohig and the students felt that Winne’s memory fell into disrepute.

“Many people forgot his anti-war message and instead characterized him as a psychologically troubled loner who was disconnected from any social movement,” the
supporters of the May 1970 Peace Memorial said in their proposal.

According to Twohig, the idea for the memorial is to promote peace and to have a piece that represents student activism and the history behind student protest — an often buried or forgotten history — and so the memorial aims to restore the history to the campus space.

“Far from being a loner, Winne’s gesture was linked to countless people at UCSD, across the nation and around the world who desired a peaceful world and an end to warfare,” Twohig said. «The goal is to represent the desire that Winne and the student activists of stood for — a desire for peace and justice.”

With the help of literature professor Jorge Mariscal, director of the DOC program, students worked closely with the Resource Management and Planning staff on the design of the memorial to bring the concept to life.

“I hope that long after the people who worked on the memorial are gone, others will return to the site and find inspiration in its history and message,” Twohig said. “I hope that they see a larger shape beyond the individual and collective acts of 1970 — a desire that links student activists across time and across space.”