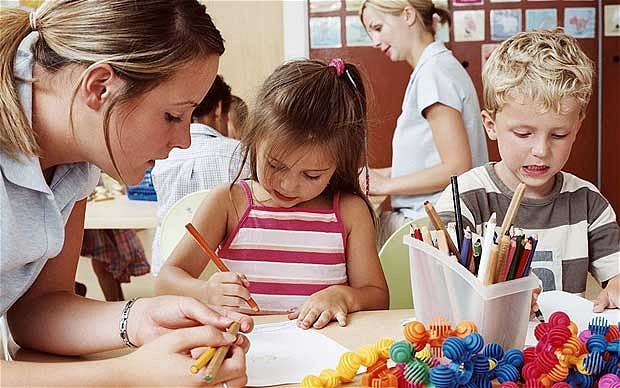 A 2009 graduate parent-only survey inspired the CCOC survey, asking parents why a majority of them were not using campus resources and subsequently asking about the alternative solutions that they were turning to instead.

Lorkovic used a contracted university company to release the survey in the Mesa and One Miramar Street housing communities as well as through the Grad Parents and Undergraduate Student Parents listservs.

The survey was released for three weeks, garnering replies from 140 graduate and undergraduate student parents.

“Compared to childcare centers across other UCs, childcare at UCSD falls slightly above the average range by about $300 per month,” the presentation said. “Students, faculty and staff have the perception that both ECEC and MCDC are not an accessible resource due to both the high cost and long wait list.”

Although subsidized for applicable student parents, ECEC monthly costs for child care range from $1643 to $124, while MCDC costs range between $1512 and $756 per month.

According to the survey, approximately 50 percent of university graduate families earn less than $45,000 annually, with graduate parents in all income brackets recognizing that the current monthly costs of the two centers prohibit many student parents from utilizing the spaces.

To combat the issue, Lorkovic, Johnson and Stephens analyzed the survey results and developed recommendations to alleviate childcare concerns that were presented to administration.

“We don’t want to look at [childcare] as a student problem,” Stephens said. “It’s a campus problem.”

The proposed actions include the creation of a low-cost university childcare co-op and the introduction of an application-based sliding scale reimbursement plan that would finance childcare support for low-income families not qualifying for subsidized childcare aid.

The team hopes to meet the concerns of the undergraduate student parent population as well, marking the first of such an initiative.

“We were focusing more on graduate students because of where we’re coming from, but it’s clear that undergrads also need support, and I really do think it’s important to emphasize the resolutions that we are going for,” Stephens said.

Last quarter, the GSA passed a council resolution in favor of reinvesting in graduate parents, calling for action to support student parents unable to pay for campus care and advocating for a graduate student fee referendum to subsidize childcare.

The resolution also supported the creation of a childcare website to provide ready access to childcare resources in and around UCSD, an initiative that was also discussed at last week’s campus climate meeting.

Lorkovic, Johnson and Stephens expect to introduce a similar resolution to A.S. Council in the near future, hoping to gain undergraduate student support.

The team now hopes to gain more administrative support in implementing its recommendations, with plans to pass a formal, detailed resolution through Academic Senate.

“Brandon, Rochelle and I have essentially started precursor steps toward a movement, and to further it, there needs to be a larger critical mass of people that hold administration accountable,” Johnson said.