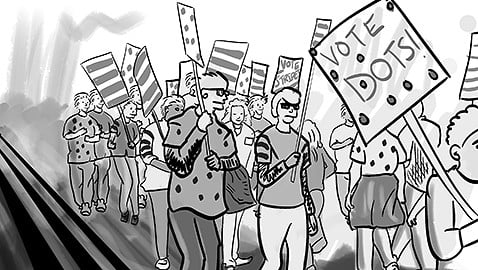 Last week’s finalization of the A.S. Council Standing Rules and Bylaws reforms comes almost a year after a grievance-filled, divisive and downright ugly election. Slate reform had been an issue on the back burner of A.S. legislation for quite a while, and we couldn’t be happier that changes finally materialized and passed Council last week. The changes will empower students to pick the best representatives for our campus and eliminate massive slates, which can dominate elections and overshadow smaller slates and independent candidates.

Limiting slate sizes to 11 candidates works well for our campus elections on a number of levels. With the change, the only councilmembers representing the entire campus are the President, VP External, VP Student Affairs and eight campuswide senators. With these positions making up the full 11 spots on a slate, campuswide parties can better focus on broad campus issues while college-specific and academic senators are forced to campaign directly to constituents. The council’s bylaw reforms will make senators more directly accountable to their own constituencies and will not allow for candidates to win elections simply for being affiliated with a specific slate.
Smaller slates will also benefit voter decision making by drawing a stark contrast between campuswide and college-specific issues. A.S. Council candidates — now disallowed from campaigning alongside college council candidates — will no longer be able to play favorites once elected in regard to funding or legislation.

The need to separate college council candidates from campuswide slates became apparent after the June 2013 Judicial Board decision that A.S. Council owed years of back funding to college councils. After the decision was announced, Muir, Marshall and Sixth College councils declined to force Council to begin repayment immediately. Although Sixth and Muir did end up requesting funding in October 2013, it seems the initial decision to decline the funds was a purely political move. Many, if not most of the seats on those councils were held by candidates who ran for office with “Keep it Real,” the slate that controls a large portion of A.S. Council. Separating college council and A.S. Council slates will prevent future pre-election alliances and will allow colleges to maintain their most constituent-focused priorities.

Perhaps the best-advised provision of last week’s reforms is the replacing of the VP Finance position with a Financial Controller job. While we feel that current VP Finance Sean O’Neal and last year’s Bryan Cassella both did exceptional jobs, the elected position risks allowing a poorly qualified candidate to take office. In a candidate interview with the Guardian last year, one VP Finance candidate cited their familiarity with using the Triton Activity Planner form as their most important qualification for the job. When millions of dollars in student fees are at stake, we need assurance that a responsible and qualified person is in office. Appointing a Financial Controller does just that, since council, if logical, will only appoint candidates based on experience and merit.

However, not all is perfect with the new standing rules and bylaws. The major change we don’t like is the bylaw changes’ that snip the number of freshman senator positions from three to two. Freshman just starting at UCSD are subject to the same representation as the rest of campus, but are the only constituents who do not elect the sitting councilmembers. Freshman senators are the only true representation for the freshman class, and cutting the number of positions limits the first-year voice on council. As a constituency that already makes up one quarter of the campus, it is unfair to reduce the amount of freshman senator positions.

Overall, this A.S. Council can pat itself on the back (more than usual) for a job well done on bylaw reforms. With some luck, the Spring 2014 elections will run smoother than last year’s, with new, innovative forms of campaigning for academic senators and college-specific positions. As A.S. Council is the highest form of peer representation at UCSD, student voters are entitled to strong leadership, and the new council bylaws are the first step in seeing that this is achieved.