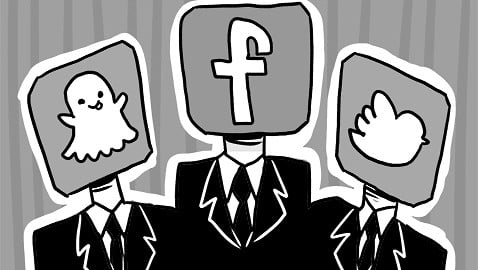 Nowadays, students looking to be competitive in the job market after college must, not only be qualified, but also conscious of the image they present on social media platforms. Companies have been utilizing social media both to recruit and filter out potential candidates — a method that, despite its convenience and originality, has numerous disadvantages and shortcomings. Social media as a form of recruitment further eradicates face-to-face communication, invades the boundary between personal and professional life and is overly trusting of the personas that individuals choose to project on Internet profiles.

According to the Jobvite Social Recruiting Survey, 92 percent of employers either currently use or plan to use social media as a recruiting tactic. Likeable Media, a New York marketing firm, gives potential hires the option to follow up through both Twitter and Snapchat, claiming that it demonstrates their ability to get a message across no matter what the platform is. While this process may seem innovative and appropriate in a business world of growing speeds, one must reflect on society’s dangerously expanding use of telecommunication.

Many businesses are now corresponding primarily through emails, text messages, websites or other technology-enabled media, leading to a decline in physical interactivity. Society has become consumed with online networking and enthralled by its shortcuts in sidestepping, tangible interaction. A UCLA study showed that “forgoing in-person meetings with clients can lead to misdirection and ultimately one or more parties being unsatisfied.”

The study also comments that “up to 93 percent of all communication is nonverbal. This includes eye contact, body language and posture,” indicating that when we correspond on social networking sites, meaning is lost in transition. Due to its impersonal nature, recruitment through social media disallows candidates from making a first impression, never mind a lasting one; without intimate correspondence, employers have a difficult time differentiating one person from the next. In-person interviews provide a more genuine representation of the individual and their abilities, whereas telecommunication allows them to construe an intelligent response.

Reviewing and assessing candidate profiles creates the potential for bias in the hiring process, not to mention excluding members of the public who do not utilize social media. Recruiters claim that by delving into social channels, they can make more informed hiring decisions; however, a study at Carnegie Mellon University revealed that much of the content being explored by these employers was indicative of religion, race, sexual orientation, family status or other personal information. Asking personally relevant questions during an interview violates federal laws prohibiting job discrimination, and thus companies “who screen their candidates on social media run the risk of discovering information they’re not allowed to have.” If such information is off-limits, employers should not be able to seek it underhandedly online; introducing personal information in a professional setting deviates from the non-discriminatory policies that every establishment should practice.

Professional recruiters should limit their span of media outreach to professional networking platforms in order to maintain the division between career and private life. Platforms such as Linkedin, Biznik, and Ecademy provide a starting point for recruiters to identify their candidates based on concrete skills and experience and supplement the interview process rather than replace it. Websites dedicated to business networking allow users to connect in a professional context with a profile that details their qualifications. Through these websites, users can regulate the information they share with recruiters, rather than openly share their religious views, photos from a weekend in Vegas or political tweets that would be available on other sites.

Outlets such as Facebook, Twitter, Snapchat and Instagram should be strictly social and have no business being employed as recruitment tools; one should not have to censor their identity on social media to guard against the snooping eye of employers. Such probing is an intrusion of private life and the personal uses for which the profile was created.

Social hiring enables the misuse of personal information, creates potential for inauthenticity and perpetuates the ever increasing dependency on technology as a means of communication. The creation and nourishment of professional relationships becomes difficult without face-to-face-interaction on a frequent basis. Moreover, media sites made for personal use should stay limited to personal use so as to prevent discrimination in the recruitment process. While the emergence of social hiring clearly illustrates an advancing society, interpersonal dealings and quality relations should not be sabotaged for the purpose of expediency.