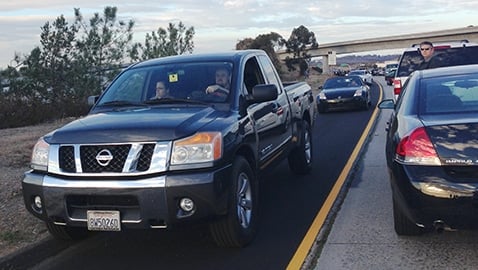 A bomb hoax between a brother and sister shut down the Interstate Highway 15 in both directions on Thanksgiving Day, causing traffic jams for two hours in the afternoon.

According to the California Highway Patrol, a woman called 911 around 2:45 p.m., claiming she had received a phone call from a number she didn’t recognize telling her there was a bomb in her car.

San Diego Bomb Squad officers arrived at the scene around 4 p.m. with a K-9 unit. According to officers, the dogs behaved as if there were a real bomb threat present.

However, the man who called in the bomb called his sister back to apologize for the prank.

Officials believe the woman genuinely didn’t know it was her brother on the first phone call and elected to arrest the man, 28-year-old Victor Diaz, on felony charges.

The freeways were reopened in both directions by 6:00 p.m.