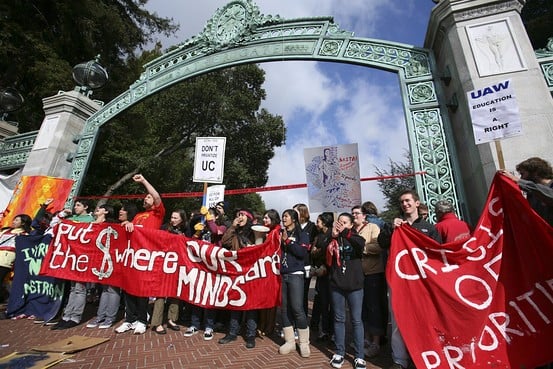 Newly minted University of California President Janet Napolitano has had quite the busy inaugural season, facing student criticism for her past policies while she was Homeland Security Secretary and drawing our scrutiny for her suspiciously timed DREAM Act scholarship plan. However, her latest administrative effort — to keep tuition steady for 2014–2015 — makes perfect sense to us.

Napolitano offered her proposal at a UC Regents meeting last week, emphasizing the need to continue the three-year trend of stabilizing tuition rates while expanding the usual revenue channels of grants and philanthropy. Once the governor’s official annual budget is released, the numbers — particularly the state’s funding allocation to the UC system — will demand more attention, but it looks to be a step in the right direction given the larger pattern of rampant tuition increases over the past decade. As in-state students currently shell out over $12,000 in tuition each year, we can definitely get behind any policy that prevents higher costs.

Administrators also brought up the possibility of the “cohort” plan, in which an incoming student’s initial costs would stay constant for all four years of their stay. This grants new students a needed sense of financial security and helps them evaluate whether their education will be affordable over the long run, but this proposal has its drawbacks. The plan essentially gives the UC administrators an unfair license to palm off their financial shortfalls on to future incoming classes; although it’s difficult to implement, we would much rather see tuition hikes definitively frozen for all students.

But despite Napolitano’s helpful turn, we may not be out of the woods quite yet. The UC Regents have yet to approve the admittedly ambitious policy, and the UC system needs to find substantial funding from somewhere. Private donations and grants can only accomplish so much — the UC fiscal plan for 2014–2015 reveals that the system has already budgeted for an additional $121 million in state funding if it is to keep tuition levels stable. Unfortunately, Gov. Jerry Brown has indicated that after the $142 million UC funding increase he signed this year, it’s unlikely that California will loosen its purse strings any further.

In order to actually solve the problem and help students, both the UC administration and the governor will need to be more flexible and compromise. Brown mentioned at a recent meeting that he is open to giving the UC campuses an additional 5 percent in funding but that the increase will only happen if the Regents’ keep student tuition rates level. University administrators, for their part, need to find an effective way to work with the funding they’ve been allocated; although it might require cuts to some campus services, the UC system must recognize the importance of affordability.

Brown also needs to prioritize students’ interests over political stunts. Last year, Brown threatened to cut directly from UC funding if his tax plan — Proposition 30 — was not passed, which would have resulted in students paying nearly $2500 more per year. Despite the necessity of the Proposition 30 legislation, our tuition cannot be held hostage for the governor’s political agenda.

So while we applaud Napolitano’s steps to limit the damage to our pocketbooks, it is important that administrators and the state see eye-to-eye on how to avert tuition hikes. We hope that this time around, both Brown and the Regents will have our best interests in mind and give UC campuses the funding they need for student affordability.