Wildfire season continues to persist statewide following a late start to the annual natural disaster event caused by wetter than usual winter and spring seasons. Analysts predict that the increase in vegetation from the wet season will aid as fuel for the fires, making the 2019 wildfire season an even greater threat than in years past.

Wildfire season has no defined start date, as unpredictable weather patterns and other factors may affect fire activity. On average, fires become more common in the summer months of June, July, and August, burning until November and December at the latest. 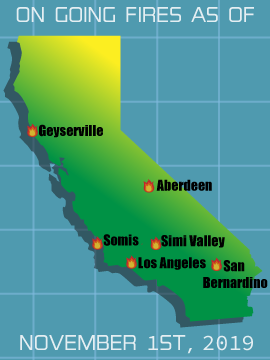 “If we’re lucky, this […] year will simply be a challenging one, ” said Jeff Rupert, director of the U.S. Department of the Interior’s Office of Wildland Fire, in a June 2019 Senate committee meeting about wildfire outlook and fire management.

However, extreme changes in climate have emboldened fires, resulting in longer ones that are more destructive and deadly, such as the Camp Fire in 2018 that killed at least 85 people and ravaged the town of Paradise, California. In fact, fires have become so common year-round that the term “wildfire season” is starting to be considered obsolete by some experts.

“It has been a trend now, for many years, that the fire season is, in reality, a fire year,” Rupert said.

The situation has begun to deteriorate with October’s advent of strong Santa Ana winds that have prompted San Diego County officials to issue Red Flag Warnings. These warnings, according to the National Weather Service, are issued when conditions like warmer temperatures, low humidity, and strong winds are expected to produce an increased risk of fire danger.

Throughout October, the California Department of Forestry and Fire Protection, more commonly known as Cal Fire, recorded over 50 fires in the state. Of those fires, 23 were reported in Southern California, with notable fires occurring in San Diego and Los Angeles counties.

The Copper Fire wrapped up October, occurring on Halloween. Having originated south of Otay Mountain in Baja California, Cal Fire was not concerned with the Copper Fire until it reached Chula Vista and San Diego on early Thursday morning, where it was quickly put out by firefighters.

#CopperFire near Otay Mtn [update] The fire is approximately 5 acres and entirely within Mexico.

Fighting fires such as the Copper Fire and the Palisades Fire, which covered 42 acres in Los Angeles, is not entirely left to firefighters, however. Using technology from the San Diego Computer Center at UC San Diego, firefighters can strategize knowing where fires will spread, convenient when resources are limited.

Known as WIFIRE, the tool runs simulations that predict and map a fire’s path six hours ahead of time. Predictions are made with data gathered from the National Weather Service and local weather stations based in San Diego. Ilkay Altintas, a research director at the San Diego Supercomputer Center, believes that additional data will result in more reliable predictions.

She said, “Something we should really recognize about WIFIRE is that as we have more access to more data, it will actually be more and more accurate. We can actually use that to learn the dynamics of the fire and assimilate that data into regular fire models to adjust the models.”

Although WIFIRE is a powerful tool, it doesn’t physically fight fires, leaving firefighters to combat them alone. This could prove to be overwhelming in the face of a potent fire season.

As a result, extra manpower and resources are being supplied to aid the state’s efforts in fighting the flames, with 500 Cal Fire and 150 out-of-state fire officials prepared to fight. Most of them are being diverted to Northern California as the situation there has escalated significantly, with power being shut off to certain parts of the Bay Area.

California’s governor said that the state was determined to reshape Pacific Gas & Electric — even if it meant a public takeover — after a series of wildfires linked to the company’s equipment and a furor over its handling of blackouts https://t.co/8AdiJT5Qk5

San Diego has also experienced power outages, though not as drastic when compared to the Bay Area. Two weeks ago, San Diego Gas & Electric cut power off to about 65,000 people, whereas Pacific Gas & Electric cut power off to about 2.5 million. While both companies serve different markets, San Jose’s The Mercury News has reported that SDG&E has been proactive in reducing fire risk by burying power lines underground and replacing wood poles with steel ones.

As of the time of writing this article, no reported wildfires were currently taking place in San Diego County.

Read more about WIFIRE from a Guardian article posted in 2017.