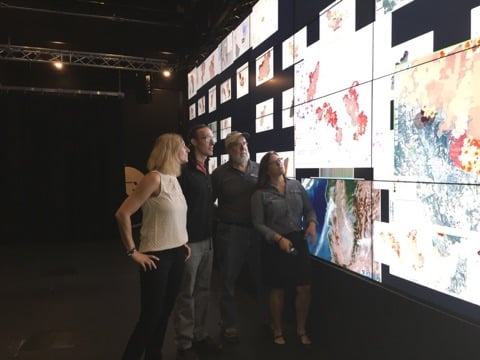 A UC San Diego research project called WIFIRE is helping fire departments across the country predict fires up to six hours in advance due to its powerful real-time visualization fire modeling capability. During the recent Northern Californian wildfires in Mendocino, Napa, and Sonoma, WIFIRE has had over 3 million hits and over 300,000 people visiting the project’s website at the same time.

Ilkay Altintas, a research director at the San Diego Supercomputer Center, is the principal investigator of this project which collects data on fires and places it on a map.

“It’s an integrated resource for fire information. It federates data related to fires from national resources and other partners that we have. It visualizes that on the map. It’s a research project, so it has other components to it like using the visualizations in 3-D cave environments at the Qualcomm Institute here and we have some fire modelling research,” Altintas said.

Back in 2003, the San Diego Supercomputer Center received a grant from the National Sciences Foundation to build a high-performance wireless network. This technology and Altintas’ encounter with a wildfire that same year on a drive between Santa Barbara and San Diego were major factors in the development of the research in 2013.

“The main reason NSF funded it at the time was for scientists who had sensors out in the field to have connectivity to the back county. They had these radio towers, so they didn’t have to constantly send graduate students to collect data out in the field. Actually, data was streaming in real time but in their labs,” Altintas said.

The technology’s ability to gather data from different sources like environmental sensors and towers on mountaintops with cameras has caught the attention of fire response agencies since 2003.

“At some point it was the only station with all these tools where you could see the fire. Because when a fire happens, actually, no one knows where the fire is. For wildlife fires, the exact location of the fires are always a little bit of a mystery because it is always moving over time. Without constant monitoring of the fire, it’s really hard to tell,” Altintas stated.

This real-time data collection capability and the interest of the fire response agencies inspired Altintas and her team to spearhead the research in the monitoring and predictive fire-modelling direction by integrating more data sources including satellite mapping and Geographic Information System layer visualizations. “Something we should really recognize about WIFIRE is that as we have more access to more data, it will actually be more and more accurate. We can actually use that to learn the dynamics of the fire and assimilate that data into regular fire models to adjust the models. Each time we are adjusting the model with what we have learned about in the last hour, last 12 hours, etc.” Altintas added.

This research project and tool has already made an impact in the community through a recent collaboration with the Los Angeles Fire Department. However, the team is looking to improve its six-hour predicting capability model and Altintas recognizes the need to expand the research, pointing out that in the future “there is a component of it that needs to be operationalized and sustainable.”