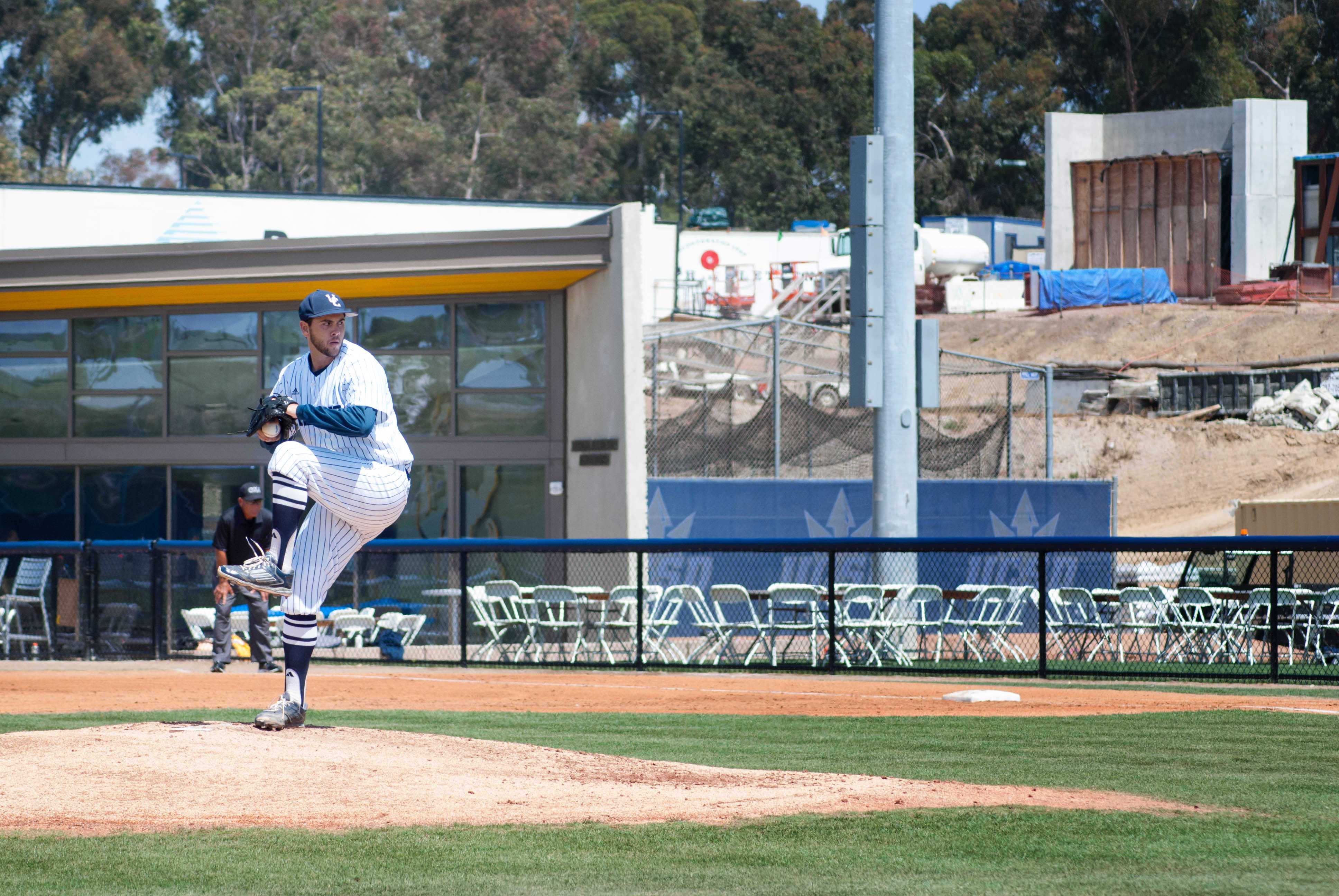 The No. 26 Tritons concluded their regular baseball season with a split-venue California Collegiate Athletic Association four-game series against Cal State Los Angeles last weekend with mixed results. Saturday night’s loss at Triton Ballpark closed out the Tritons’ bid for the CCAA regular-season title, but with the second postseason seed, UCSD remains competitive for the league championship in Stockton, California. UCSD finishes the season 32–17 overall and 27–13 in the CCAA.

UCSD lost the series opener in Los Angeles, 3–2, after standout junior right-handed pitcher Justin Donatella (8–2) started the first frame by giving up four singles in a row. Donatella worked out of the funk in subsequent frames and ultimately kept his banner year intact with a CCAA-best 0.86 ERA.

“Early in that first inning, he was making mistakes with two-strike counts,” UCSD Head Coach Eric Newman told the UCSD Athletics Department. “He left balls up out over the plate. He wasn’t as sharp yet. [Cal State Los Angeles] did what you’re supposed to do, and they got some hits. That’s baseball. You never know when the inning’s going to come. You like the fact that, if it happens early, at least you have some game to try to get back in it.”

The Tritons capitalized on some fielding errors by the Golden Eagles but failed to overcome the three runs given up early in the game.

Friday’s follow-up at Reeder Field in LA saw the Triton offense surge behind a strong performance from senior left-handed pitcher Trevor Scott (7–5). Scott allowed seven hits on seven frames, but only one of those turned into a run in the 6–1 victory. The southpaw also struck out eight, including four in a row.

“It was a really good night,” Scott told the UCSD Athletics Department. “The first time through the order, they hadn’t figured out my change-up, so I was going to that quite a bit. My slider was on today, and my fastball had a lot of movement and had a lot of late life on it. I felt like I was able to neutralize their offense a little bit, especially early in the game. As it got later, I had to start pitching a little bit more. … I got some double plays. I had a lot of strikeouts tonight, so it was definitely fun for me.”

Saturday’s Senior Day doubleheader saw UCSD win 7–4 in the day’s first game but fall 3–2 in a seven-inning nightcap. The last game loss to the Golden Eagles helped No. 18 Cal Poly Pomona secure the regular season CCAA title, but the Tritons will still move into the postseason in possession of the second seed.

UCSD baseball will look to defend the title acquired last year when the team faces Cal State Monterey Bay on Thursday at 7 p.m. in Stockton before eventually advancing to face the winner of first-seed Cal Poly Pomona’s contest against fourth-seed Cal State Dominguez Hills on Friday.