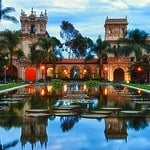 Last weekend, I trekked over to Balboa Park with a few old friends to recreate pictures and memories of a day trip we had taken together freshman year. We had lost touch numerous quarters ago and sought to bask in nostalgia for old times’ sake.

To say a lot had changed over the past four years would be an understatement. One friend came out to his parents and suffered through a major depressive episode; another gained self-esteem by losing over 50 pounds and discovering love in a boy with a cheeky grin. The wild child managed to escape a debilitating lifestyle of unrestrained hedonism, while the Scrappy-Doo of the group overcame her “keeping up with the Joneses” attitude to develop her own individuality. Majors changed; career paths changed more.

On the surface, we very much appeared to epitomize the jolly togetherness of the Traveling Pants folks, giggling like tickled middle schoolers and striking poses to match those we had taken years ago with my now embarrassingly low-megapixel camera.

However, the differences between us were palpable and difficult to ignore. One friend had what could best be described as an existential crisis during our sophomore year, withdrawing from all social contact and later emerging with a radically altered personality. It was impossible for some of us to see eye-to-eye with each other on anything, even decisions as insignificant as which vendor to stop at for lunch. Physically, we were different as well. That 18-year-old enthusiasm that had previously allowed us to endure a three-hour adventure in taking buses, hopping on trolleys and crossing freeways simply to make it downtown had long ago dissipated and had been replaced by First World complaints of how long the car ride was.

So much had transpired in the intervening time between our previous trip and now it was futile to even attempt to catch up to speed with each other; instead, we collectively succumbed to a quiet resignation that we were each now fundamentally dissimilar people. An anticipated full day event was shortened to only a few hours because we were all too jaded to continue the facade of enjoying each other’s presence.

The notion of time being slippery became very real to me at that moment. The interval between freshman orientation and graduation seemed to have passed quicker than a Vine, but it made a world of difference because none of us were even close to being the same people we were four years ago. The contrast between each of our current circles of friends reflects this divergence of interests, as people tend to phase out those with whom they have few commonalities with.

When friends become removed from each other and mature separately, differences are bound to surface and strain relationships. Even after acknowledging this, I was still taken aback at these intangible deaths that had crept up so silently. I miss what we had at one time and what — despite our newly acquired wealth of cheesy photos — we’ll never quite have again.