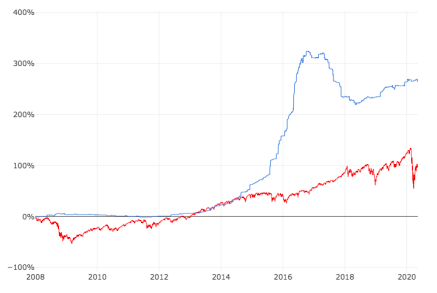 Trading cards have been an exciting hobby for sports fans since the golden era of card collecting began back in the 1940s. Over the course of the past decade, however, we have seen the industry and market rapidly evolve and skyrocket in both popularity and value. In fact, the PWCC Market Index, which records the investment performance of top graded cards on the market, has grown at roughly 2.5 times the rate of the S&P 500 since 2008.

This growth is clearly intriguing and can be attributed to various reasons. Before we get into those, here’s some background for those not so familiar with the card industry.

Today, there are hundreds of brands, series, and genres of cards all of which are valued differently based on primarily rarity, condition, population, and visual appeal.

Rarity and population deals with how many cards are in circulation. There are standard base cards which are fairly common to acquire; however, there also are short print cards which can be numbered out of a small amount such as 100, or even 1. Rookie cards are also valued more than players’ future cards because this is their first card to hit the market and will only be printed and put in packs for a single year.

When it comes to condition, there are a handful of card grading companies that grade cards on a scale of 1-10 with 1 being the lowest, and 10 being the highest. Professional Sports Authenticator is the consensus leader in the industry today, but Beckett Grading Services and SGC are also quite reputable.

Grading is based on four categories: centering, corners, edges, and surface. For example, a Luka Doncic rookie card with 10 PSA would be Doncic’s most expensive card given it has the highest possible grade and is a rookie card.

Is it safe to say that the trading card market will continue to grow? I’d argue yes, especially because one of the reasons behind this prolonged market explosion is the simultaneous growth of sports betting. As betting has become more commonplace over the past few years, an increasing number of people are breaking into the industry and investing in trading cards is just another outlet to do so.

For example, instead of placing a bet on rookie of the year or MVP, you could simply buy one or a few graded rookie cards of that player. In 2017, Patrick Mahomes’ rookie year, a Mahomes Donruss PSA 10 rookie card sold for roughly $80 to $100. Today, that same card is selling for upwards of $1000. By speculating on which rookies could make it big within the next few seasons, one can “gamble” just like they could on DraftKings or FanDuel, but with potentially less risk and a higher reward.

There is less risk inherent to card collecting relative to gambling because if the player doesn’t pan out as the buyer wished, the card still holds value and can be sold at a lesser price whereas a losing bet provides no return.

In addition, people can buy card packs and hope they pull a high priced card. Who doesn’t love ripping open a $10 pack for a shot at pulling a thousand dollar card? That is part of the thrill of the hobby.

Another good reason to believe that this market will continue to grow is because unlike stocks, buyers can have emotional attachments to players and teams. Most people grew up idolizing a certain player and would happily invest in, say a Kobe Bryant card because not only does it accrue value overtime, but it’ll also remind you of his staggering five championships and your childhood memories where you tried your best to model your turnaround jumper just like him.

Equally important to this emotional attachment is that today’s card marketplace has no barriers to entry, unlike the vastly complicated stock market. People at all levels of collecting, whether they’re collecting for fun or as big-time investors, can buy and sell with ease by way of platforms like eBay.

Auctions on eBay offer ungraded cards for prices as cheap as a dollar as well as perfect graded cards that sell for thousands of dollars. Furthermore, eBay and other online marketplaces, such as StockX, provide an even more lucrative opportunity for buyers as cards are very liquid. Consumers can buy and sell cards with the click of a button and receive their money within days.

To summarize, I think that the emotional attachment card collecting provides sports fans, along with the relatively risk-free and low-information path to making money when compared to sports gambling and stock exchanges, explains the proliferation of the card market.

And there is no reason to believe this growth is stopping here; hobbies are the foundations upon which new marketplaces are built. When Steve Jobs and Steve Wozniak first began working on computers in the early 1970s, they did it as a hobby as the first Apple computer sold mainly to hobbyists and computer junkies. It was not until later on when they realized they may have a serious product that could give rise to a totally new market, and it’s safe to say this hobby is just getting started.

With growth trending upwards for over a decade, online marketplaces making it easy for all levels of investors to collect, and having the opportunity to invest in something that interests investors, the trading card industry is one of the most fascinating markets out there. Whether you are an investor or sports enthusiast, the trading card market has a spot for you.

One thought on “The Rise of the Sports Trading Card Market”