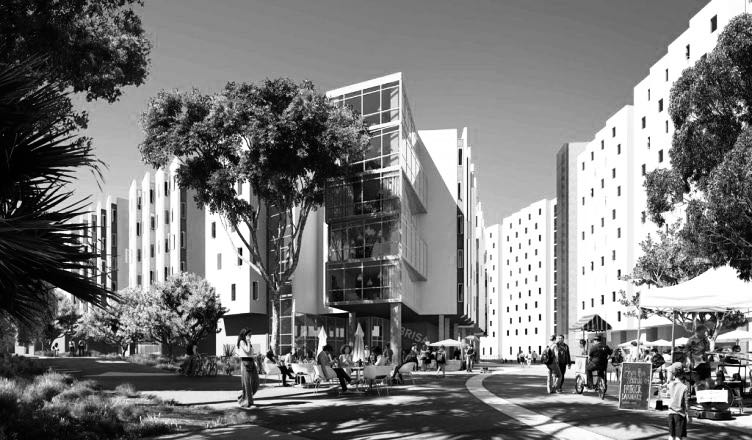 This article is a part of our news series on the COVID-19 pandemic. For information on how to prevent the spread of the virus, click here.

Sam Mitchell, a UC San Diego Ph.D. candidate and former resident of the Nuevo West Viento building, alleged that his building was being used as isolation housing for students returning from study abroad and those who may have come into contact with the virus as early as March 13. A general notice for the university’s intention to utilize on campus housing for student isolation was made in March, and is separate from the university’s announcement of its intention to lease a separate Nuevo East building to the county for potential patient isolation.

An anonymous student confirmed with the UCSD Guardian at 1:20 p.m. on April 6 that they were housed in the Viento building from March 13 through the 17 while they awaited the results of their COVID-19 test from Student Health Services.

“My child was in there,” Mitchell said in an interview with the Guardian. “We had bought a bunch of groceries and planned on doing the whole isolation thing … but my parental instincts said that he couldn’t stay there anymore.”

According to Mitchell, the university worked with Housing Dining Hospitality and the San Diego Police Department to move students into vacant apartments in the Viento building alongside current residents as early as March 13.

Mitchell made numerous attempts to reach out to both HDH, Student Health Services, and university officials for concrete answers as to what was going on and what would be done to protect current student residents in the building.

He claimed that those he were able to get in contact with told him that the decision to house patients alongside residents would not put anyone’s health at risk and that he had nothing to worry about. One dean reportedly told him that the university’s priority was to protect the privacy of the patients, but gave no help in regards to current residents’ health.

“They were caught up in a lie already,” Mitchell said. “It seemed like they had planned this all along.”

As a result of the decision to use the building for patient isolation, Mitchell had no permanent place to live in San Diego, so he packed up his belongings with his partner and son and made the approximately 2,000-mile drive to his former home in Minneapolis while school was still in session. Mitchell said he even had to teach sections while driving through Arizona and Kansas.

Mitchell said that he has filed a grievance with the United Auto Workers union in regards to the situation, and will file a class-action lawsuit against the university if enough Viento residents agree to do so as well. Otherwise, Mitchell will try to reach a settlement with the university for damages on his own.

Mitchell stated that the university has yet to offer him and his family any compensation or apology for the incident.

Graduate Student Association President Rachel Flanagan spoke to the Guardian about how the organization has been working to address the allegations.

“The GSA received multiple reports from students concerned about HDH utilizing on-campus Graduate and Family Housing units for quarantining possible COVID-19 patients,” Flanagan said. “We know that a small number of units in the new development of Nuevo West were marked for the use by and in partnership with UC San Diego Health; no one anticipated their first use would be for quarantining students. The GSA continues to pressure HDH and senior campus leadership to better communicate with students, especially on issues that directly impact their lives.”

The university responded to the Guardian to address that the reason the initial announcement of on campus student isolation housing did not include the intended location was due to student privacy concerns.

“To maintain confidentiality, and to be compliant with federal law (see Notice of Privacy Practices at https://wellness.ucsd.edu/studenthealth/about/HIPAA/Pages/default.aspx), we are not identifying isolated students nor their locations,” the April 1 announcement read.

Housing Dining Hospitality had offered graduate housing residents the ability to cancel their rental agreements without penalty and a prorated reimbursement if they did so by March 29, 2020. However, the decision to use a Nuevo East building, which is composed entirely of graduate student and family housing, was announced three days after the no penalty cancellation date. The Nuevo East building will not house any student residents.

This article was updated to clarify the difference between Nuevo West and Nuevo East at 1pm.

This article was updated at 1:20pm to include that a student has reached out to the Guardian to confirm that they were housed in the Viento building while awaiting COVID-19 test results from March 13-17.

This article was updated at 2pm to address that the university did in fact make a general announcement about its intention to house students in isolation for COVID-19 in March, although the location was not given due to privacy concerns.

This article was updated at 2:40pm to clarify that the Nuevo East building leased by the County will not house student residents.

This article was updated at 9pm to include a statement from Graduate Student President Rachel Flanagan.