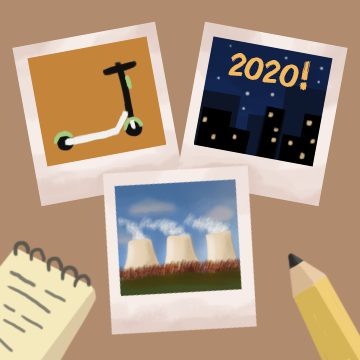 Neighborhood Notes is a compilation of short blurbs on what’s happening on campus and throughout the San Diego area.

San Diego has been named the number one city in the United States for keeping New Year’s resolutions, according to a survey conducted by Wallethub. The survey evaluated the most popular resolutions, such as weight loss and reducing stress, and summarized them into 57 key metrics including gyms per capita, employment outlook, and income growth.

The rankings of 182 U.S. cities were determined by the total number of points earned from each metric. Wallethub categorized the metrics into five key dimensions. Among them, San Diego ranked first on the health resolution, second on relationships resolution, 27th on school and work resolution, 33rd on bad habit resolution, and 81st on financial resolution. The top three cities for 2020 are San Diego, Scottsdale, Arizona, and San Francisco, California.

After San Diego County banned the use of electric scooters on the boardwalks at Mission Beach, Pacific Beach, La Jolla Shores, and the Mission Bay Park Bayside Walk last December in response to safety concerns, Lime announced an end to its partnership with San Diego. The company is currently in the process of removing its 4,500 e-scooters, as well as closing down its warehouse in Old Town.

Since summer 2019, the San Diego City Council has placed a scooter speed limit and restrictions on where scooters can be parked, along with granting city officials the right to impound devices. According to the San Diego Union-Tribune, Lime and other scooter and bike companies have complained about the lack of transparency of the impounding policies for having to pay fines without knowing the specific reason as to why their products were impounded. The present regulations on scooters was a main reason for Lime pulling out of the city.

Lime had been partnered with San Diego since February 2018 and made the city one of the first to offer both dockless bikes and scooters. The largest remaining scooter companies in San Diego now include Bird, Spin, and Lyft.

UC San Diego environmental scientist Jennifer Burney found that the U.S. transition from coal to natural gas as a primary energy source has saved approximately 26,610 lives and 570 million bushels of crops including corn, soybeans, and wheat between 2005 and 2016. According to her study published in Nature Sustainability on Jan. 6, 2020, coal burning generates particulate matter and ozone in the lower levels of the atmosphere, which causes human health problems and localized climate change.

“We hear a lot about the overall greenhouse gas and economic impacts of the transition the U.S. has undergone in shifting from coal towards natural gas, but the smaller-scale decisions that make up this larger trend have really important local consequences,” Burney said to UC San Diego News Center.

The inverse calculation suggested the damage caused by coal-fired units which were to continue operating over the same period of time could lead to 329,417 premature deaths and the loss of 10.2 billion bushels of crops, equivalent to about half of the typical annual production nationwide.

Graphic by Allyson Llacuna for the UCSD Guardian.