Those experiencing such issues have voiced their frustrations, using the popular discussion website Reddit. Over 30 threads have been made since the beginning of the school year to complain about the quality of the Wi-Fi.

James Seddon, the enterprise network operations manager of ITS at UCSD, spoke to the Guardian about the Wi-Fi quality issue and why it has been particularly major this fall.

“There was a combination of three back-end issues that hasn’t occurred in previous years,” Seddon said. “The Wi-Fi service this fall has not lived up to our expectations, nor provided what our customers need.”

The three back-end issues that Seddon brought up were a major problem with the back-end Wi-Fi hardware that serves half the campus. Authentication servers were overloaded due to the increased number of devices, from 45,000 to 60,000 in just the last three years, attempting to log in.  There was also an intermittent routing problem that disallowed devices from getting the Wi-Fi address, preventing users from connecting to the network at all.

Nonetheless, Seddon said that all the problems listed above were considered resolved by the end of last month by the staff team. 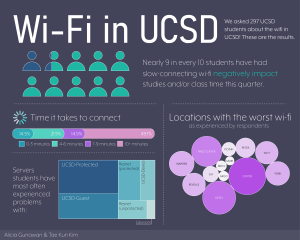 “The number of service desk complaints have dropped by about 75 percent  since peak times in October,” he said.

Despite the improvements to the Wi-Fi system, many students have continued to experience Wi-Fi quality issues. According to Seddon, high student density in small areas is the number one culprit for the continuing issue.

“It’s not a coverage issue — it’s a capacity issue,” Seddon said. “Places like big lecture halls, Geisel Library, and Price Center are difficult to manage because they’re so populated. The more devices that are connected to an access point, the less bandwidth for each device to use.”

Between Fall 2016 and Fall 2019, 1,282 new Wi-Fi access points have been made available throughout campus, bringing the current total number to 7,290. Additionally, Seddon said that older access points have also been prioritized with being replaced.

Pedro Cruz, the enterprise director for network at UCSD, spoke to the Guardian about prospective projects that could potentially fix the problem.

“We are working on developing an app that allows users to press a button to report Wi-Fi problems so that the ITS can get data on where people are encountering the most problems,” Cruz said. “We are also trying to make a map to show where Wi-Fi is so that people are more aware of where they should get an Internet connection.”

While the aforementioned poll results indicate that the majority of users have had issues with the Wi-Fi network UCSD-PROTECTED, fewer had problems with UCSD-GUEST or eduroam. Seddon said that the two networks were spared from the back-end issues suffered by UCSD-PROTECTED this fall. By addressing the three problems, UCSD ITS hopes that all networks sharing the same hardware, bandwidth, and coverage will have similar Wi-Fi performances.

ITS has stated that they plan to continue to improve Wi-Fi access for everyone at UCSD. Students with persistent issues are encouraged to email [email protected] if they need assistance and to report the problem.