Features Editor Lara Sanli gives a personal account of her time in Washington, DC, where she waited outside of Congress in hopes of attending Mueller’s testimony. Her adventure unfolded as follows.

On Wednesday, July 25, Former Special Counsel for the United States Department of Justice Robert Mueller testified before Congress. I am currently in Washington, D.C. through the UCDC internship program, and because Mueller’s hearing promised to make history, I made it my mission to do whatever I possibly could to attend his testimony. The day before this hearing, I convinced one of my fellow interns, who is also in Washington, D.C. through a similar program offered by the University of Michigan, to join me in trying to attend the hearing. We spent the night before camped outside of the congressional office building for the U.S. House of Representatives in hopes of getting one of the courtroom’s limited seats available to members of the public. It ended up being more of an adventure than either of us anticipated.

Mueller is famous for his “Report on the Investigation into Russian Interference in the 2016 Presidential Election” which is colloquially known as the “Mueller Report.” As the title suggests, the report investigates collusion and conspiracy between President Donald Trump and Russia, Russia’s involvement in the 2016 election, and accusations that Trump obstructed justice. The redacted 448-page report (available to read in full here) concluded that Russia interfered in the 2016 election — but also found no definite evidence of Trump colluding with Russia to win. It did not reach a conclusion on whether or not Trump obstructed justice.

We didn’t sleep at all. At midnight, we walked from our respective apartments to meet in front of the White House, where we called a Lyft to Capitol Hill. Our driver told us about his days as a mail delivery boy for the Senate, and recounted a time he was paid $500 to stand in line for a Congressional hearing on behalf of someone else.

I asked my co-intern if she would consider giving her spot in the Mueller line to someone else, if they paid her $500, or even more. “No way,” she said. “This is history. I want to witness it in person… and I also want to get on the news.”

The driver dropped us off at the Rayburn House Office Building. Capitol Security promptly told us that we had to be at least one block away from Capitol property until it formally opened at 7 a.m. or else we would be arrested for trespassing and loitering. So we joined the only other people there, two students from Williams College, making laps around the building and looking for the line — but we couldn’t find one. At 1 a.m., we started the official line ourselves. Mueller’s testimony was slated for 8:30 a.m.

Within half an hour, others began to join us in line.  They mostly consisted of curious lawyers and other college students wearing suits. Clearly veterans of this sort of thing, they brought their own picnic blankets and camp chairs to sit on, and sipped from their coffees as they rotated between scrolling through their Twitter feeds and flipping through hard copies of The Washington Post.

Some of the lawyers were discussing why they found the hearing significant. Both Democrats and Republicans, they said, were eagerly anticipating ways to profit from the hearing regardless of how it would unfold. Democrats were hoping for a clearer way to charge Trump with obstruction, which could possibly help initiate impeachment proceedings, and Republicans were hoping to call attention to the unfairness of an investigation against the president, while also hoping that nothing would change.

I turned my attention away from the lawyers as I munched on Cheerios, and started eavesdropping on the University of Chicago students next to me, who were fondly reminiscing their high school proms. Weirdly enough, time passed quickly. There were probably at least one hundred people standing in line behind me, ready to fight for one of the coveted spots in Rayburn 2141, but everything seemed oddly normal.

At 6 a.m., security came over to our line. “If you’re an intern for Congress, you can enter Longworth and take the underground tunnel to Rayburn. Just show us your yellow ID.”

Four college-aged capitol interns (“Hillterns,” as they are informally called in Washington, D.C.) sprinted to the building across the street, pushing and shoving to get to the door. One girl in heels beat the others and they all disappeared through the door out of sight.

People in the line were grumbling. The day before, when I had called the House Clerk’s office to inquire about the line, the woman on the phone told me that Rayburn 2141 has a total of 100 seats. Approximately 50 of them would go to members of Congress and to the witness’ family, and the rest to the press and the members of the public. If there were at best 50 seats available to the public, what would happen if the hillterns took all of them and there was nothing left for the actual public?

“I know a Hilltern inside,” the Williams College student next to me said. “Look at this snapchat he just sent — the line is only hillterns, and it goes down the whole hall. You can’t even see the end.”

Media and Congressional staff started their own line to enter the building. Our line began inching toward the door and people tried to peer in, even though there was nothing to see other than gold-rimmed security check and glamorous marble floors. 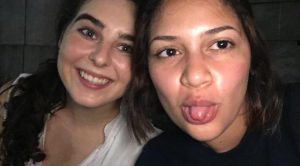 “Sorry, Congressman,” security said to an important looking man in a navy suit who was trying, with little success, to pass through our barrier of a line and approach the door. He then turned to the crowd. “Clear the door, guys! He’s trying to get through.”

The sun came up; the sky turned blue. The crowd’s chatter gradually grew louder. The number of hillterns arriving exponentially increased. Every time one of them passed, the University of Chicago girl grimaced.

A reporter came up to my new friend from Williams College. “I’m with The Washington Post. Can I ask you some questions? Where are you from? How does it feel to be the first person in line?”

To everyone’s surprise, just before 7:30 a.m, the doors at Rayburn, all the way across the street, opened a few minutes early.

“Just go to Rayburn!” security shouted. “It just opened and you won’t have to take these tunnels or wait for media to check in. There’s no line!”

It was an absolute anarchy. All civility — and the line — were abandoned as grown adults in suits started sprinting across the street. Elbows were up, people were shoving each other. I couldn’t even move — I have never seen anything like it in my life. The adults somehow passed most of the college students. It was such an absurd sight that it looked straight out of a movie.

The remaining crowd, including my shell-shocked self, stayed at Longworth. We eventually passed Longworth security and took the underground tunnel to Rayburn. Once we got to the second floor, my co-intern and I followed the sound of voices to room 2141. We passed the long row of news cameras set up to capture Mueller directly by the door. Their bright lights were blinding and emanated a strong heat, but no one took their formal jackets off.

At this point, it was a lost cause. The new line to get into the hearing room stretched from one end of Rayburn to the other — it took a solid two minutes to walk from the beginning to the end. Random people kept walking by, holding up their phone cameras to film the sheer spectacle that was the line. Everyone appeared equally surprised by the number of people willing to stand in suits and heels for hours on end, even when there was little to no chance of actually getting in. There was something about standing just two walls from where Mueller was testifying that made the failed experience worth it. For some, it was the physical proximity to power; for others, the ability to say they played a role in history. For me, it was the opportunity to get closer to a political process that typically seems inaccessible and larger than life.

I was confused by the paradoxical disconnect between the larger-than-life framing of the whole ordeal and the normality of it. A guy on the camera crew zoned out as he filmed an interview, a journalist took off her heels, a girl in line swiped through Tinder. Non-hilltern interns made small talk about their office’s last happy hour. A Congressional clerk pulled out his airpods to politely ask members of the line blocking access to his representative’s door to step aside. A group of moms walked by wearing “Moms Against Vaping” t-shirts, a group of interns started talking about the flavors of their juul pods. As I attempted to count the number of people ahead of me, I ran into a girl I went to high school with and we scheduled a coffee meet-up that we both knew would never happen.

After 8:30 a.m. came and went, we realized we weren’t getting in. The hearing had started.

“Wanna get coffee before we go to work?” my co-intern asked.

We stopped in the bathroom to document the occasion with a mirror selfie and then started wandering around the building. Fifteen minutes later, we still hadn’t found an exit.

“Is there no way out of here?” I asked, as we came upon the intersection of four hallways. I walked directly into the center and made a 360-degree turn, looking for any exit sign. My co-intern suddenly grabbed my arm and pulled me out of the middle.

A tall blonde lady in pink heels walked by, followed by a group of four people walking slightly behind her. After Betsy DeVos and her flank turned the corner, we resumed our walk down the winding hallways.

“I had no clue she was that tall!” my co-worker said, as we continued our search for an exit. “But I really don’t like her — she’s against a law helping minority students, plus all the Title IX stuff, and her budget cuts… ”

“We’re gonna be late to work,” my co-worker said.

One thought on “The Guardian in DC: Ten Hours Waiting for the Mueller Hearing”