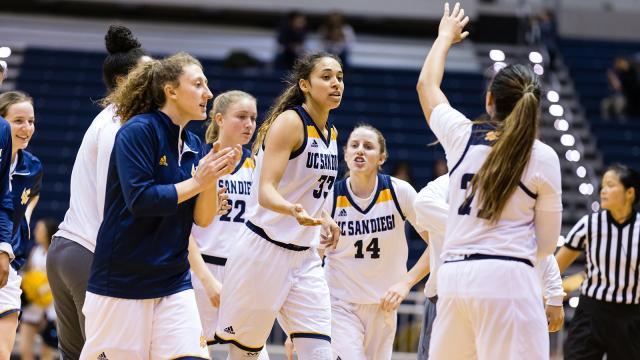 It’s been a historic regular season, but they’re not done yet. The UC San Diego women’s basketball team took down the California State University, East Bay Pioneers 77–69 at RIMAC Arena on Saturday, March 2 to finish its regular season undefeated. The Tritons’ perfect California Collegiate Athletic Association record has not been matched since the 1991-92 season by California State Polytechnic University Pomona, and more notably, no CCAA team has ever finished its entire regular season without a loss.

In the win against the Pioneers, the Tritons jumped out to a 27–9 lead built off of their 50 percent shooting from both the field and from 3-point range. While the home team would slow down offensively as the game progressed, to the point of being outscored 27–17 in the fourth quarter, UCSD was never really under threat of losing the lead. Part of the problem in the second half for the Tritons was their underwhelming shooting, as they went from shooting 50 percent to finishing the game going just 9–26 from deep.

But even without their usual sharpshooting, the team’s scoring leader on the night and on the season, junior forward Mikayla Williams, did not attempt a single 3-pointer. She led UCSD with 20 points against CSU East Bay. Williams led the team on defense as well, adding 5 blocks and 2 steals to her solid final line.

On the season, Williams led the team in minutes played, shots made and attempted, and field goal percentage, as she was the only player to shoot over 50 percent from the field. In addition, her 46 blocks led the team by more than 30 over the next closest player.

Williams will be essential to keeping the Tritons’ offense afloat during the playoffs if for whatever reason the 3-pointers don’t find the bottom of the net.

But of course, this team is built on threes. Junior forward Haleigh Hatfield and junior guard Sydney Sharp have been the team’s most consistent shooters from behind the arc. Against the Pioneers, the pair shot a combined 4–12 from the 3-point range; however, they may need to improve in the playoffs when the Tritons begin to take on tougher opponents.

The team will be the No. 1 seed in the playoffs, and its first game will be on Tuesday, March 5 against the No. 8 seed, the California State University, San Francisco Gators, at 5:30 p.m. at RIMAC Arena.

One thought on “Women’s Basketball Rewrites History with Weekend Win”