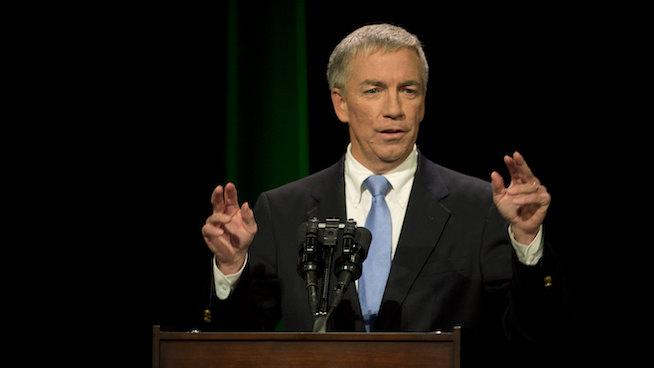 Former Sacramento Congressman Doug Ose is returning to politics after over a decade, throwing his hat in the ring for governor of California. He’s running on the Republican ticket and announced his candidacy about a week ago.

Ose graduated from UC Berkeley in 1977, and shortly after, started his own business in real estate development and investment. After 20 years in business, he ran for a seat in the House of Representatives in 1997. He served three consecutive terms before stepping down in 2005.

On Feb. 12, Ose stopped by the UCSD Guardian office for an interview. We asked him about what he hopes to deliver and how he would oversee the UC system as governor.

“It just seems like common sense, you know?” Ose said about issues like water, homelessness, and the economy. “Can’t we just get someone to fix this stuff? Can’t we have someone buckle down and get it fixed before they rush off to the next ‘issue of the day?’ That’s why I’m running.”

The Guardian asked him about his sponsoring of President Donald Trump during the 2016 election. He had supported him after Jeb Bush dropped out of the race.

“I was a strong supporter of Trump,” Ose stated. “I signed on in February of 2016, and I did it for a very specific reason. And that was: From my experience, which is different than probably most of your readers, but from my experience, Washington is broken. We could argue about the merits of the president’s tweets and his language and what have you, but he certainly is not same-old, same-old that we’ve had for the last 25 years.”

He said that as a Republican, he didn’t feel he had to change anything about his political character under the Trump presidency.

During the discussion the UC system, Ose was asked about the UC Board of Regents considering raising tuition again in the spring after failing to receive the amount of funding for the UC system in the 2018-19 California budget that they desired. This was his stance:

“I don’t believe college should be free. I think if you give something away, it undermines its intrinsic value,” Ose told the Guardian. “If every young person who is a freshman in high school knew that they could get into any college for free, they receive the message that they don’t have to work very hard to get into college.”

“What I’m more concerned about is getting away from a merit-based admissions policy into something that is a more ‘politically correct’ substitute,” he said. “I don’t think that’s what the UC system was designed to do. The UC system, in my mind, was to provide a place where our best and our brightest, regardless of ethnic or racial background, just simply our best and our brightest could go to get add-on skills that would drive the economy for the next generation.”

Ose told the Guardian that if the university didn’t change, he would cut the budget for the system. “I’m not going to, as governor, allow this person who has a social agenda to undermine the progress we need in all different sectors of the economy.”

Then, he commented about the audit revealing millions of undisclosed funds in the UC president’s accounts.

“I am terribly troubled at the ability of the UC system to squirrel away a hundred-odd million dollars for the discretionary use of the chancellor without any accountability,” Ose stated. “Before we start raising tuitions, in order to pay higher salaries to members of the academic senate and alike, maybe we ought to figure out what we’ve got in hand today, stop squirreling it away in these secret accounts.”

When asked about the Regents’ recent lawsuit against the Department of Homeland Security contesting the rescinding of the Deferred Action for Childhood Arrivals program, Ose said that he had recently participated in an education forum. During his preparation for it, he constructed a page of recommendations for Congress regarding how to reform the program.

“One of those things had to do with creating an adjudicatory process, some sort of an administrative hearing process based on what Congress does, that allows these young people who are here under the DACA program to have their cases resolved,” Ose said. “Some of those kids, frankly, have engaged in stuff that we don’t want. We need to figure out who they are, and take them to the border, and show them the door. Other kids, we need to set standards, which Congress needs to set.”

California’s gubernatorial primary election is on June 5, and Doug Ose is currently one of six declared Republicans in the race. Readers can see the full transcript of the interview online where he discusses his stances on climate change, infrastructure, and more.