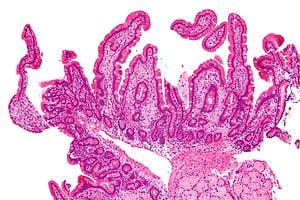 Whipple disease is a rare bacterial infection that most commonly affects your gastrointestinal system but can also affect other parts of the body such as the eyes, heart, brain, joints, and lungs. The disease impairs the body’s breakdown of fats and carbohydrates and the absorption of nutrients into your body, as well as possible malfunctions of the immune system. It can be be cured if diagnosed and treated properly, but can be fatal if left untreated.

Whipple disease is caused by the bacteria Tropheryma whipplei. The bacteria seem to be common in soil and water, and many cases reported are of patients who work with soil in fields such as agriculture and construction. The disease is also more common in individuals that have the HLA-B27 antigen, which may suggest a genetic predisposition in people with the disease. The bacteria works by initially affecting the mucosal lining of the small intestine and creating small lesions in the intestinal wall, as well as damaging the villi (small, hair like projections) lining the small intestine which help increase the surface area for absorption of nutrients.

Symptoms of Whipple disease include diarrhea, unusual weight loss from malabsorption, abdominal cramps, weakness, fatigue, anemia, and inflamed joints. Other less frequently observed signs include fever, cough, chest pain, darkening of the skin (hyperpigmentation) in scars and areas exposed to sun, enlarged lymph nodes, and an enlarged spleen. Possible neurological signs of the disease are visual impairment, lack of control over eye movement, memory loss, confusion, and difficulty walking. The symptoms for Whipple disease typically develop slowly over a span of years, and other signs can be present for some time before development of gastrointestinal symptoms that would lead to diagnosis.

Treatment for Whipple disease is a course of antibiotics, the first option usually being ceftriaxone 2g or penicillin G given intravenously. Fluids and electrolytes can be added in for more serious cases of the disease. Patients being treated are advised to be closely monitored because relapse is fairly common after symptoms have disappeared for some time. It can take the intestines around two years to fully recover from the bacterial infection and patients often remain under monitoring past successful treatment.