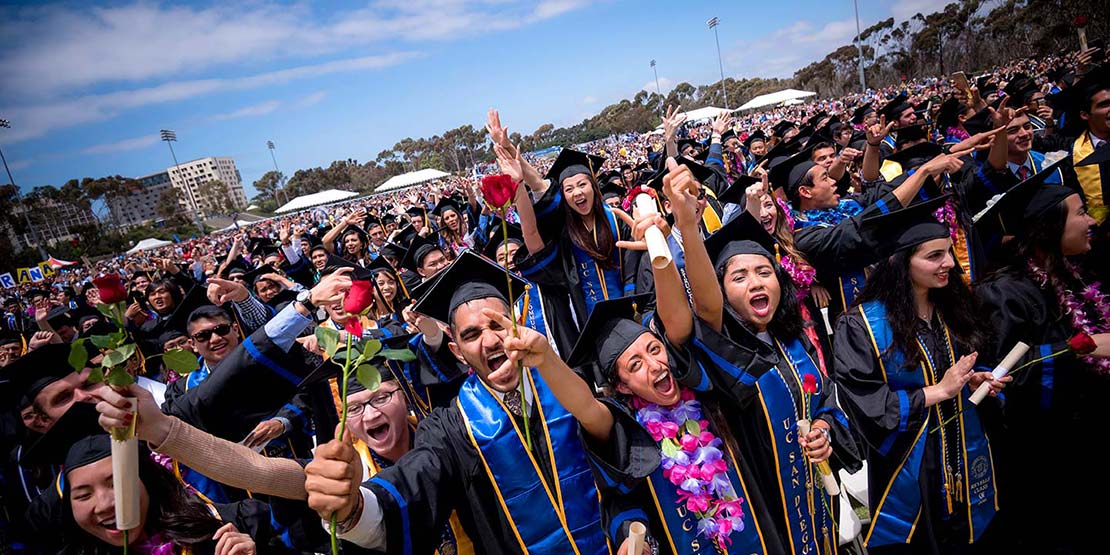 In just 12 days, I will be joining my peers in the class of 2017 as we walk across RIMAC field and earn our degrees. Four years of hard work, late nights and exorbitant amounts of coffee have accumulated in a moment of pure happiness. I, like many other graduates, meet my commencement with mixed emotions, excited for my future beyond UC San Diego while equally terrified of the idea of being a “real adult.” Participating in the final graduating activities — picking up caps and gowns, attending Grad Nite, taking graduation photos — makes the wait until that final moment even sweeter. However, despite this being the class of 2017’s shining moment, the upcoming graduation has been overshadowed by the university’s decision over our commencement speaker, the fourteenth Dalai Lama. The university’s announcement in February has been met with mixed emotions from the graduating class. While some students are honored that His Holiness will be giving our final commencement address, others are outraged over the choice. This begs the question, should graduates be given a choice when it comes to selecting our own commencement speakers?

Various factors play a role in how commencement speakers are chosen. Some universities attempt to attract big-name guests — whether through large budgets or other means — in an attempt to bring notoriety and publicity. For other schools, finding a speaker that represents the core value of the institution and its students is given top priority. Pepperdine University, for example, emphasizes diversity, taking into account speaker’s race, gender and accomplishments. Still, some schools like Brown University have even attempted to step away from the commencement speaker dilemma by only having students speak at the graduation ceremonies. There is not a good way of quantifying who universities should choose as their commencement speaker; even the most well-thought-out choices can still be met with opposition.

The problem doesn’t lie entirely on who will speak, but on how they are chosen. Although the policies range from university to university, one thing is certain; little input is taken from the students themselves. Excluding students’ suggestions has led to a common sight during the commencement season: a disgruntled student body. Graduates at Bethune-Cookman University booed their commencement speaker, Secretary of Education Betsy DeVos, so loudly that the commencement was cancelled in mid-May. A few days later, over a hundred Notre Dame graduates walked out of their commencement ceremony last week while Vice President Mike Pence was giving his speech. As one of the Notre Dame graduates who walked out mentioned, “Commencement is not a moment for academic exchange or political dialogue. It’s a celebration of all of our hard work.” A commencement ceremony should transcend a political discussion, it should truly be a celebration of the graduates themselves, and giving those honored little to no opportunity to be a part of that process is wrong. Although many have argued that this issue stems from close-minded “snowflake” college graduates who refuse to listen and adhere to differing viewpoints, the real problem lies with universities’ refusal to consult their graduating classes. I don’t have a problem with administrations inviting controversial speakers from either side of the political spectrum to give speeches at the university — just not on my graduation day.

The class of 2017 wasn’t given the ability to provide any recommendations for who it would like hear at the commencement address. Given the expected outrage over having such a controversial speaker, it would have been a smart choice for UCSD’s administration to consult the graduating class before booking the Dalai Lama. Other schools, like Dillard University in New Orleans and Pepperdine University in Malibu, allow their graduates to submit suggestions of who they would like to hear speak. While I personally do not have any grievances towards having His Holiness speak, I can understand the hurt and anger some of my fellow graduates have. And while I cannot measurably understand or communicate the long-standing and complex history regarding the Dalai Lama’s actions and the Chinese people, I think it is important that all graduates feel celebrated and welcome on their commencement day. Like Bethune-Cookman and Notre Dame, it seems as if the UCSD administration failed to see how its choices in commencement speakers could offend the very people they are supposed to be honoring.

It’s important as college graduates that we have an open mind to differing views and opinions, and we should be able to have civilized and respectful debates on all issues. However, these political and social debates do not have to occur on what is so far the biggest day of our lives. Universities across the country including UCSD need to start taking the graduates themselves into consideration when planning major events like commencement; our voices should be heard. These institutions cannot claim that they are celebrating our academic and personal achievements if our input is continuously disregarded and ignored. If the university really wants to honor us, then we should have the right to shape our ceremony to reflect our values and convictions. Regardless of the mixed emotions and reactions to the Dalai Lama’s address, we as the graduating class of 2017 will leave UCSD a little smarter, much poorer and ready to take on the world.