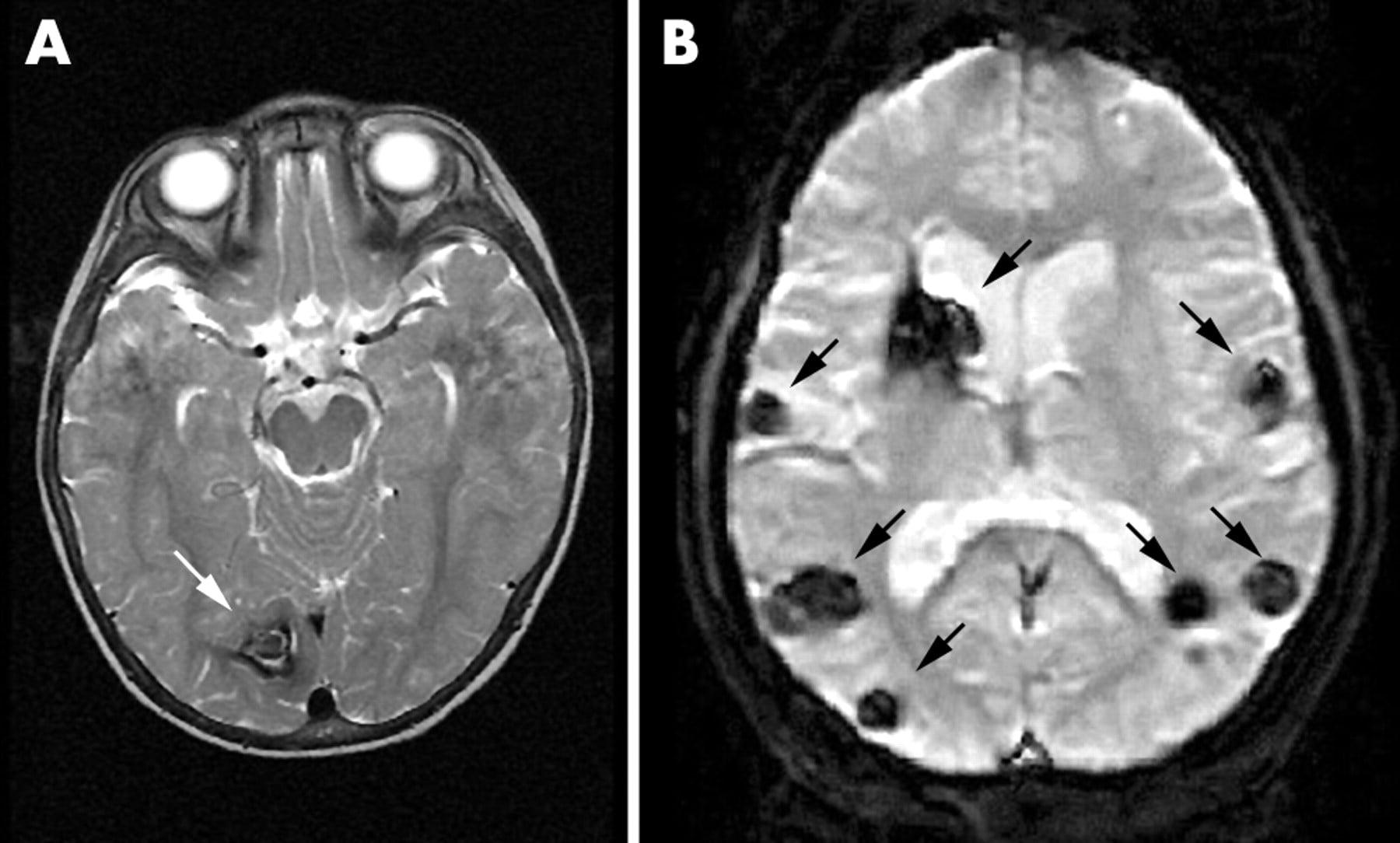 Cerebral cavernous malformations are collections of small blood vessels in the brain that alter blood flow due to enlargement and irregular structure which are typically located in the white matter of the brain. The capillaries that form these irregular structures have abnormally thin, vulnerable walls prone to leaking and are lacking in supportive elastic fibers that make the vessels stretchy. When these thin vessels fill with blood and stretch out, they form “caverns” because the walls cannot spring back into normal shape. Cavernous malformations can occur anywhere in the body but usually only cause symptoms when located in the central nervous system. The condition can occur sporadically or be inherited as a dominant allele from an affected parent where children of one genetically-affected parent have a 50 percent chance of developing CCMs. Sporadic cases will usually only develop one cerebral cavernous malformation whereas familial inheritance cases could show multiple different lesions.

Mutations in the KRIT1, CCM2 and PDCD10 genes can cause cerebral cavernous malformations. These specific genes are thought to interact with each other to strengthen cell interaction and prevent significant leakage from the blood vessels.The malformations can change over time, but they do not have the ability to become cancerous. As many as 25 percent of people with CCMs will never have any medical problems because of their CCMs. People who do show symptoms can experience serious effects including headaches, seizures, muscle weakness, sensation loss, paralysis, brain hemorrhaging and hearing or vision deficits. CCMs have been reported in infants and children, but the majority of cases diagnosed are in adults from ages 20 to 50 years old.

Making diagnoses for a rare disease such as this one can be difficult, so physicians will typically look at symptoms, vitals, family history and various lab tests to make the prognosis. There are approximately 30 clinical tests that can help determine CCM diagnoses. For treatment of seizures, antiepileptic medication will be prescribed. If the medication does not reduce the seizing, there are lesions in an accessible part of the brain or recurring brain hemorrhaging, microsurgical techniques may be the best option of treatment. Depending on the severity of symptoms in each case, most people go into remission with relatively few fatalities caused by continuous hemorrhages.

A study was recently published by Dr. Mark Kahn at University of Pennsylvania’s Perelman School of Medicine linking CCMs to gut bacteria. The study began to understand the development of the blood vessels by using mice as study subjects. A change in laboratory location led to the identification of a new component of defect development in the subject mice that suggested gut bacteria had influence on sporadic development of CCMs. The mice were having a specific gene deleted using injections into their abdomens and some developed abscesses which allowed the bacteria from the gut to move into their blood. Only these mice continued to develop CCMs while the other gene-deleted mice remained normal. The study has identified gram-negative bacteria that carry liposaccharides, large molecules consisting of lipids and polysaccharides,  which can signal veins in the brain to develop bubbles in the blood. Antibiotics that killed these bacteria prevented the development of the defect, and replacing the microbiomes of the mice prevented recurrence. The hope of those conducting the study is that it will eventually be possible to prevent predisposed infants from developing the defect by manipulating their microbiome.