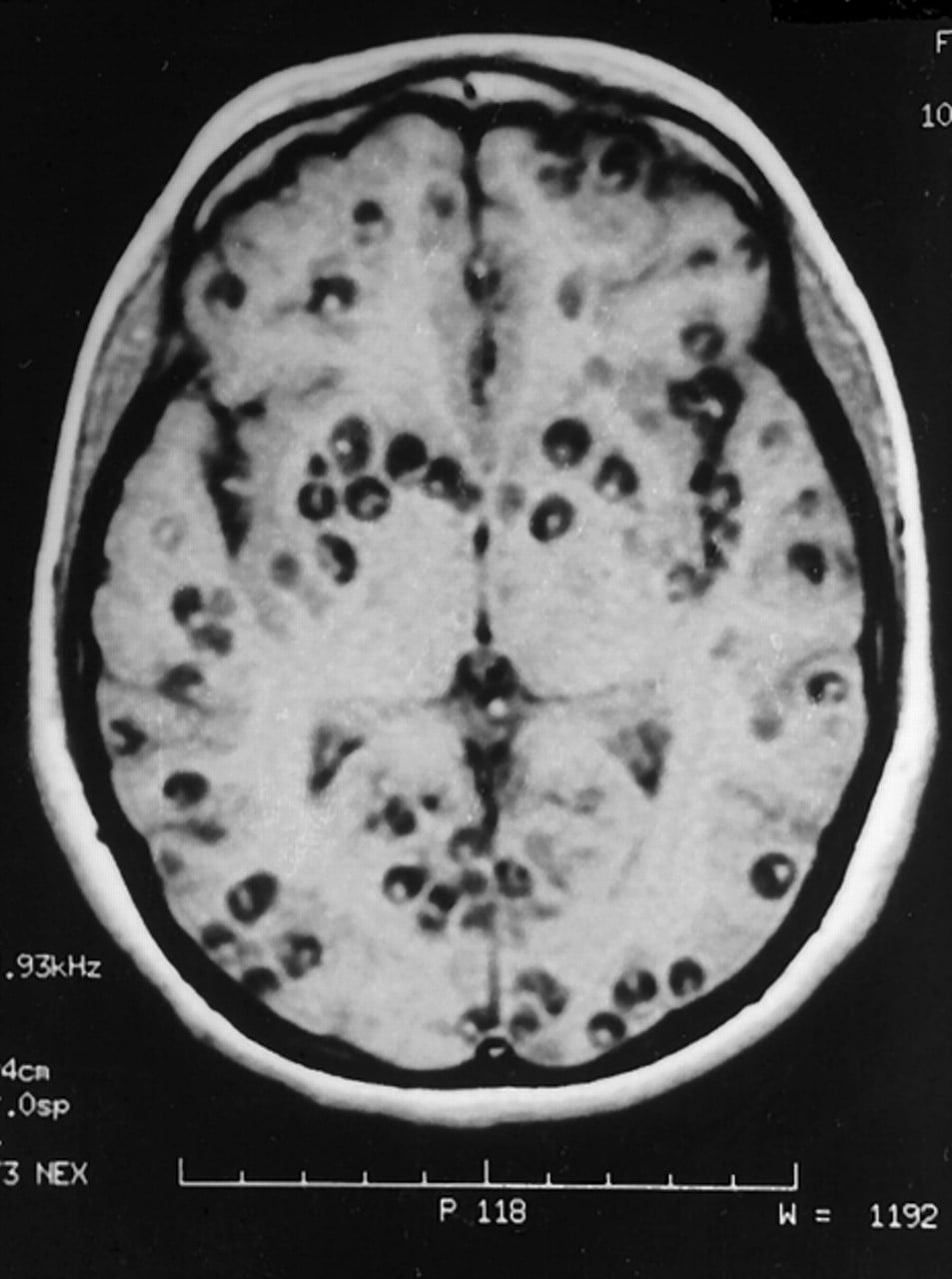 Neurocysticercosis is a parasitic disease in the central nervous system that causes cysts containing parasitic larvae of the pork tapeworm to form in the brain, which affect neural functions, cause seizures, and can be fatal in some cases. According to the U.S. Centers for Disease Control and Prevention, there are about 1,000 hospitalizations every year due to neurocysticercosis in the United States, with the majority of them occurring in California, New Mexico and Texas. The World Health Organization estimates that about five million people worldwide have neurocysticercosis and that 50,000 die from the disease every year. While the presence of the disease has decreased in developed countries due to industrialization and implemented health checks, cases are being diagnosed increasingly in North America, Europe and Australia due to immigration from endemic areas. Neurocysticercosis is estimated to be the cause of 50 percent of acquired epilepsy cases in developing countries and is the most common parasitic nervous system disease in the world.The disease is currently designated by the WHO as a neglected tropical disease.

Neurocysticercosis is caused by the pork tapeworm Taenia solium. Humans can get infected with the parasite by ingesting the parasite’s microscopic eggs spread by someone with an intestinal pork tapeworm or by drinking contaminated water. If someone were to eat undercooked pork that was infected, they would be infected with a tapeworm in their intestines. If they then observed poor hygiene habits and cooked food, the microscopic eggs would be passed from their hands into the food that others would consume. Those consumed eggs become larvae in the body when gastric acid in the stomach degrades their protective covering and then they start to invade the local tissues to form cysts. If the larvae succeed in entering the muscles, eyes and skin, they cause cysticercosis which is cysts in normal body tissue. If they enter the central nervous system, they cause neurocysticercosis — the most severe form of the disease.

Neurocysticercosis is most commonly first seen in seizures or headaches. Seizures typically affect those between ages 20 and 50, and are the first-seen symptom for about 70 to 90 percent of acute cases diagnosed, caused by active cysts in the brain. Headaches can signal increased pressure inside the skull, fluid buildup, or inflammation of the brain and spinal cord. A small percentage of those affected will also develop abnormalities in their gait, visual ability or mental states. The symptoms for each case vary depending on how the cysts progress, either degenerating or calcifying where they are located, and also depending on where in the brain the cysts develop.

To diagnose neurocysticercosis, brain imaging must be used to view the location of the cysts as well as determine which type each cyst is, because everything affects how the patient is treated. MRIs provide the most accurate image of the brain’s anatomy and shows the cysts clearly, but a CT scan more clearly depicts calcified cysts. If neurocysticercosis is suspected, both tests are usually conducted for a full picture of the infected brain.

Treatment of neurocysticercosis is fluid, and each case could require a different combination of the possible treatments depending on the severity of the symptoms shown and the stages of the cysts present in the body. Possible treatment measures include anti-epileptic drugs to control the seizures, surgical procedures to remove the cysts such as neuroendoscopy for the cysts that are easily reachable and anti-inflammatory drugs such as corticosteroids to control inflammation of the brain and anthelmintic medications, which stun or kill the parasitic worms in the body to get them out without causing much damage to the infected host.

There are trials currently being performed to determine if prolonged periods of one or many of the treatment options are more effective than current methods, but so far no significant results have been released. The U.S. Centers for Disease Control and Prevention is developing better tests to quickly diagnose cysticercosis and advise health professionals on diagnosis and treatment, and are continuing efforts to spread education and awareness of the disease in the general public and hospitals alike.