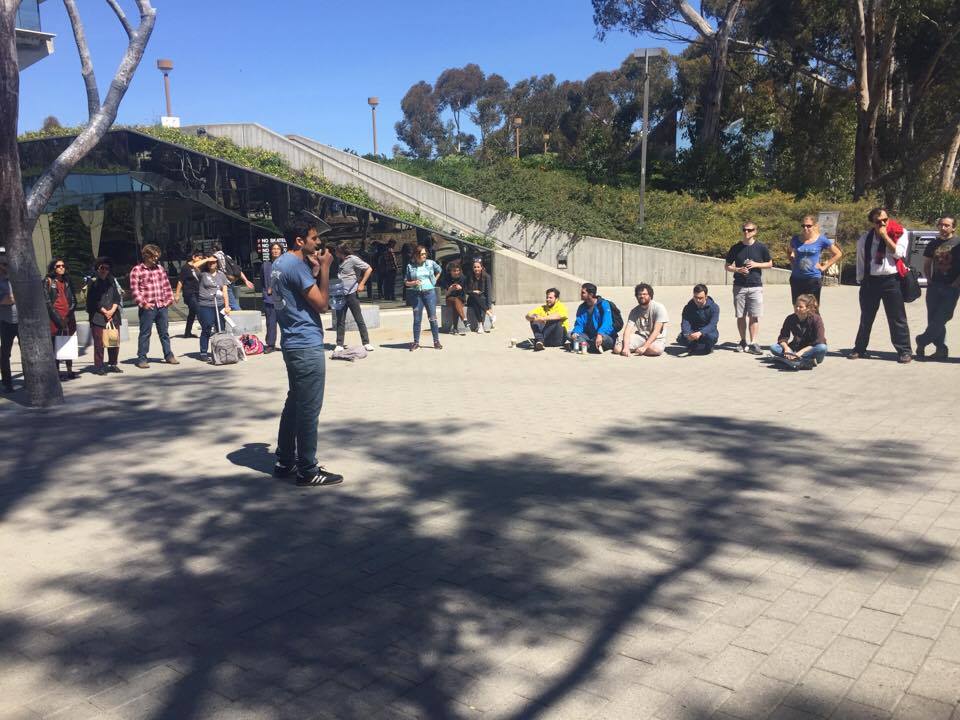 Students and faculty collected outside Geisel Library to demonstrate against the executive order President Trump issued on March 6 revising restrictions that he placed on migration from several majority-Muslim countries in January. The protesters met at the Silent Tree, where they gathered in a circle and listened to speeches.

Throughout the demonstration, students and faculty intermittently chanted phrases like “no ban, no wall”, “this is what democracy looks like” and “from Palestine to Mexico, these border walls have got to go.”

About half an hour into the protest, a few counter-protesters wearing Trump shirts arrived, drawing jeers from the crowd and prompting several speeches both advocating for tolerance of opposing views and condemning their beliefs.

A few of the protesters joined hands an hour into the protest and started dancing in a circle to the tune of “no ban, no wall” chants. Muir college senior Hamoun Dolatshahi, a protest organizer who also led the UCSD demonstration against the first executive order, thanked all the participants and pronounced and emphatic “Fuck Donald Trump” to conclude the protest.

Referred to as the “Muslim Ban”, President Trump’s initial executive order issued Jan. 27 prohibited citizens from Iraq, Syria, Iran, Libya, Somalia, Sudan and Yemen from entering the United States for at least 90 days. It additionally suspended refugee admissions for the following four months in order to allow for application reviews, which were supposed to prioritize Christian refugees over Muslims, and blocked the entry of Syrian refugees entirely.

After facing legal setbacks in the courts and heavy criticism, the Trump administration recently released an updated executive order that eliminated Iraqi nationals from the list of banned citizens and removed the language prioritizing Christians and prohibiting Syrian refugees. The updated order also made citizens of the six barred countries who are either U.S. legal permanent residents or visa-holders exempt from the ban. Had a Hawaii federal judge not partially blocked the new Muslim Ban yesterday afternoon, the entire executive order would have gone into effect today.

Dolatshahi explained to the UCSD Guardian that he believes it is important to protest the newer version of the Muslim Ban because while President Trump has changed some of the provisions of the executive order, it still discriminates against Muslims.

“This technical stuff has changed, but it does not change the message behind the ban, which is that Muslims are dangerous and they should be regulated and monitored because of being Muslim,” Dolatshahi said. “It is obvious that these countries who have been included in this list are not a threat to the United States in any way. Nobody from those countries has been accused of an act of terrorism toward any citizen of the United States. It is becoming this issue of criminalizing the Muslim body and thinking of us as suspects until proven innocent. For me it is important to go on and say that this ban is still racist, this ban is still Islamophobic. This is why we are having the protest.”

Nadah, an Earl Warren College junior who requested to keep her last name private, told the UCSD Guardian that she attended the protest to combat the passive acceptance of discriminatory policies.

“I was working with Hamoun originally on the first protest, and I feel like people have become desensitized to the issues and it has been normalized,” Nadah said. “We need to make sure that we are speaking out on these issues.”

“I think it’s kind of obvious that UCSD is an apathetic campus in every sense of the word except academic,” Pennée said. “I am here to counter that, to take up physical space and here to resist this deep racism and Trump and his campaign.”

Dolatshahi noted that as long as President Trump continues to issue policies that are discriminatory toward Muslims, “it is really important to show opposition, to show resistance to such policies.”

As with the first iteration of the Muslim Ban, protests against the second executive order have occurred nationwide in places such as airports.