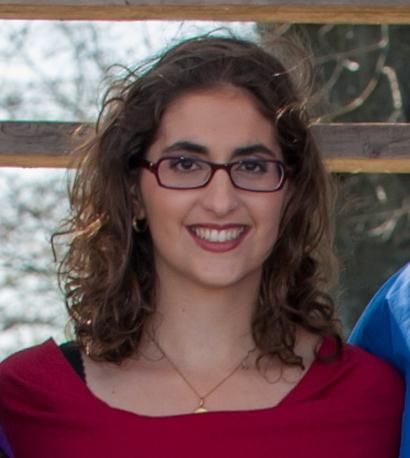 It is a wet day. I sit on the bright red couch in computer science professor Mia Minnes’ room, warming up from the weather outside. As she walks her previous guest out, I stare at the complex diagrams on portable whiteboards covered with even more figures than the main whiteboard. The painting above the couch has green tones that contrast with the sofa and her overhead bookshelf is completely full.

Minnes was born as Mor Minnes in Israel, a place full of short but meaningful names: she has a sister, Shir, and two brothers, Tom and Gal.

“Mor means the Hebrew version of myrrh,” Minnes explained. “If you’ve heard of frankincense and myrrh, it’s in the Bible in various places. It’s a pleasant smell or scent.”

Even as a child, she was academically advanced for her age. She attributes this to her sister, Shir, who is two years older. When Shir came back from school in first grade, she would teach Minnes everything she learned.

“The benefit or drawback of this arrangement was that when it came time for me to go to school, I had learnt it all. I ended up skipping a grade. I feel like I have always been surrounded by people who are older than me who pushed me to go further but have always been accepting.”

When she was seven, Minnes moved to Vancouver with her family. Canada, where she stayed from childhood through college, is still where she calls home.

“That is why I am loving the weather this week,” she says, happily gesturing out the window toward the dark skies. “It is very rainy and beautiful and gray. I do like San Diego weather though.” She paused. “It just doesn’t feel like home.”

“The only person I knew called Mia was Mia Farrow, the actress,” Minnes explained. “I didn’t want a name where I would go to the playground and hear a whole bunch of other Mias running around. Now, when I go to the grocery store, I hear a lot of ‘Mia, stop it’ or ‘Mia, turn around.’ I’m just thinking, ‘what am I doing wrong?’ But I chose it specifically so it wouldn’t be that common!” she laughed, feigning indignance.

She went on to Queen’s University in Kingston, Ontario. Minnes received a Bachelor of Arts degree in philosophy and a Bachelor of Engineering degree in a hybrid program called Math and Engineering with a Computer and Communications Focus. (“Another mouthful, just like my name,” she said, laughing.) She decided to do two degrees because she enjoyed thinking about how and why people know things as well as the endless applications of math.

“I was exploring a lot of epistemology, but then I also discovered logic and I fell in love with modal logics,” she excitedly told me in a self-proclaimed “geeky” fashion. “The communication was a whole ‘nother can of worms. It was fun but unconnected.”

Minnes took some time to deconstruct her interest in the two disciplines, leading her to graduate school in Cornell University, where she earned a doctorate in math after five years. When I asked her what her thesis was, she gleefully told me, “I’ll show you,” and stood up to pull a black book from her bookshelf.

“It was a very liberating time,” she says of her time at Cornell working for her Ph.D. “You can be very selfish and just work on your own research and focus on that, and your main responsibilities are about cultivating yourself as a scholar and becoming the expert in the world on your chosen field.” She smiled. “And I met my husband there.”

Minnes met Todd Kemp at Cornell’s welcome weekend, which he organized. Todd was four years older and already in the Ph.D. program. They met through a secretary at the university who knew Todd had experience commuting from Canada to Cornell.

“What Todd recommended was to take a cab. So I ended up taking a taxi across the border. Apparently you can do that!”

After welcome weekend, the two became friends; after a period of dating, they married in 2006. Her full name became “Mor Mia Minnes Kemp,” the same name most students will see on the registrar, though she prefers simply Mia Minnes in professional settings. Immediately afterward, her husband moved to Massachusetts Institute of Technology. They spent two years commuting between Boston and Ithaca.

“The commute is exactly five hours and 15 minutes, and we know that route very well,” Minnes said to my horrified face. By chance, a committee member for her Ph.D. program, Richard Shore, also lived in Boston. On Thursday afternoons, Minnes would carpool with Shore across upstate New York and spend the weekend with her husband.

Minnes joined her husband at MIT for a postdoc when she graduated from Cornell. Two years later, they both got positions at UCSD in the math department and moved to California.

“My first position at UCSD was a postdoc in the math department,” she says. “The opportunity to be a teaching professor in the [computer science and engineering] department came up, and I was thrilled because it was a perfect fit for me. My work is right at the interface of the two, so I’m just as happy talking to mathematicians as to computer scientists about my work.”

The classes Professor Minnes taught and currently teaches at UCSD include courses on mathematical logic, basic set theory and computability theory. At MIT, she taught a seminar on Kolmorgorov complexity (“It’s the idea of figuring out definitions and tests for distinct random events. It’s so cool,” she explained enthusiastically.)

She has also been very passionate about education throughout her career. Minnes says she’s happiest in quarters when she has a good balance between teaching and research. In recent years, she has been conducting research in education through the use of massive open online courses, or MOOCs. Professor Minnes along with a few other professors in the computer science department created an MOOC for those who wanted to gain an edge when applying for software engineering jobs.

“We had a blank canvas to put in all the best practices we knew of about teaching, like all of the cool pedagogical ideas we had but didn’t want to try on 200 innocent students in our classroom whose grades really mattered. We could be a little more experimental without scaring them.”

A lot of these educational “experiments” had a basis in psychology, such as the concept of fixed and growth mindsets. Essentially, those with a fixed intelligence mindset may believe that they are not suited to the subject when facing a difficult problem, whereas someone with a growth mindset will believe they only need to try harder.

Data from this research permeates Minnes’ teaching process. For example, the research suggests that stories from successful people about their struggles helps students embrace the growth mindset.

Some of the struggles Minnes has faced in her life have been a result of being a woman in the STEM field. While she was at Queen’s, she was one of three women in her classes. A good support system and mentors were important to her success, and she says she doesn’t take them for granted.

“Sometimes you can feel like you’re the weird one out, the person who’s sticking out a bit. Which I have to be honest, has its perks: you’re never overlooked,” she admitted, “but it can feel like a lot of pressure when you’re the odd one out.”

As someone who was out of step with the norm even as a child, Minnes says she has carried an imposter syndrome with her. Though anyone can have it, she tells me it’s particularly prevalent in minorities.

“They can also carry with them some of the stereotype threat where you feel like, by your actions, you’re going to confirm potentially negative stereotypes of the group,” she thought for a second and grinned, “like you’re carrying the mantle of womanhood.”

For Minnes, her imposter syndrome stems from the fact that she always had her foot in two worlds: math and computer science. “I’m not a real computer scientist nor am I a real mathematician,” she said she would think at times.

I asked her how she overcame her imposter syndrome. She let out a nervous laugh.

“Never? I don’t know many people who overcome it. I feel like it’s something that is with you. It just is … there,” she said sadly, smiling weakly. “Many, many, many days and yes, nights — especially nights — it rears its head, and I think what’s important then is to say, ‘I’m doing my best, and I keep improving and that I can’t be an imposter being me. As long as I’m true to me, then I am doing what I need to be doing.’”

We had been talking for a while. Minnes glanced at her iPhone. “I should see the time to make sure I’m not too late for picking my daughter up,” she said apologetically. “Natalie’s about to get up from her nap.”

I asked if I could quickly see some pictures. She agreed, lovingly pointing out a few blurry photos of her two young girls as she scrolls. “This is Anna, and this is Natalie. They’re about to turn six and two … we were at a gymnastics party … Natalie was just going non-stop the entire time,” she said, losing herself in the photos. “I have a bazillion; they’re really cute.”

She took one last look at the photos.