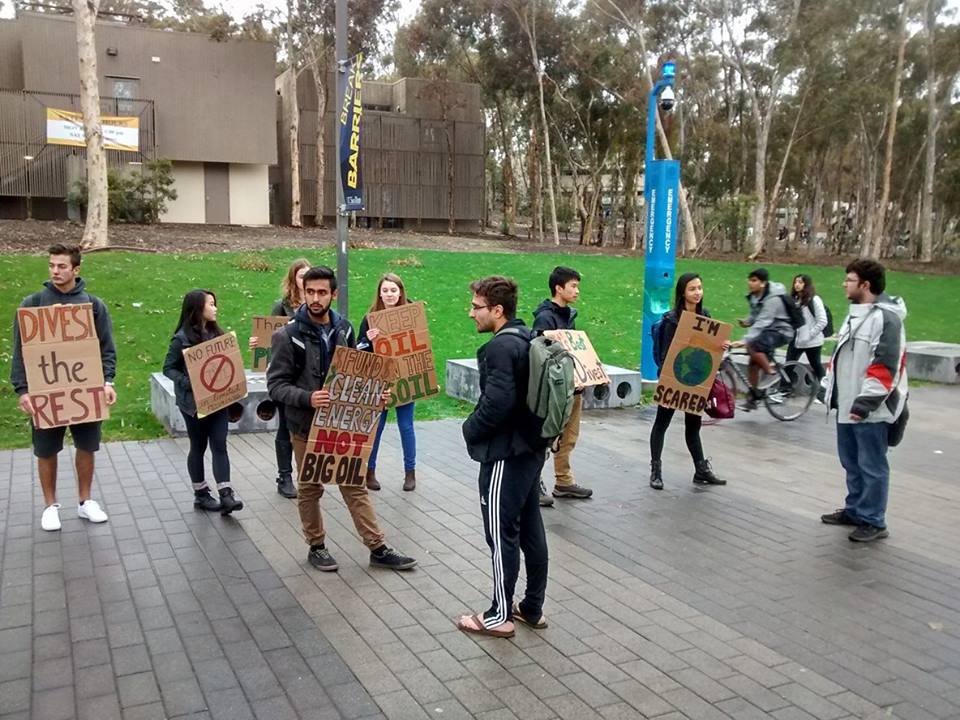 A handful of students gathered on Library Walk Monday afternoon to protest President Donald Trump’s denial of climate change and to demand that the UC Board of Regents divest from fossil fuels in response. Organized by the Student Sustainability Collective, the students held cardboard signs with messages such as “There is NO PLANET B” and “INVEST IN OUR FUTURE.”

The protest lasted approximately one hour, and the students mostly remained in front of Student Health Services for the duration, talking with passersby and chanting “DIVEST, DIVEST – leave fossil fuels to rest.”

“[Trump] has stacked his cabinet with climate deniers, white supremacists, and Wall Street bankers,” the statement reads. “We will not stand by this unjust and unsustainable decision.
There is no room for neutrality when the president of the United States is actively threatening the very future of this planet by protecting and profiting from the fossil fuel industry.”

According to John Muir College senior Mukta Kelkar, the protest was part of a larger movement that extends across the UC campuses.

“The movement is the Fossil Fuel UC Campaign, and we’re asking the University of California to divest from fossil fuel companies and reinvest in renewable energy,” Kelkar told the UCSD Guardian. “This is actually part of a statewide movement; all of the undergraduate campuses are having some kind of action today as part of an initiative across the nation as well. These actions are all tied to Trump’s inauguration and how much that administration has pushed for climate denial.”

The Sacramento Bee reported that UC Davis held its own rally, about 50 people strong, but there were no other articles describing any similar events at the rest of the UC campuses.

Bryant Jew, a sophomore from Earl Warren College, told the Guardian that while there are only about eight students in the campaign, they are hosting upcoming events to encourage more students to participate.

“We have a public meeting this Thursday at 4 p.m., we’re actually going to have an information session about steps you can take and how you can help,” Jew said. “We’re also going to have Fossil Fuel Divestment meetings weekly in the Sustainability Resource Center.”

Sixth College junior Natasha Gunawan emphasized the importance of  involvement, stating  “It’s pushing the UC Regents to consider this action more when there’s a large student body pushing for it.”

SSC has also launched campaigns calling for the elimination of plastic water bottles on campus and increasing accessibility to bicycles by repurposing abandoned ones.